« Red color wedding tradition
Colorful architecture all over the world » 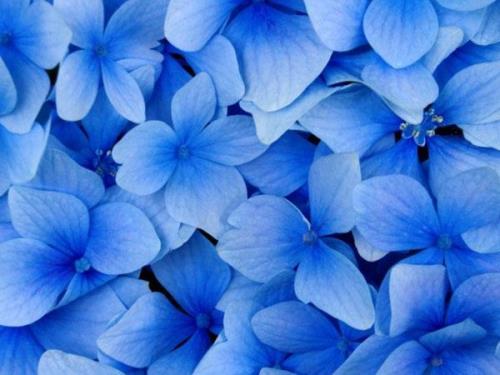 Blue color inspiration. Blue – the cleanest, coldest and deepest color that matches the rest, it’s a color of relaxation, recreation, sleep and recovery. It relieves nervousness and helps to eliminate all organic complaints caused by disorders of the nervous system. Blue is associated with a state of complete rest, so it has a calming effect on the central nervous system and the whole body. In the Orthodox religion, blue light of sapphire means peace and closeness to the heavens – that’s why domes of many churches have “Sapphire” color. The beautiful blue gemstone decorates the salaries of icons, crosses, church utensils. Yet, like other colors, blue is ambiguous and mysterious. Blue connotes reverie, sadness, and melancholy.

One of the amazing properties of blue – its ability to “expand the space”. Where there is blue, there is a feeling that time significantly slows down. Blue creates a sense of freshness, which is important for a quick sleep. Bedrooms are advisable to paint in blue and dark blue tones.

Blue is the color of creativity, so it is appropriate in schools. Blue color promotes better assimilation of information and the establishment of friendly relations, so it is good for the meeting room, and rooms for negotiations.

In most of the temples the ceilings have blue color. And in this case – it’s pure calm sky overhead, which promotes privacy while turning to God. Besides, this color is indispensable for shy and unsociable people. Blue color is good for relaxing of people experiencing fear. 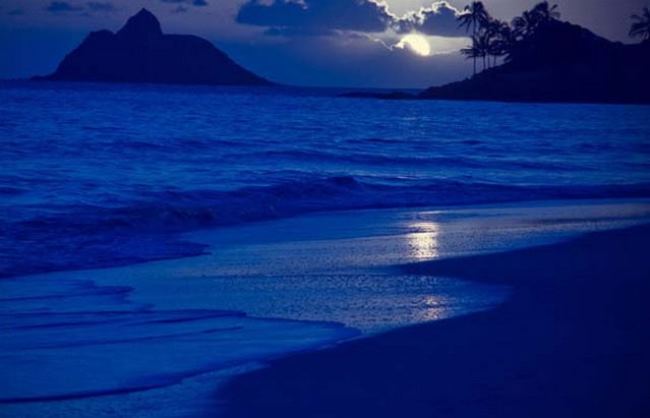 Oddly enough, blue was originally considered feminine. It was worn by the Virgin, the saints, the princesses. Just as red is considered a male: the color of kings.

More than half of infants do not perceive the blue color till the age of three years. And not enough, men are less susceptible to the effects of the blue, as opposed to women.

There are many shades of blue, so everyone will find its representative to his own taste. Blue is the white color with a bit of blue. It can also be mixed with yellow, creating shades of turquoise. And white, and yellow – they are different sides of the female personality. Thus, the blue color is in contrast to the red – men’s aggression. It, as the water cools the flame: calm, comforting, relaxing. The woman also influences the man, making them a harmonious whole. That combination of blue color with red is the most complete and pleasant to the eye.

In world languages, words for the color blue came long after words for black, white, red, green, and yellow. This is surprising in view of the fact that both sky and water are blue and that this blueness is visible nearly everywhere. In all of Homer’s epics, with countless references to sky and water (as in “the wine-dark sea”) there is no mention of the color blue. Similarly, with hundreds of references to the sky and heaven in the Bible, the word blue never appears. Perhaps this was because the early writers felt the color blue to be ethereal and insubstantial – essentially unreal, unlike the colors red, white, black, green, and yellow, which were viewed differently. Blue evokes the void or vast distances, as in something disappearing “into the wild blue yonder.”

“Blue is the color of the millennium [the twenty-first century],” according to a recent announcement by a color-prediction firm, the Color Portfolio. “It is serene and pure, like the ocean…”

In its darker versions, blue represents authority (the prototypical elected official’s dark blue suit), and, in the symbolic meaning of colors in dreams, blue means success. Both the Ford Motor Company, founded by Henry Ford, the quintessential authoritarian manager, and IBM adopted blue as an identifying color. IBM came to be known as “Big Blue,” linking it with the success aspect of the color. In its paler versions, blue means happiness. In Christianity, the Madonna is usually clothed in blue, symbolizing fidelity, as reflected in our modern phrase “true blue.” 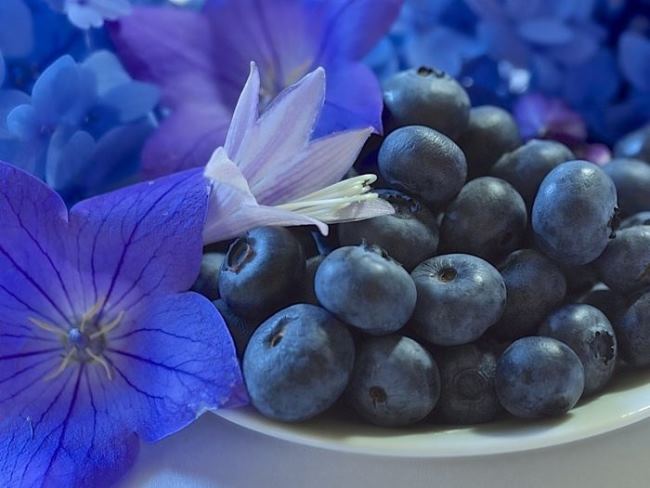 Picasso, in his “blue period” paintings, depicted the lowlife of Paris with its sadness and poverty (Figure 12-21). When Picasso’s mood improved (along with his living conditions), he initiated his “rose period.” And how many hundreds of sad songs have the words blue or blues in the titles? Enigmatically, blue signifies both immorality, as in “blue movies,” and Christian morality, as in “blue laws,” meaning laws to curb immoral behavior, and “bluenose,” meaning an excessively puritanical person.

‘Blue is a color that moves easily from reality to dream, from the present to the past, from the color of the daytime into the blue amorphous tones of deepest night and distance… In his Farbenlehre, Goethe called blue ‘the color of enchanting nothingness.’” Theroux, The Primary Colors 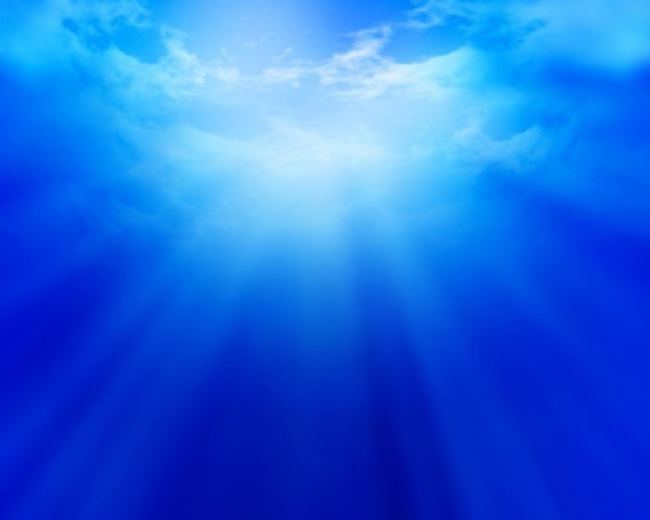 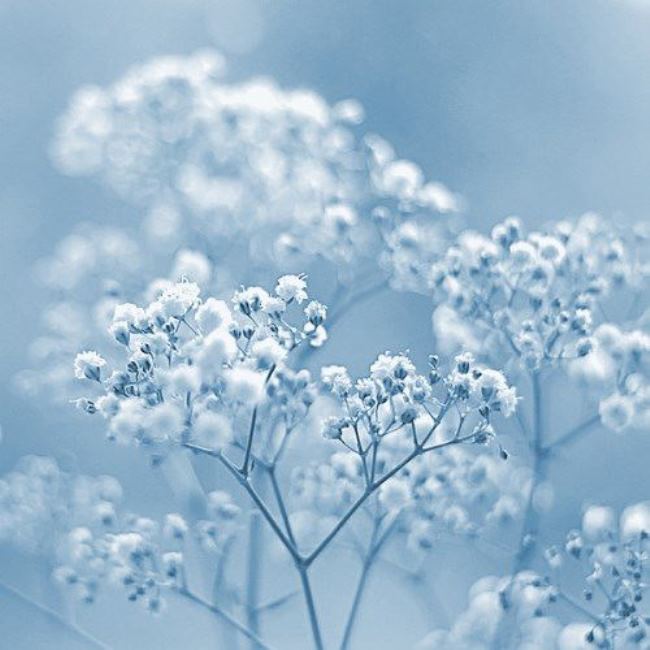 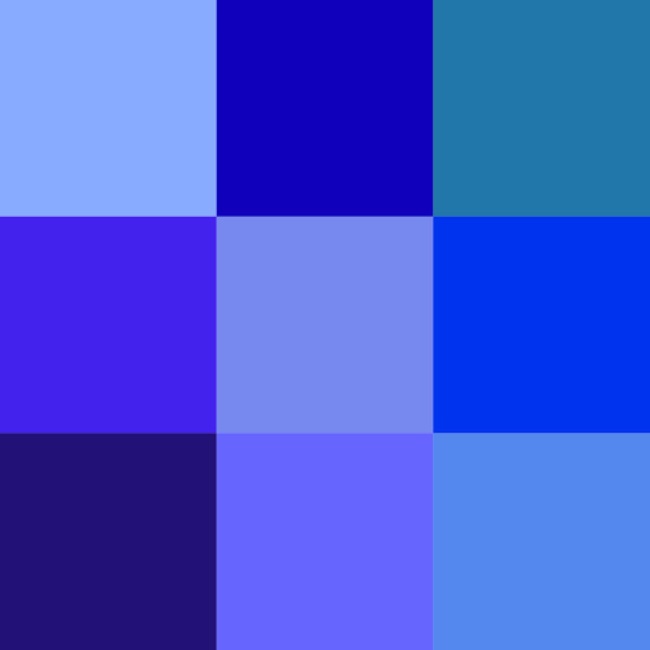 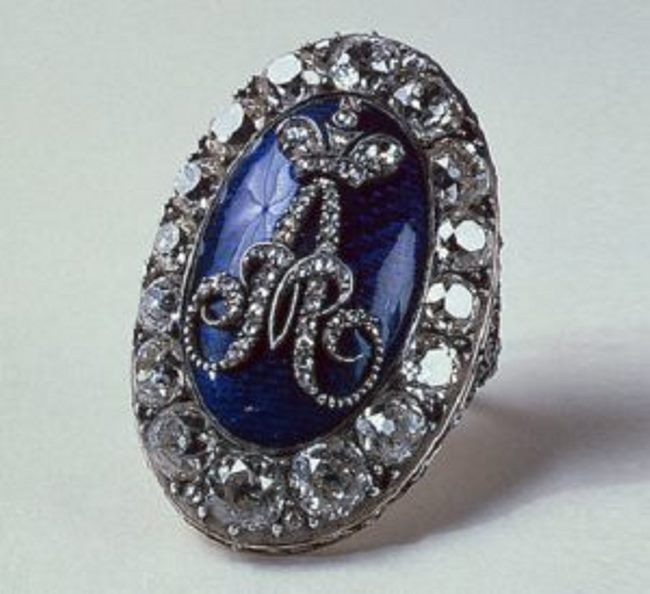 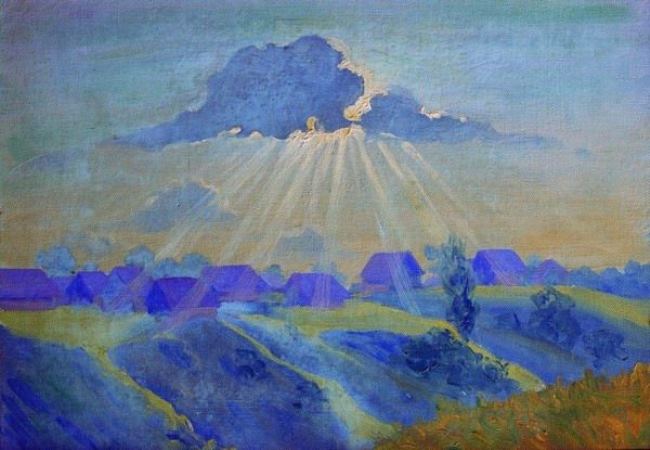 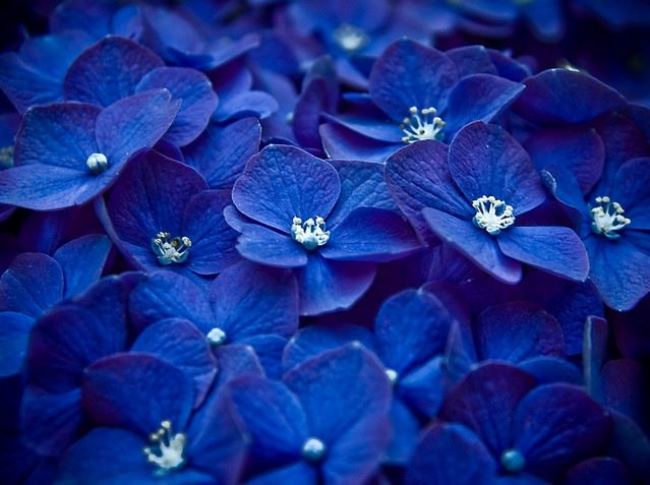 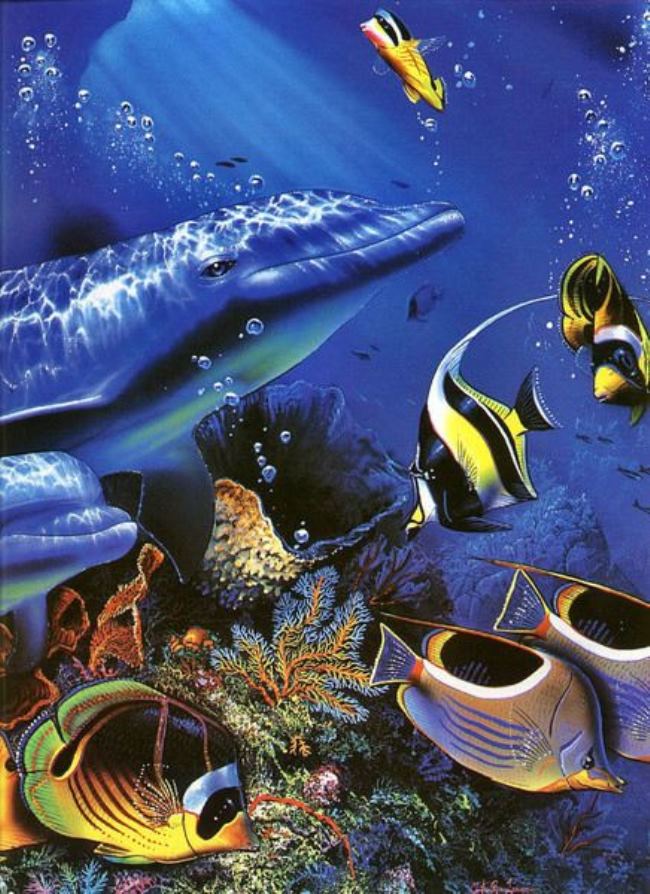 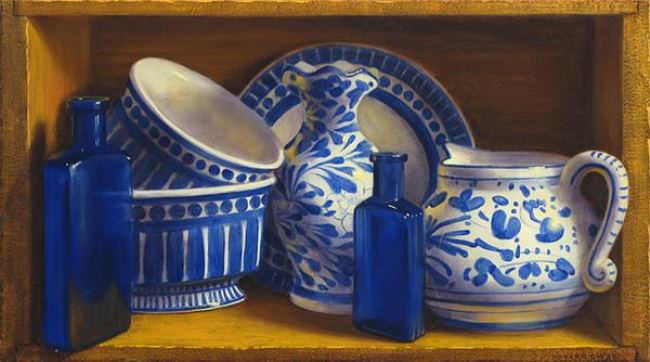 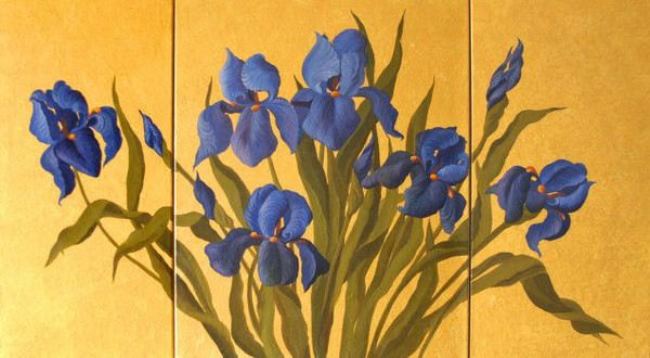 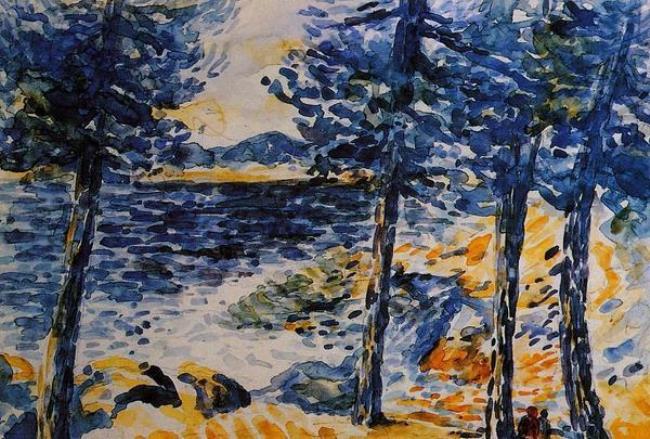 Henri-Edmond Cross. Pines by the Sea 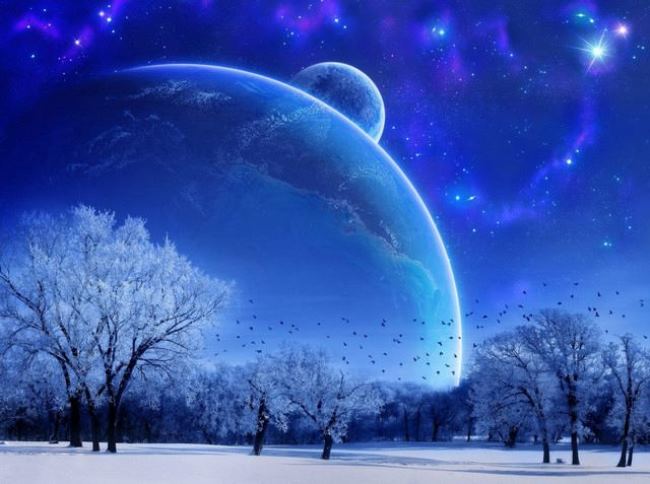 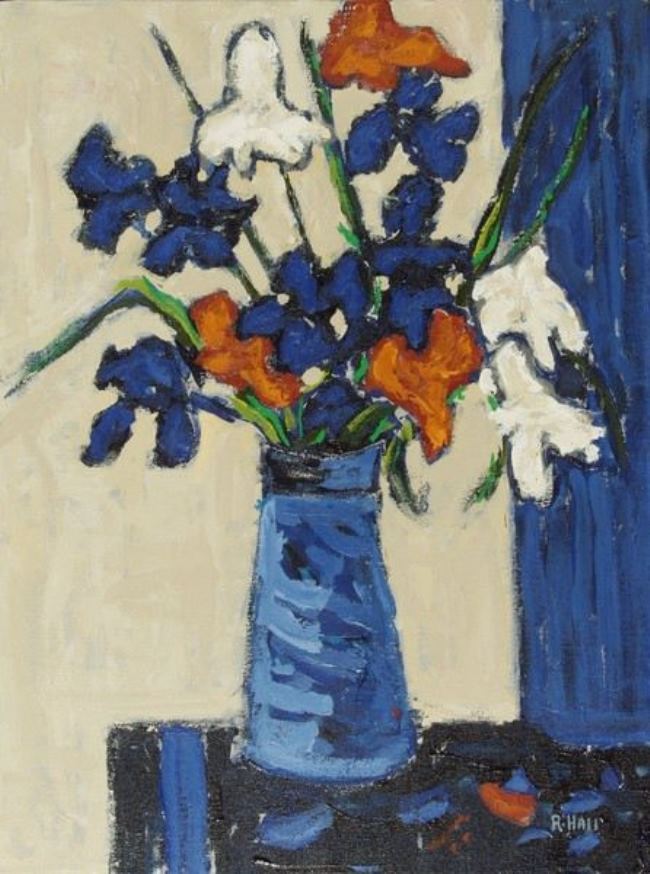 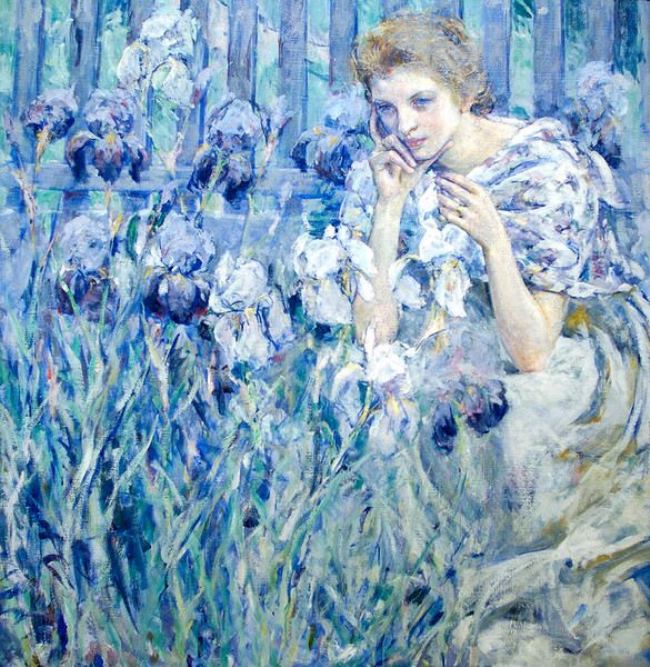 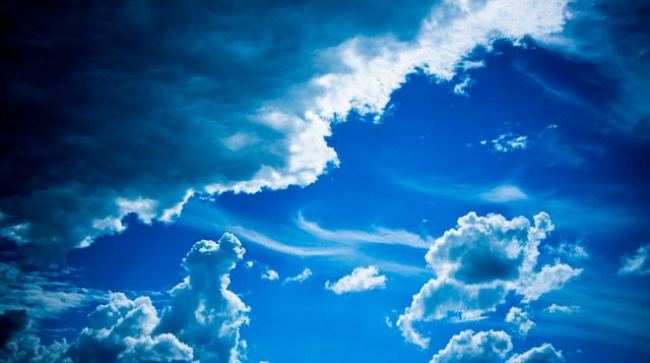