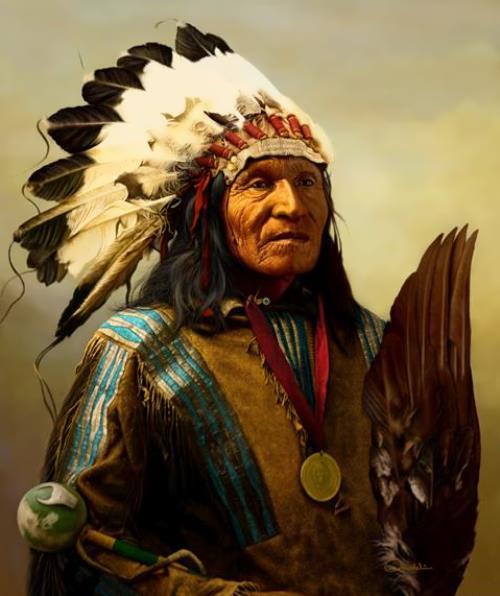 Christopher Columbus arrived in the New World on October 12, 1492. He thought he was in India, and when he saw a group of dark-skinned people he called them Indians. This was a mistake, but the name Indian stuck.
At the time of Columbus there were more than 2,000 tribes on the American continent. Each tribe had a different name and a different language. But all Indians could understand each other perfectly because they used one common language — sign language. Some tribes were hunters, some were farmers. Some of them were peaceful, others warlike.

Great Civilizations
The Maya, Aztecs, and Inca were powerful people who ruled vast empires. They built large cities and beautiful temples. The Aztec capital, Tenochtitlan, was built on an island in the middle of a beautiful lake. There were fine large buildings made of stone, wide roads and green gardens. The most spectacular buildings were the temples built on top of huge pyramids.

These tribes had many gods and practised human sacrifice. But in spite of the violence of their religion, these tribes were very civilized. They had mathematics and science and were skilled engineers and farmers. They could predict eclipses and the positions of some of the planets in the sky hundreds of years in advance.
The Maya were the only early civilization on the American continent who had a form of writing. They also invented the idea of zero before the Arabs did it in the Old World. 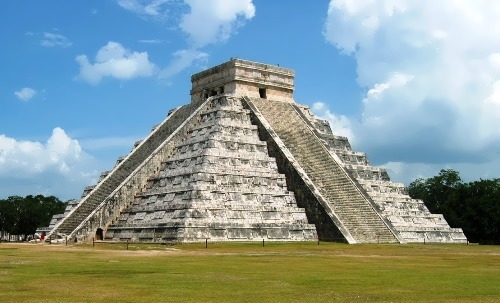 On the Great Plains lived nomadic Indians. They moved around to follow the buffalo, which provided people with everything they needed — food, clothing and shelter.
A warrior who killed an enemy brought home his scalp to prove it.
Powwows were one of the Plains Indian ceremonies. A powwow was a celebration or prayer to the Great Spirit. An important part of this ceremony was the Sun Dance. The Sun Dance took place in the summer months and lasted four days. During this time dancers performed the same exact movements and had nothing to eat or drink. They lifted their eyes to the sun for as long as they could endure it.
Another important dance was the Ghost Dance. This was a dance performed nightly in which the Indians believed that they could speak to the gods and their ancestors.
Some Indian tribes lived in the forests and their food, shelter, clothing, weapons, and tools came from the woods around them. The Woodland Indians built wigwams and longhouses. Wigwams were made by pending young trees to form a round framework which was then covered with pieces of tree bark and dried grass. Longhouses were long rectangular homes covered with bark sewn together.
The Woodland Indians found their food by hunting, fishing, and gathering berries, roots and nuts.
A canoe made from a dug-out tree was used to fish in the lakes and streams.
During hard times when food was almost impossible to find they would boil their moccasins for soup or chew on their clothing.
Indian hunters only killed what was needed to survive, never more. It was only when the white man started moving west that the slaughter of the buffalo began. Thousands of buffalo were killed for sport or to clear the land for the railroad.
The Indians who lived along the Pacific coast from California to Alaska, were fishermen and hunters. They used logs from the forest to build houses and totem poles. A totem pole was a tall, carved cedar log painted and decorated. It told a story of the family.
The Makah were a tribe of Northwest Indians. They were great whale hunters. This was very dangerous to hunt whales in a canoe.
The Comanche were fierce warriors and they were the first people on the Plains to use horses.
The Iroqouis were warriors, but they were famous for their hospitality.
The Cherokee were considered one of the most “civilized” Indian tribes of North America. They had their own government, laws, courts, and schools. A Cherokee Indian named Sequoyah invented a written language called “Talking Leaves”.
The Delaware were among the first Indians to come in contact with the Europeans as early as 1600. They were considered a “grandfather tribe” whose power and wisdom served to settle disputes among rival tribes. 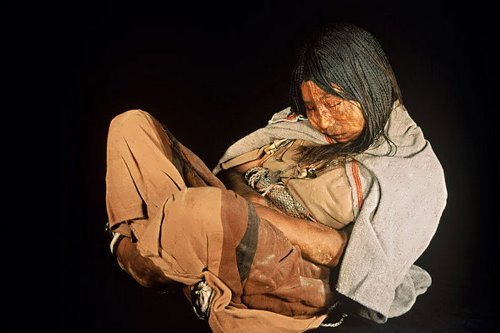 After 500 years in a frozen tomb an Inca mummy reveals the details of her last days. Barely in her teens, she was sacrificed to the gods on a high mountain

Two Cultures Meet
Indian life changed when Europeans arrived with their guns, their diseases and their hunger for land. The settlers wanted to take over tribal land, and the Indians were forced to move to reservations. Thousands of Indians were killed in battle, thousands of them died from measles, smallpox, tuberculosis, and other diseases brought by the whites.
The story of the Cherokee Indians is one of the saddest in the history of the US. This horribly long, sad journey of the Cherokee has become known in history as The Trail of Tears. They had to walk more than 1,600 kilometres to their new home when the whites came. It was a very cold winter and the Indians were barefoot and had no warm clothes. Their bloody footprints left trails of blood in the snow. They cried as they went because they were leaving the land they loved. 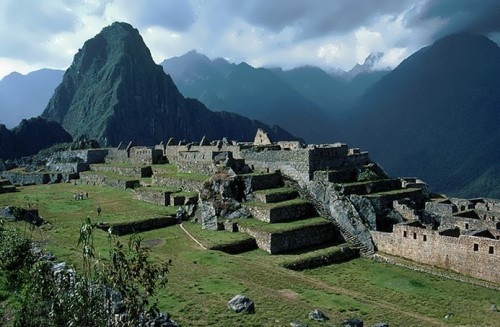 Machu Picchu, the fortified city of the Incas, which remained unknown until the 20th century

Native Americans Today
Today, there are about two million Native Americans in the United States. It isn’t easy for them to survive in the modern world. Many of them are unemployed or live in poverty.
Every Indian tribe even today has its own rituals and religious ceremonies. In everyday life they wear jeans and T-shirts, but on special occasions they put on their traditional clothes. Every Indian tribe has its own colorful style of clothing. 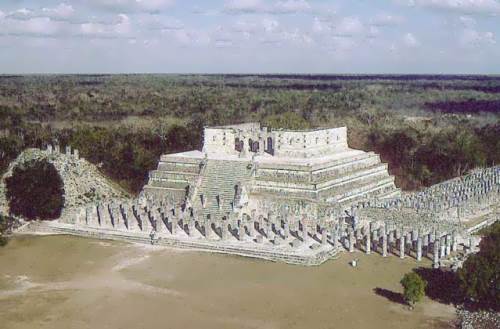 The Temple of Warriors in Chichen Itza, the last great capital of the Maya. When the first Europeans arrived here in 1517, the city was empty

Native American’s proverbs and words of wisdom
Don’t judge any man until you have walked two moons in his moccasins.
Beware of the man who does not talk, and the dog that does not bark.
Not every sweet root gives birth to sweet grass.
The soul would have no rainbow if the eyes had no tears.
Don’t be afraid to cry. It will free your mind of sorrowful thoughts.
A good chief gives, he does not take.
White men have too many chiefs.
We are made from Mother Earth and we go back to Mother Earth.
All plants are our brothers and sisters.
Every animal knows more than you do.
A brave man dies but once, a coward many times.
Make my enemy brave and strong, so that if defeated, I will not be ashamed.
Don’t walk behind me; I may not lead. Don’t walk in front of me; I may not follow. Walk beside me so that we may be as one.
You can’t wake a person who is pretending to be asleep.
Seek wisdom, not knowledge. Knowledge is of the past, wisdom is of the future.
A danger foreseen is half-avoided.
Ask questions from you heart and you will be answered from the heart.
Cherish youth but trust old age.
Don’t let yesterday use up too much of today.
Before eating, always have a little time to thank the food.
It is easy to be brave from a distance.
The weakness of the enemy makes our strength.
One finger cannot lift a pebble.
The coward shoots with shut eyes.
The frog does not drink up the pond in which he lives.
Those who have one foot in the canoe, and one foot in the boat, are going to fall into the river.
Respect the gift and the giver.
Give me knowledge, so I may have kindness for all.
With all things and in all things we are relatives.
We do not inherit the land, we borrow it from our children. 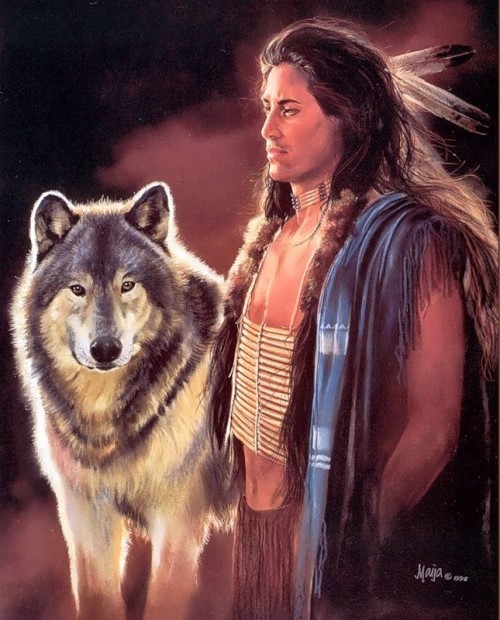 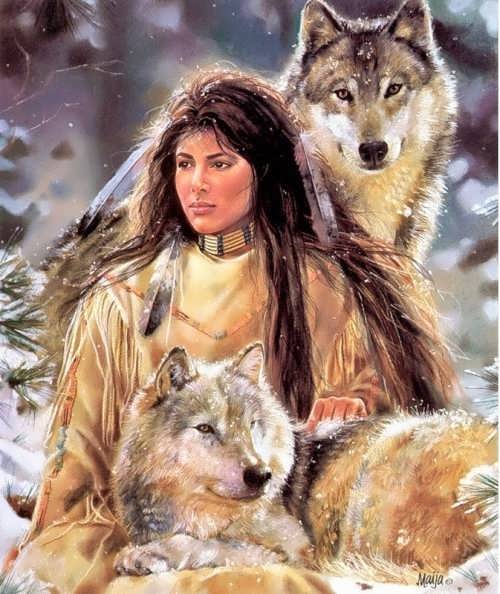 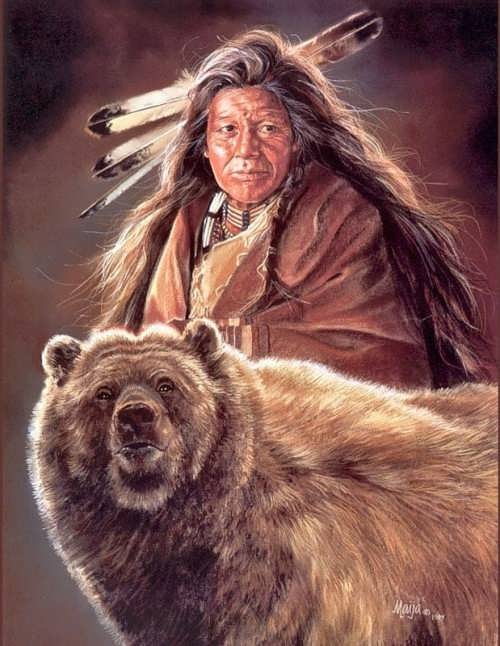 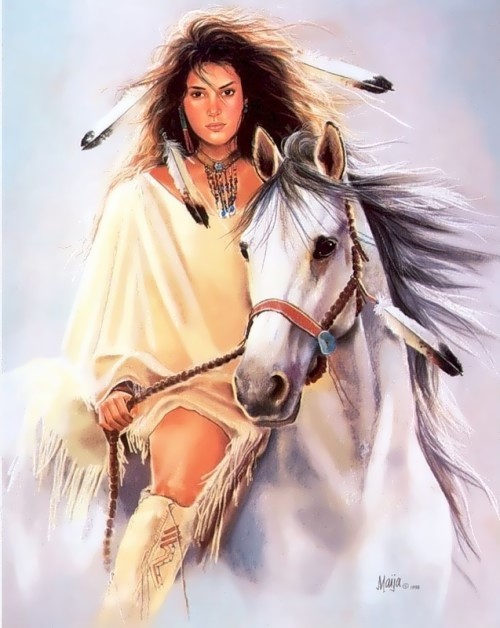 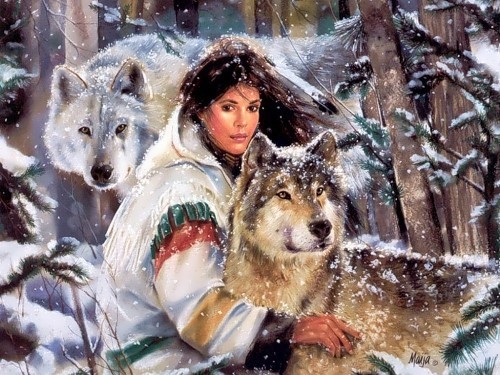 Spirit of the Wolf