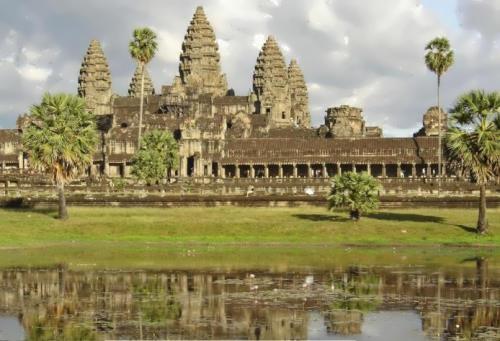 Angkor Wat is a large temple in Cambodia. Its outer walls and a moat are around the area of almost two square kilometers. This area is surrounded by dense forests. Here is a temple complex dedicated to Vishnu, the amazing construction of Hindu architecture.
The discoverer of this abandoned in the deep jungle surprising sanctuary was a French naturalist and geographer Henri Mouhot. During his travels in the countries of the Indian Peninsula, he was in Cambodia, where he heard stories of the lost forest city with temple buildings and stone images of gods. He learned about beautiful and extraordinary architecture of the temple, murals, which depicted gods, mythical figures, military scenes and stages of construction.
The Frenchman did not believe it. Similar stories he had heard during his travels in South India, but did not find anything. He heard the similar stories again and again. So, Henry decided to go into the jungle with several native people to check the information. They traveled by horses, elephants, and then on foot. It was an exhausting trip.

On January 22, 1861 Henri Mouhot came out of the jungle and saw a Hindu temple towers. The Frenchman took an album and began to draw. He was the first European who saw and drew Angkor Wat. Portuguese missionaries had seen it before Mouhot but neither described nor drew the temple. Unfortunately, Henri died in the same year of fever.
His book of essays with drawings “Journey to the kingdom of Siam, Cambodia, Laos, and other areas of central Indochina”, published in Paris, seven years after the author’s death, was a sensation in Europe. For the first time residents of Paris and other cities of the continent were able to read about the amazing life, culture and religious practices of the Hindus and the Khmer. They saw pictures of distant overseas lands and amazing architecture. 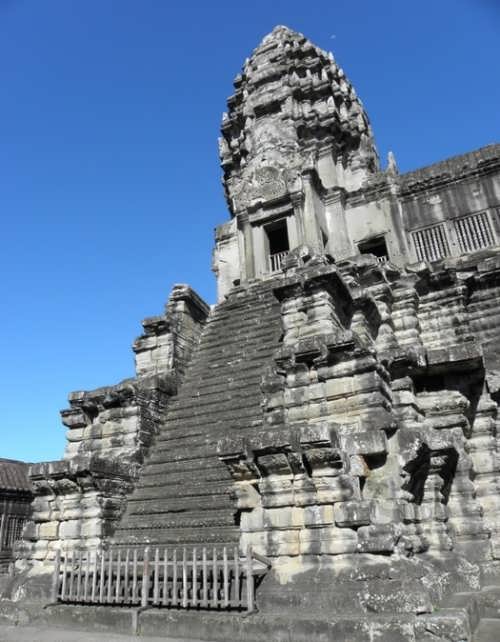 There are about 200 small temple buildings created from IX to XV centuries in the complex of Angkor Wat. The first builder was the Khmer king Yasovarman. For many decades Angkor Wat remained abandoned as the king died. The king Suryavarman II ordered to continue the construction, because he wanted to immortalize his name. The researchers found out that the complex served as a tomb of the king Suryavarman II.
The main temple stands on a stone base on the height of 13 m. It is a three-level structure with a gate, a lot of stairs and passages. It is surrounded by moats with water which symbolize the Indian Ocean. The temple is crowned with five pointed round towers. The central tower is 65 m high. It represents the mythical Mount Meru, which is considered the center of the world. There is the statue of the god Vishnu with the face similar to Suryavarman II’s face in the central tower. According to ancient tradition the kings identified with the gods.
Khmer Rouge (the communist movement in Cambodia) started in the 1970s caused damage to many temple complexes, including Angkor Wat. It was turned into a shelter and statues and sculptures of gods were damaged. These traces of destruction can be seen today.
Angkor Wat is probably the biggest religious building ever constructed by human. 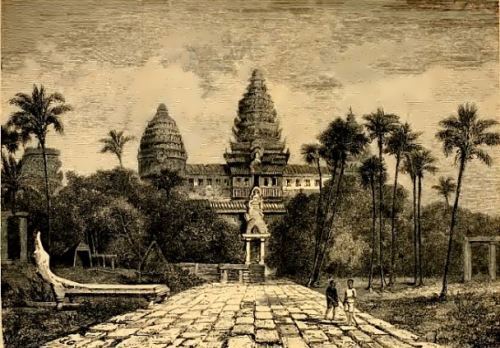 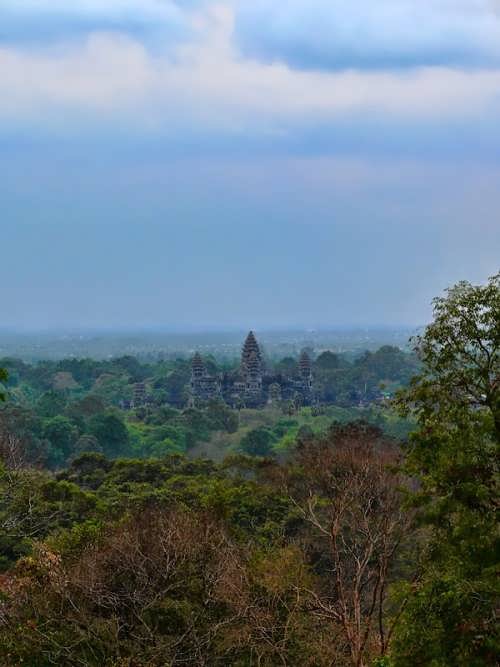 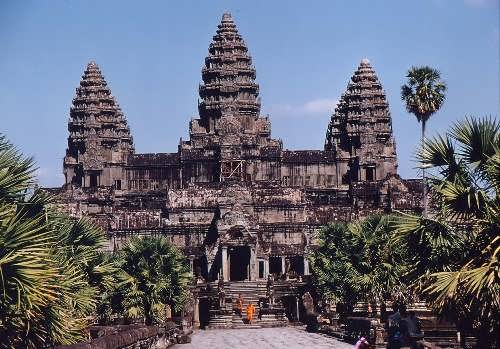 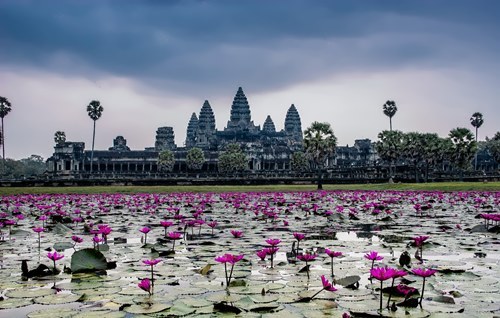 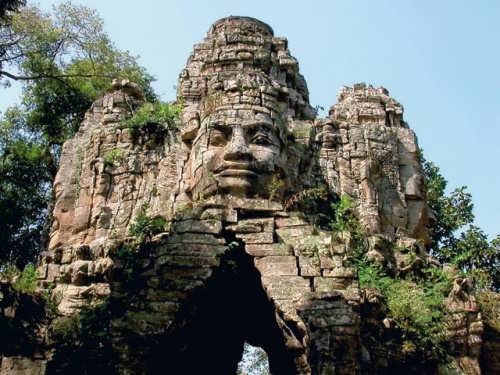 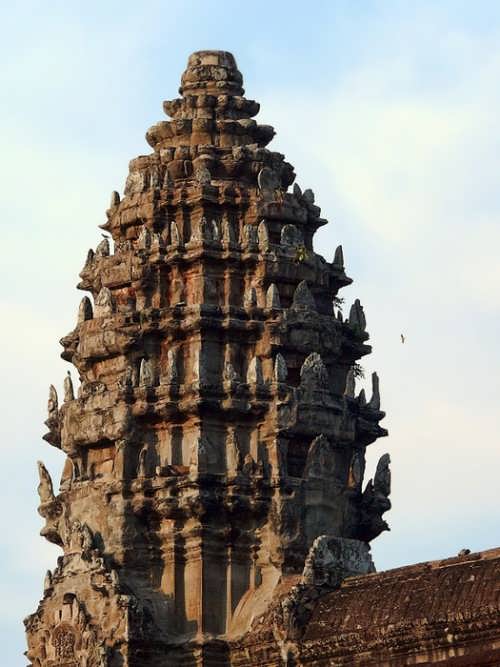 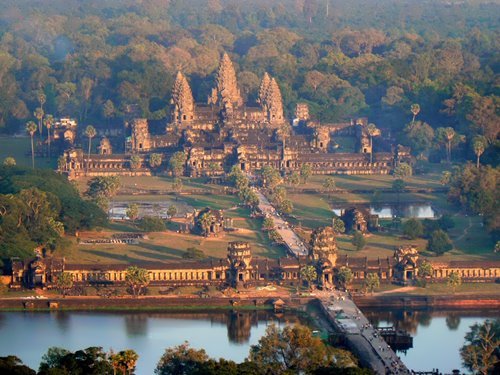 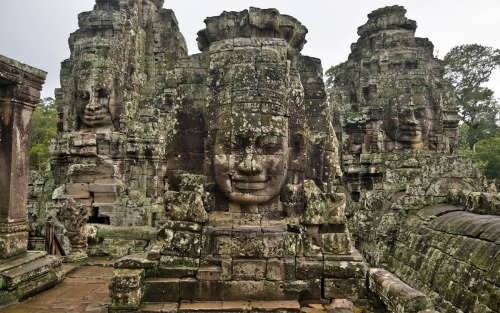 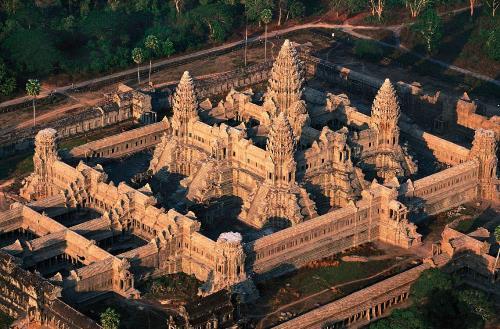 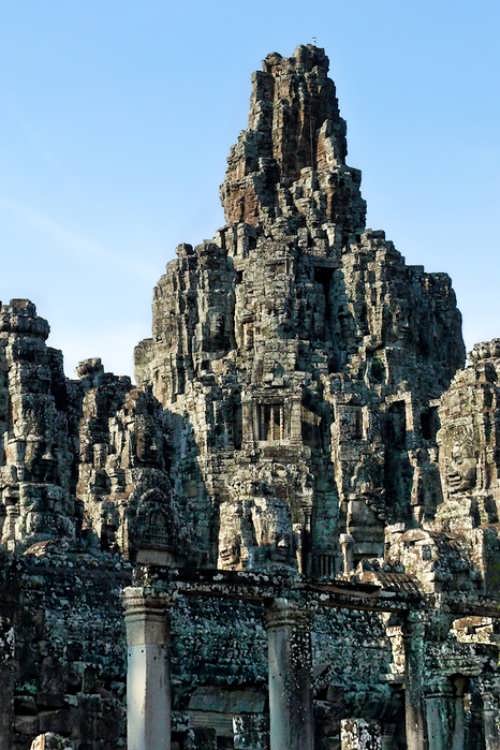 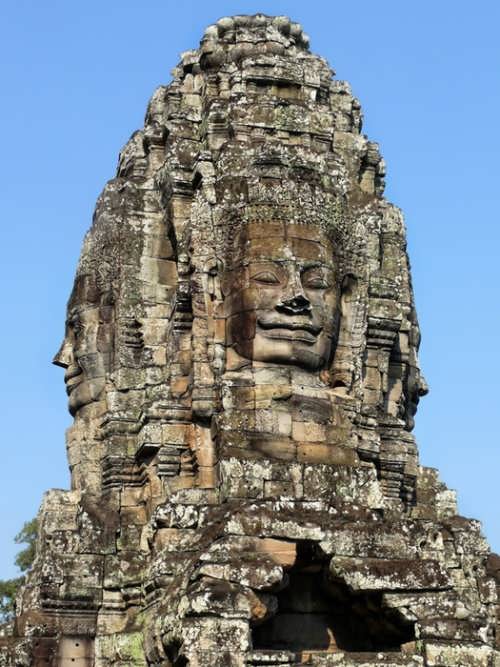 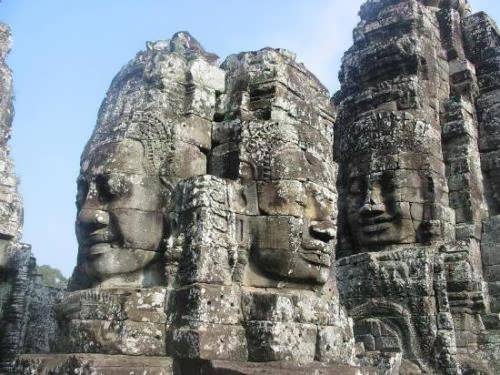 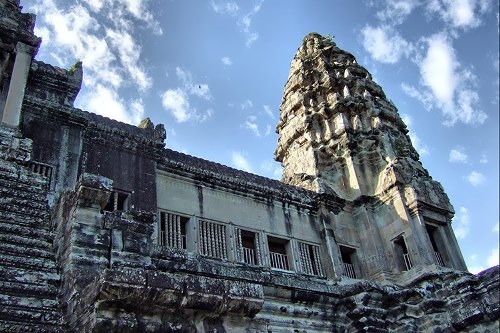 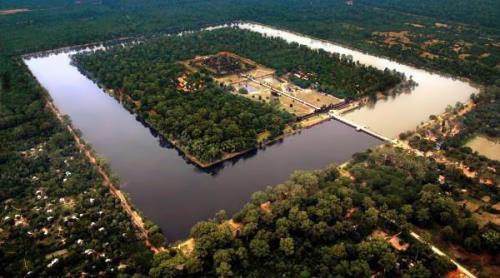 Angkor Wat from the air 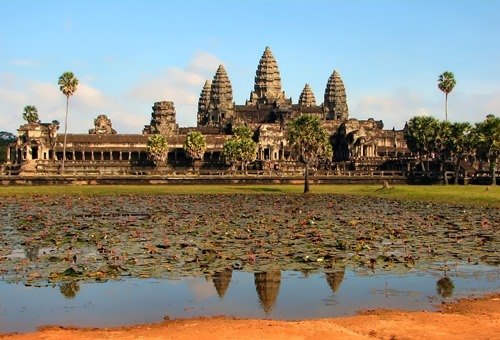 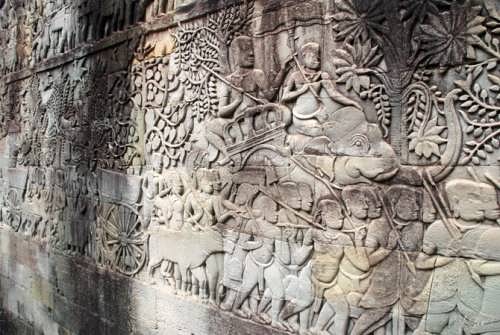 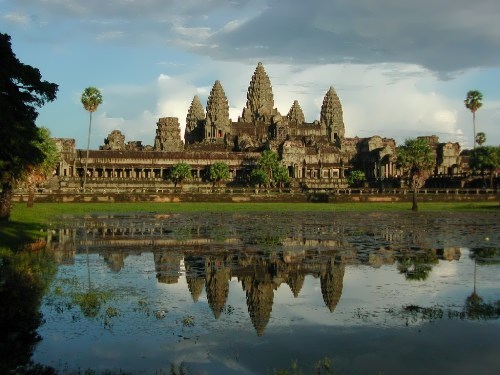 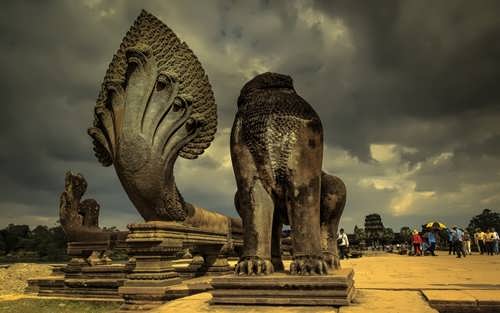 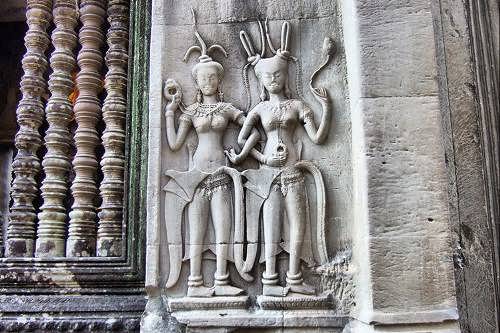 Heavenly apsara dancers on the walls of Angkor Wat 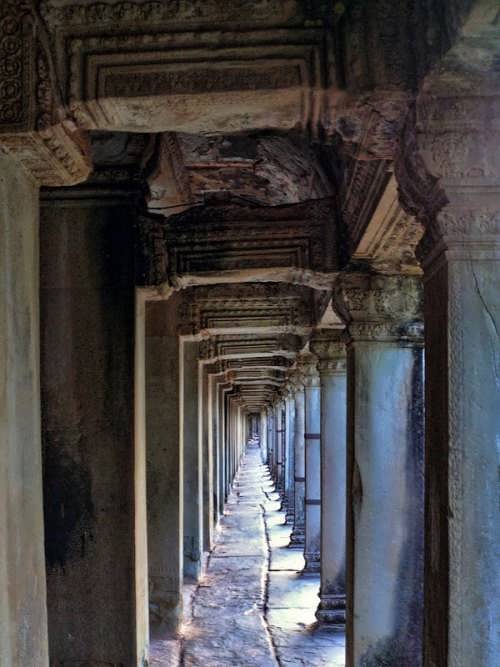 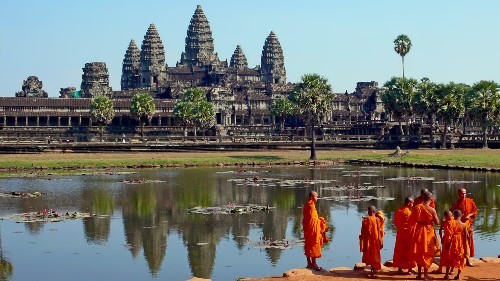 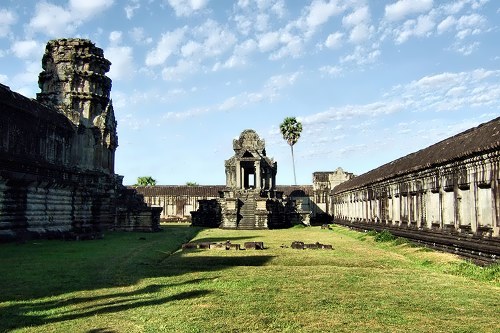 Outside wall of the temple 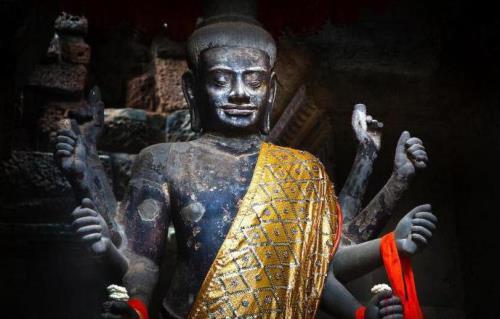 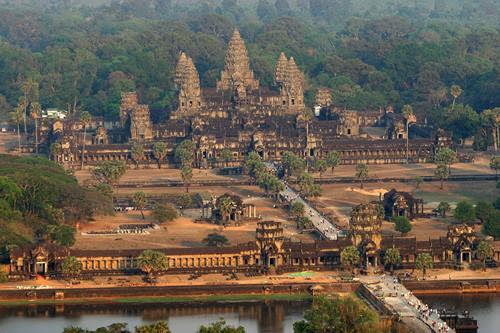 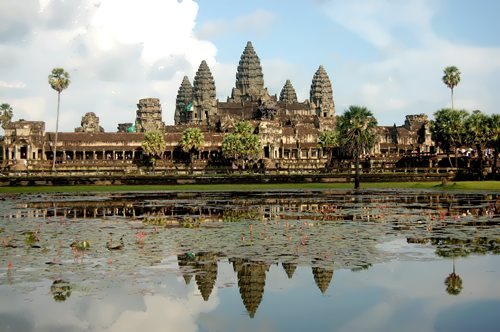 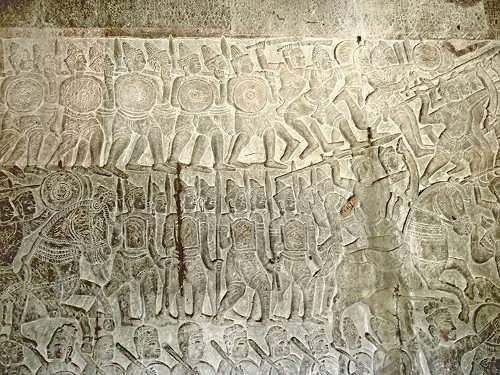 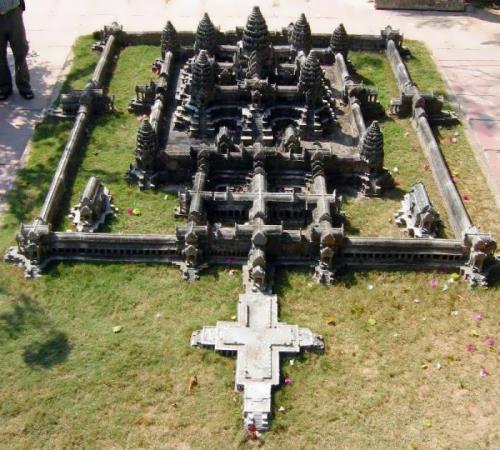