« Eyes – Mirror of Soul
Olive – Plant of Peace and Plenty »

For the first time, scientists learned about Baalbek (its subsequent ancient name is Heliopolis) when they got acquainted with the Egyptian inscriptions of the epoch of Pharaoh Akhenaten. According to their assumptions, the history of this Phoenician city, which ruins have remained, goes back centuries, and most likely Baalbek was founded much earlier than two thousand years before our era. Today, the ruins of a once majestic city can be seen in the Beqaa Valley, at the foot of the Anti-Lebanon Mountains, 85 km northeast of Beirut.
Originally the city was called Baal Beck in honor of the ancient Phoenicians deity Baal – the god of sun and fertility. According to legend, this deity was the patron and protector of the Phoenicians, helped them in work and battles. Men of this city knew how to speak beautifully, and women were famous for their beauty.

In addition, in Baalbek, there were the best flute players. Residents of the city erected beautiful temples dedicated to the deities of the sun, water and rain.
People worshiped the god Hadad in the main temple, but later for unknown reasons he turned into his opposite, comparable to the biblical Beelzebub, and sent a lot of misfortunes to the city… During one of the strongest earthquakes, the temple of Hadad was destroyed. The inhabitants considered this a bad omen and built a new temple on the site of the destroyed one. But it did not help them. 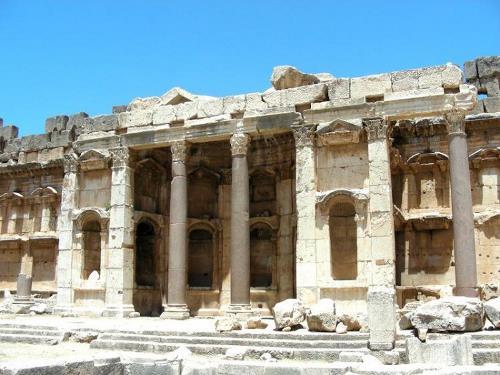 In the VIII-VII centuries BC conquerors from Assyria and then from Babylon came to this land. Later the land was captured by the army of the great commander Alexander of Macedon. The period of mastering Greek culture began in the city: sculptures of ancient gods and heroes appeared in the temples, and the city itself was renamed Heliopolis – Sun city.
After the death of Alexander of Macedon in 323 BC, his empire disintegrated and the Egyptians came to Heliopolis. In 64 BC, the Romans appeared in Baalbek, and it became the province of Syria. From the 1st to the 3rd century the period of Baalbek’s heyday began. People began to build the acropolis under the emperor Nero. Its stone terraces are amazing today. The length of monolithic stones laid in steps, reaches 20 m, and the weight of each is about 1000 tons. Even the Egyptian pyramid builders did not work with such huge blocks. Experts have calculated: to move such a huge piece of rock out of the spot, efforts of several tens of thousands of slaves are required. 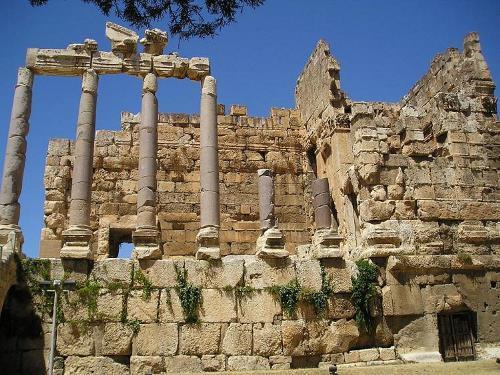 The yard of the acropolis is arranged in the form of a six-pointed star, this symbol is common in the East. You can see the remains of the great temple structures behind it. 84 columns once stood along the sides of the acropolis. They were brought from the quarries of Egypt on ships along the Mediterranean Sea to the shore, from which they were rolled and dragged to Baalbek. Each column is round, polished, 23 m long. Many of them were for the great temple of Jupiter. Now everything lies on the ground. The golden figure of Jupiter stood inside the temple.
To the left of the ruins of the temple of Jupiter you can see the remains of the temple of Bacchus, or Dionysus. This god of wine and fun, was loved by the Phoenicians. The temple of Venus, the Roman goddess of love, was also nearby.
Earthquakes as well as frequent wars destroyed once beautiful temples. Today Baalbek is a stone cemetery of the great architecture of the past. 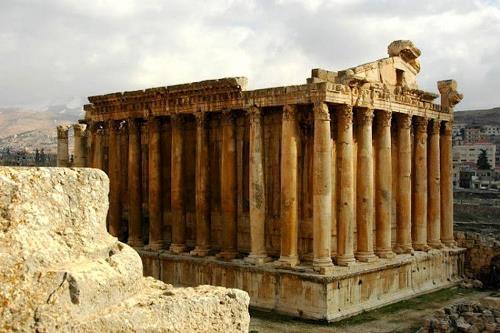 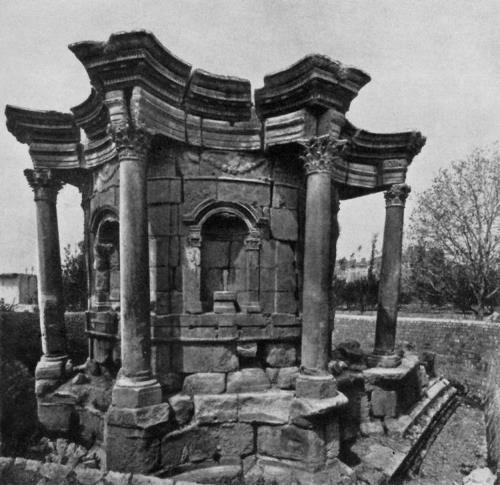 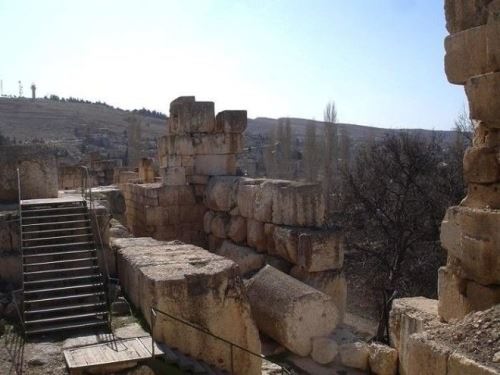 Floor in the temple of Jupiter 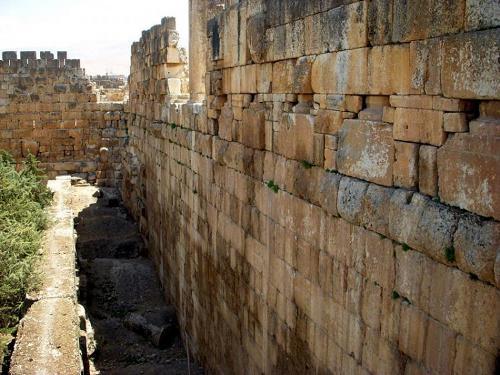 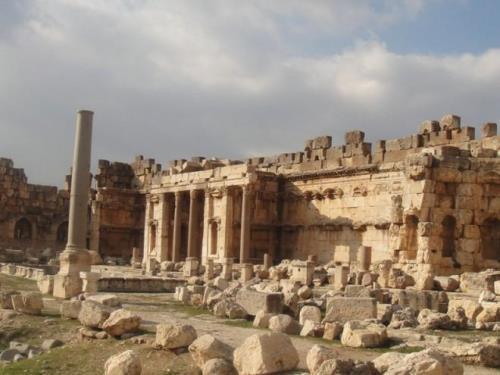 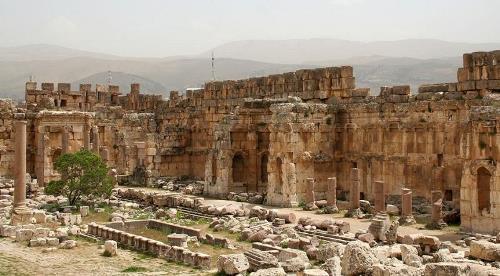 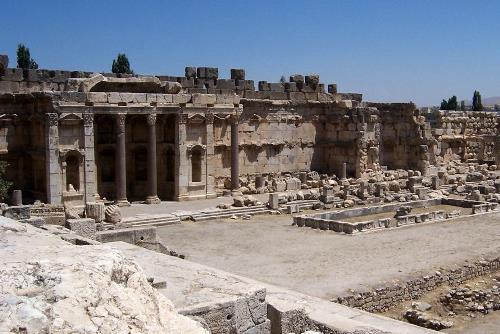 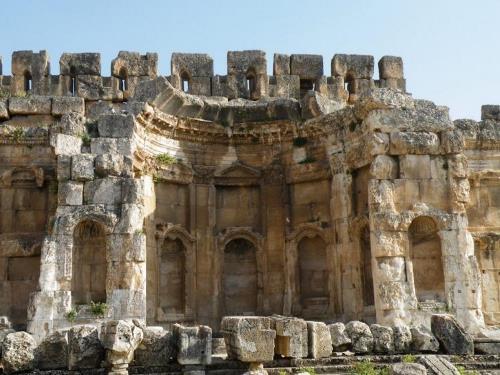 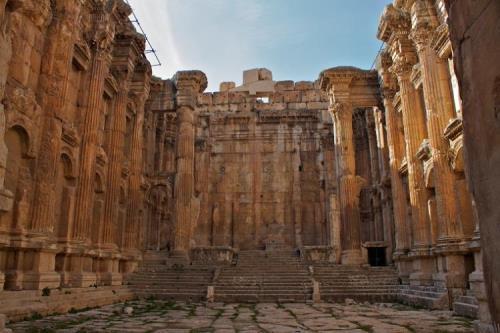 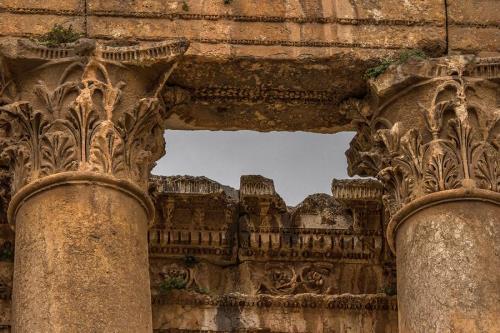 Part of the construction 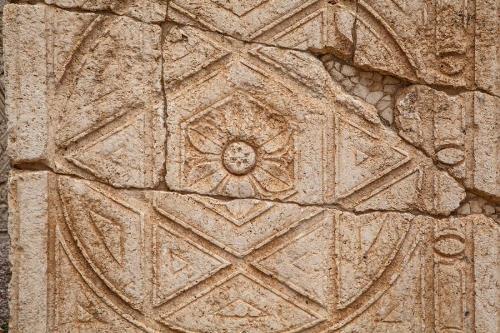 Part of the wall 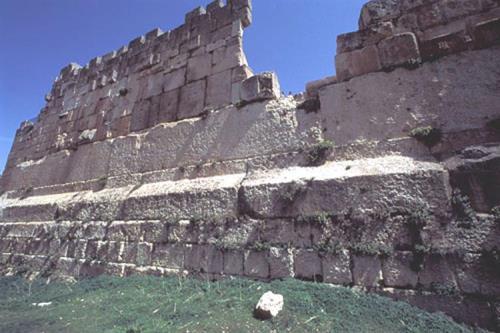 Ruins of the wall 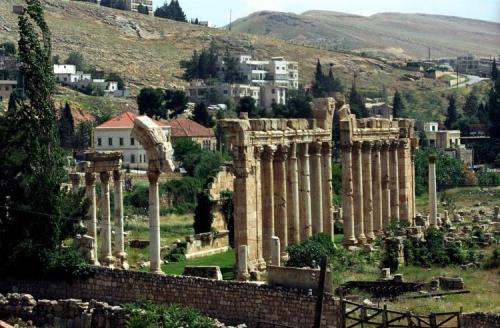 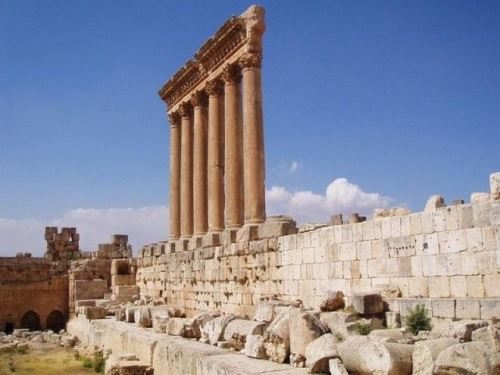 The highest columns on earth 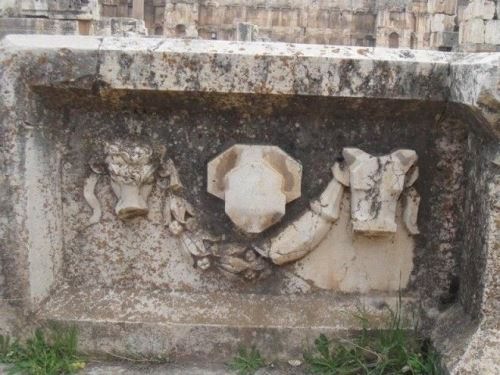 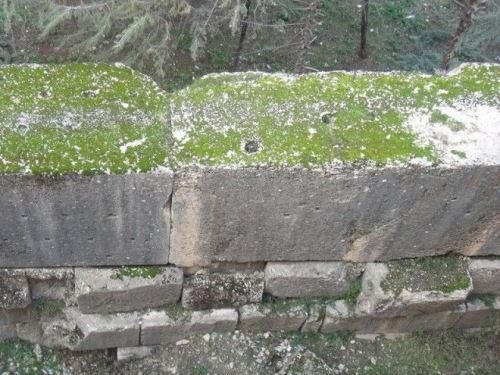