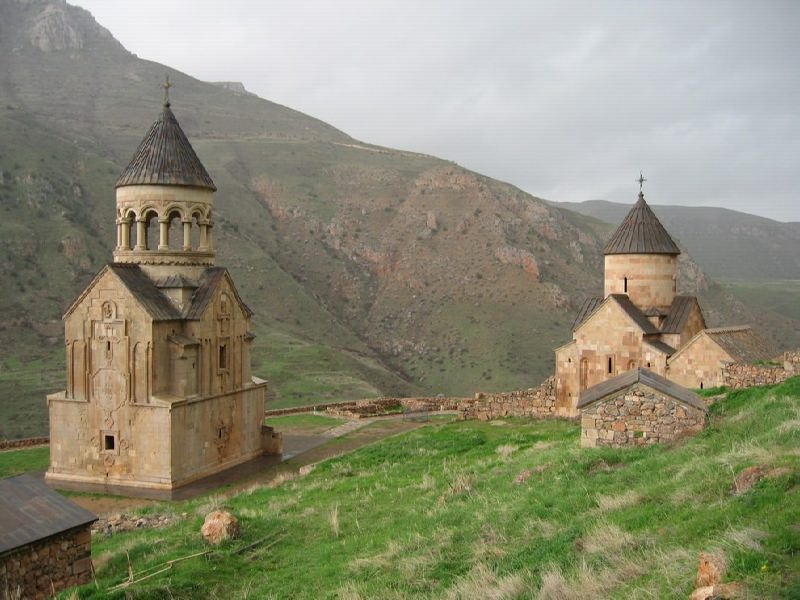 The Republic of Armenia is one of the world’s oldest centers of civilization. Armenia is located in western Asia, between the Black Sea and the Caspian Sea. It is bordered by Georgia, Azerbaijan, Iran, and Turkey. Armenia is a mountainous country. Mount Aragats (4,090 meters) is the highest peak. The country’s area is 29,800 square kilometers.
“Armenians call their country Ayastan—land of the Armenians. There is another name: Karastan—land of rock. More than 20 mountain ranges, with 900 peaks, cross this land. Roughly two-thirds of present-day Armenia is occupied by mountains, solid rock. And the remaining soil in the course of centuries has been trampled into rock by the hooves of conquerors’ horses.” So writes Gevorg Emin, a contemporary Armenian poet.

About 98 percent of the people are ethnic Armenians. There are small numbers of Kurds and other groups. Armenian is the official language. Most people are Christians of the Armenian Apostolic church. 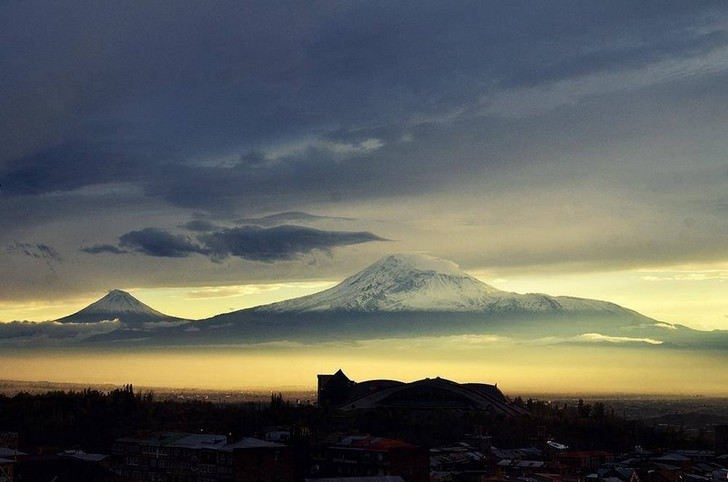 Armenian civilization began as early as the 500s BC and in the 1st century BC it reached its greatest size and influence. The Roman Empire conquered Armenia in 30 BC. From the 300s to the 1800s Persians, Byzantines, Arabs, Mongols, Turks, Russians, and others conquered and ruled Armenia. In the early 20th century, emerging Turkish nationalism led to the deportation or killing of 600,000 to 2,000,000 Armenians. After World War I Armenia enjoyed a brief period of independence.
In 1920 the Soviet Union invaded Armenia and forced it to accept a Communist government. On September 23, 1991, Armenia declared its independence from the Soviet Union.
Yerevan, the capital of the country, is one of the world’s oldest cities. A fortress was built there in 783 BC. The peaks of Mount Aragats, Mount Azhdaak, and Mount Ararat can be seen from the city. Mount Ararat is traditionally considered the place where Noah’s ark came to a rest at the end of the flood described in the Bible. 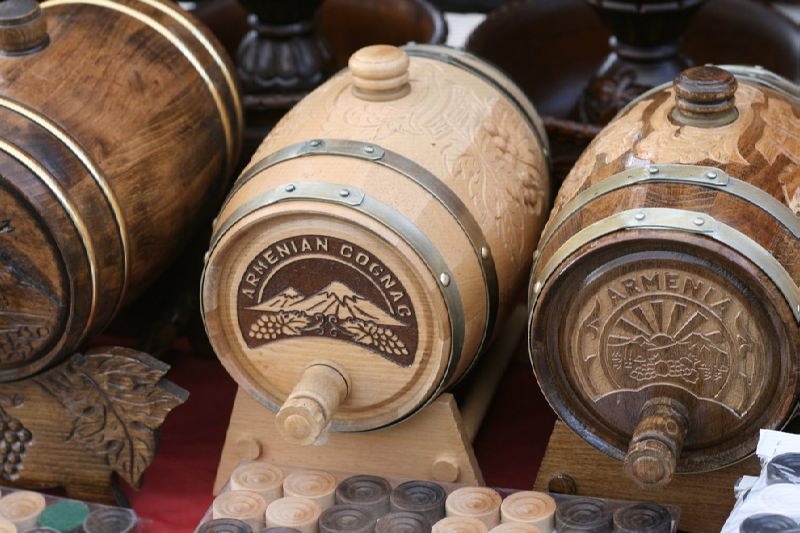 Armenia is famous for cognacs

Interesting facts
– On December 7, 1988, a strong earthquake in the northwest destroyed towns and killed about 25,000 people.
– Lake Sevan lies 2,070 m above sea level on the Armenian Plateau and is the country’s largest lake. The Aras River, which is 914 km long, is Armenia’s largest and longest river.
– There are many caves throughout Armenia, and several steep canyons. The longest cave is the Arjeri Cave in the Vayots Dzor region.
– The first church was built in Armenia.
– Apricot is a symbol of the country. The lower orange band on the Armenian flag symbolizes this fruit.
– In 2014, Armenian bread was included in the intangible heritage of UNESCO.
– Armenian cognac is famous all over the world and it was Winston Churchill’s favourite drink. 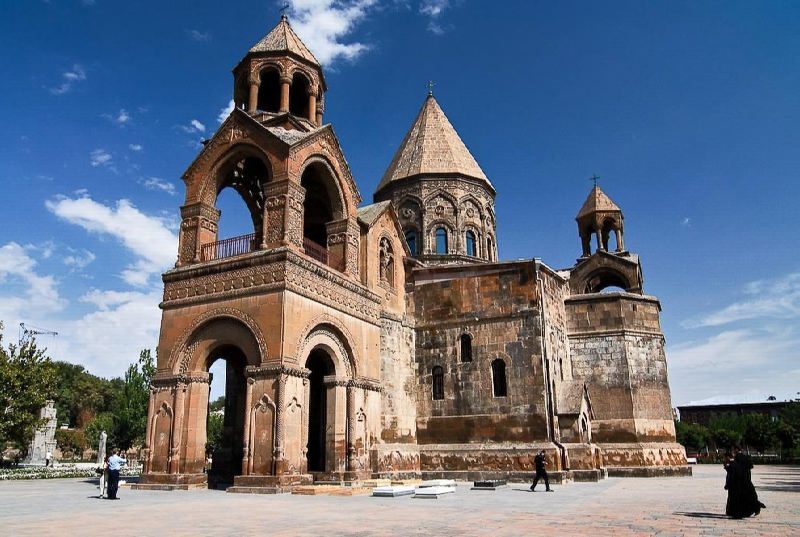 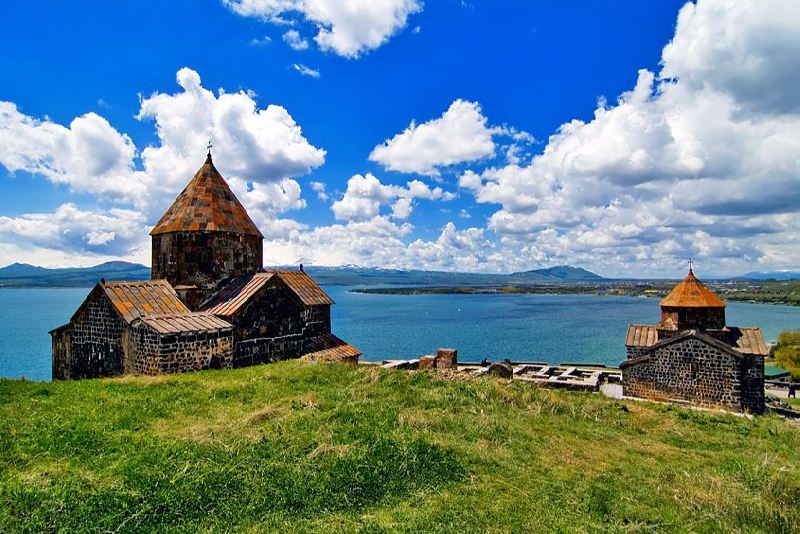 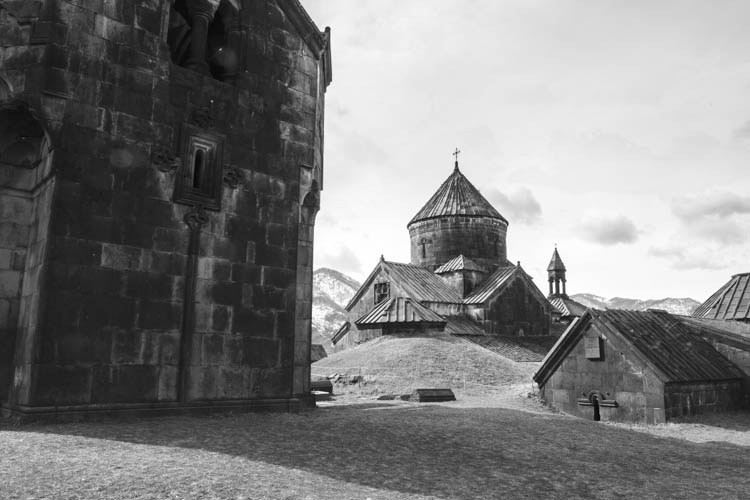 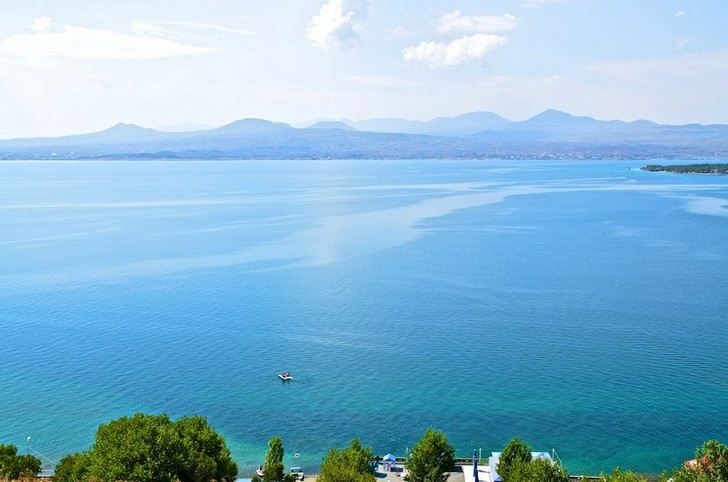 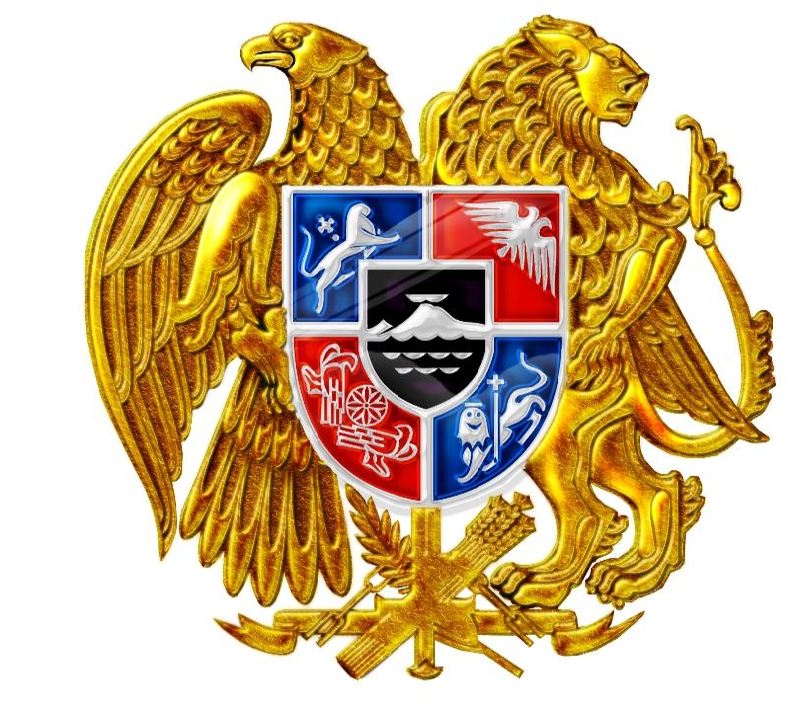 Coat of Arm of Armenia 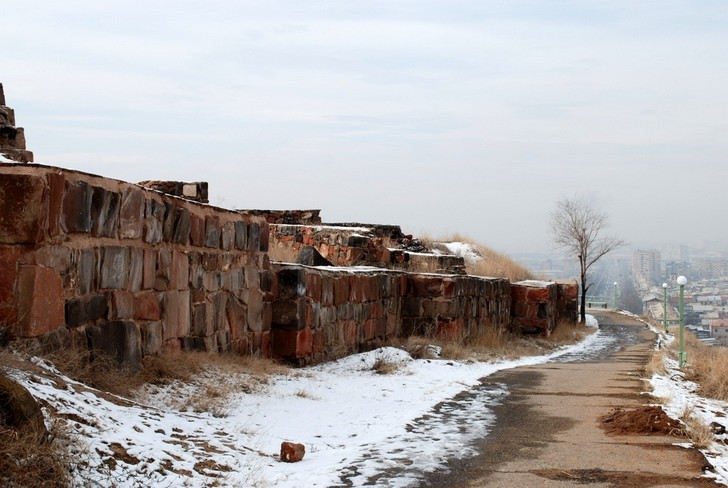 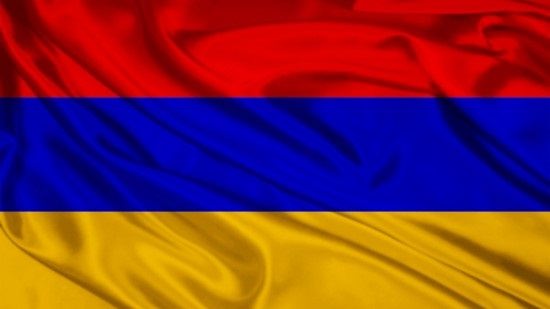 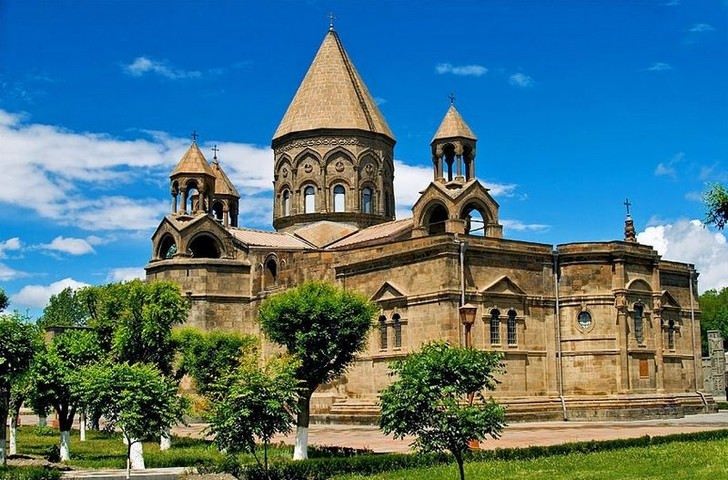 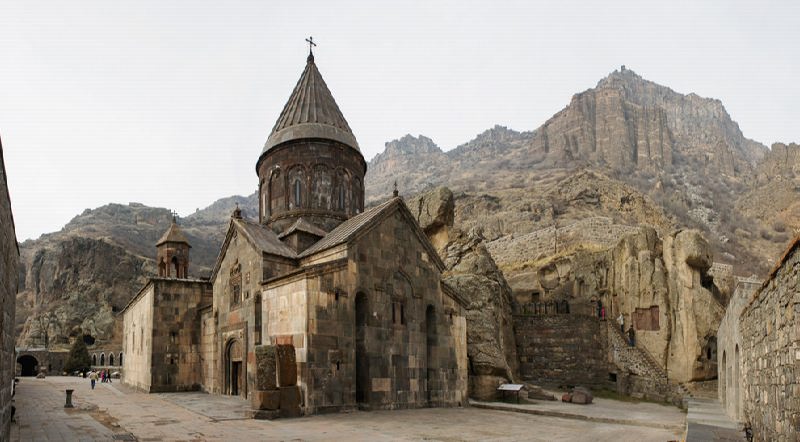 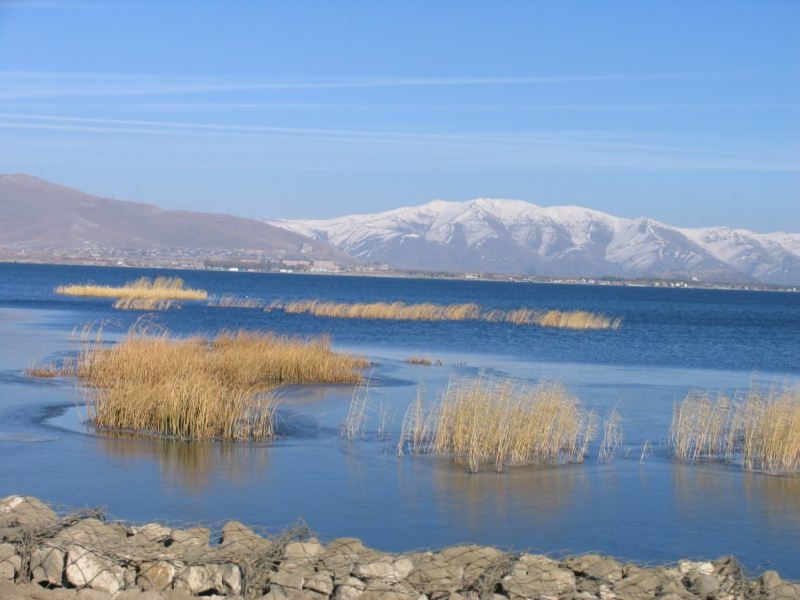 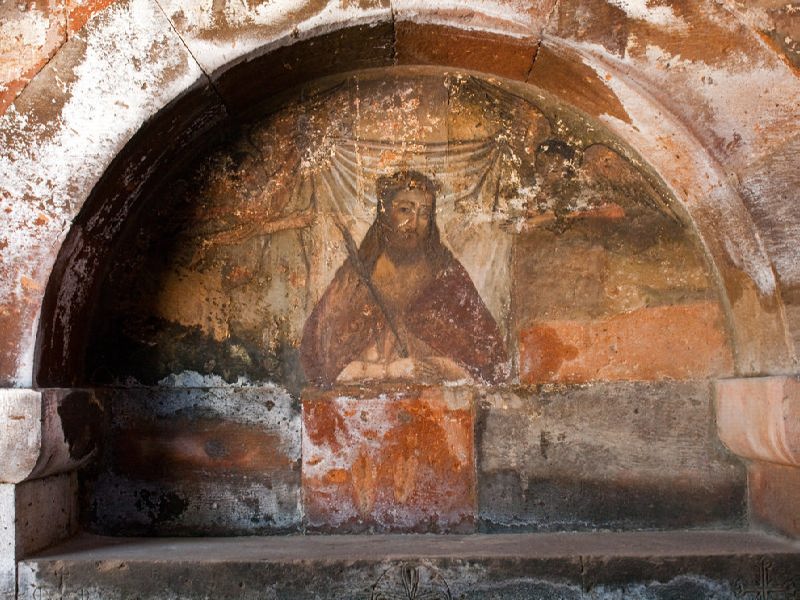 In 301 Armenia adopted Christianity as a state religion 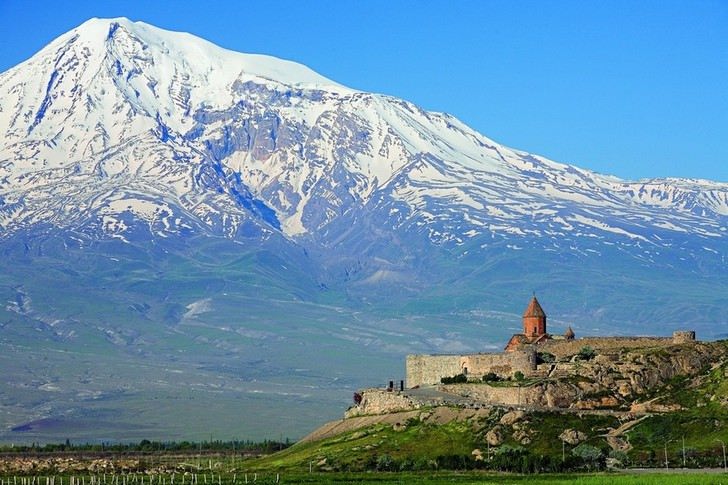 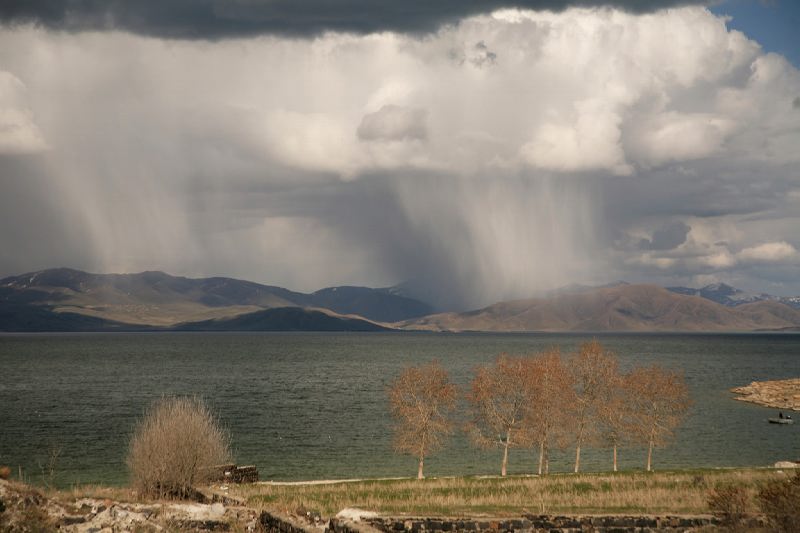 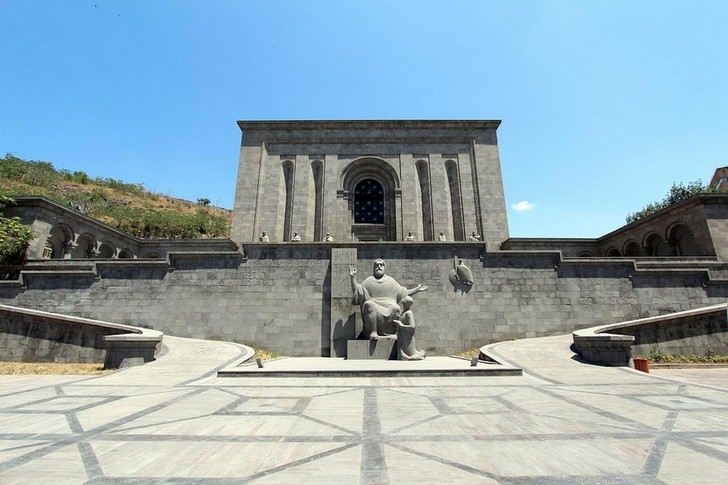 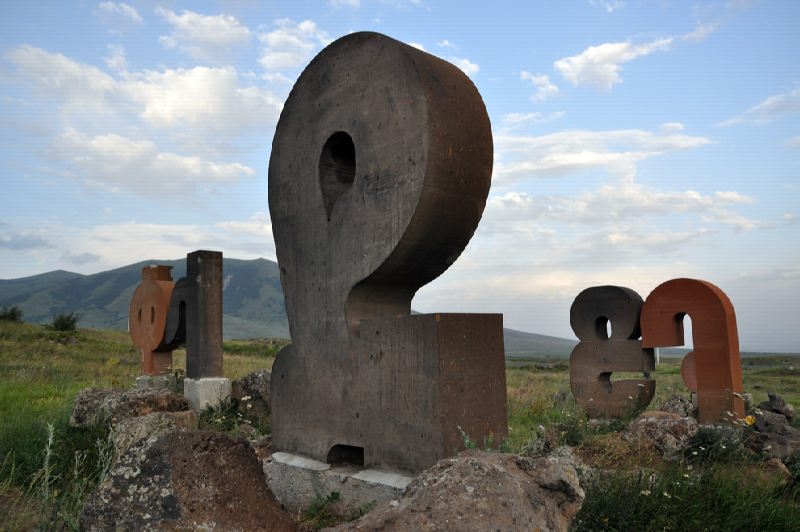 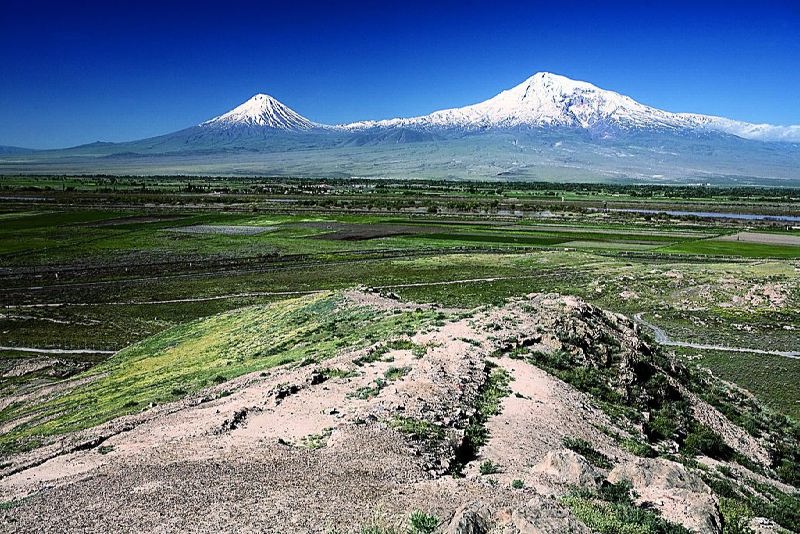 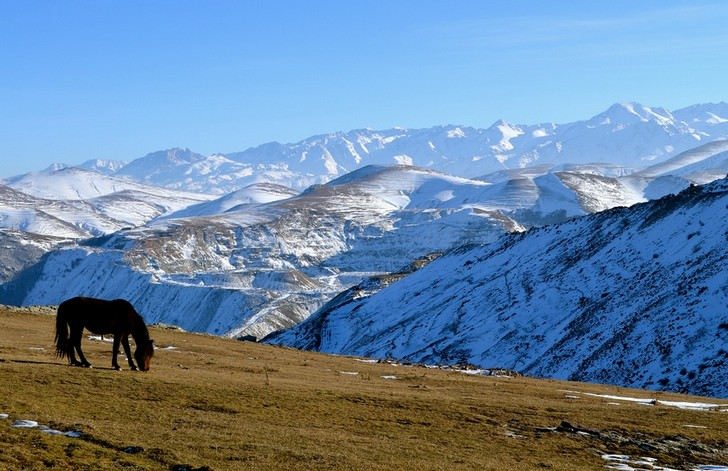 Mountains of the Lesser Caucasus 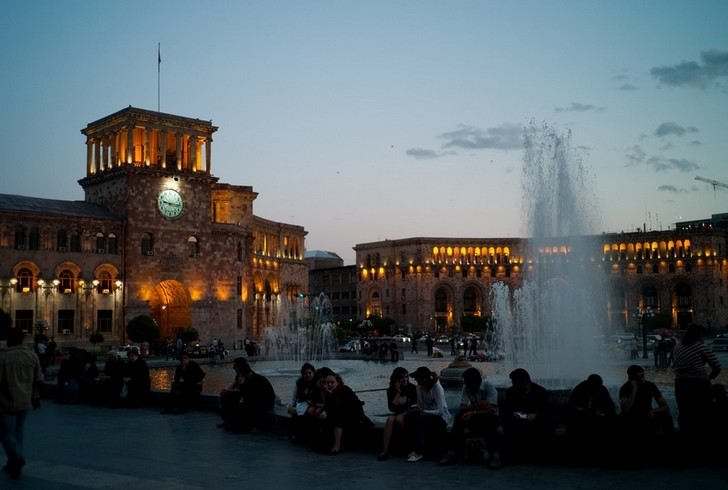 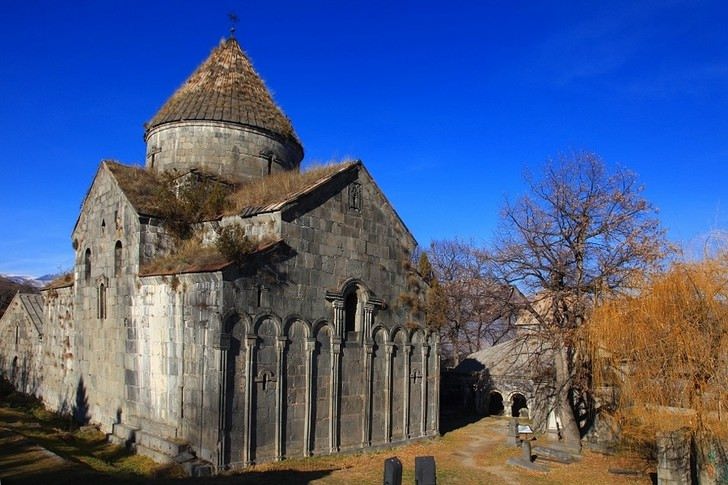 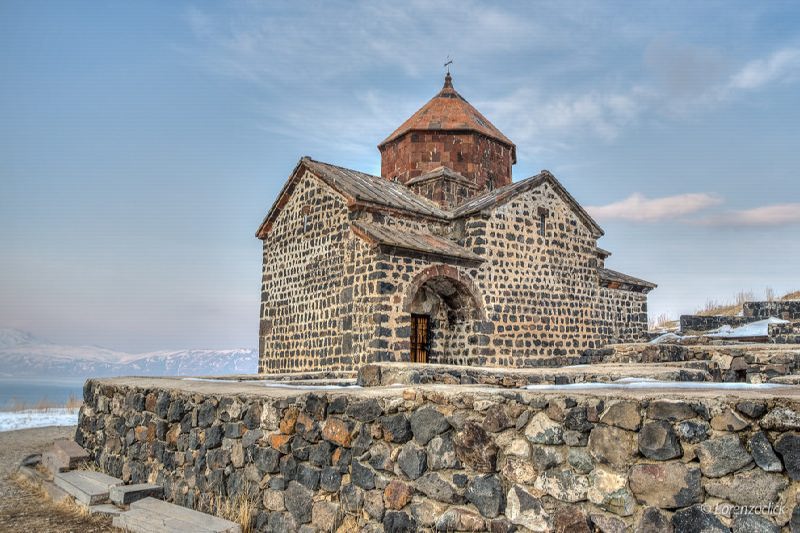 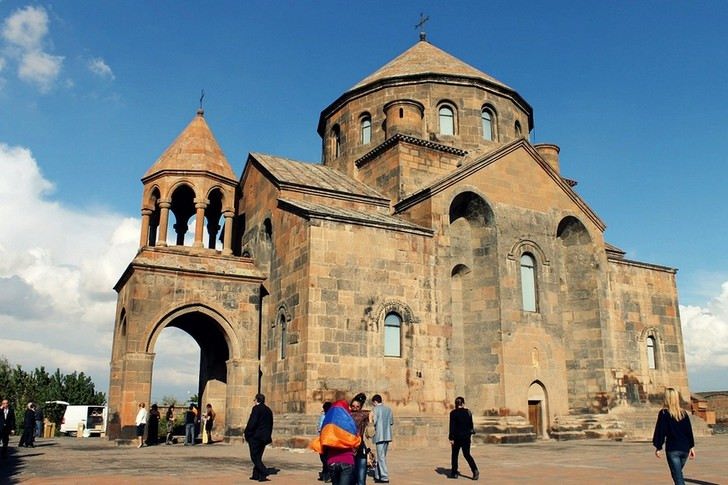 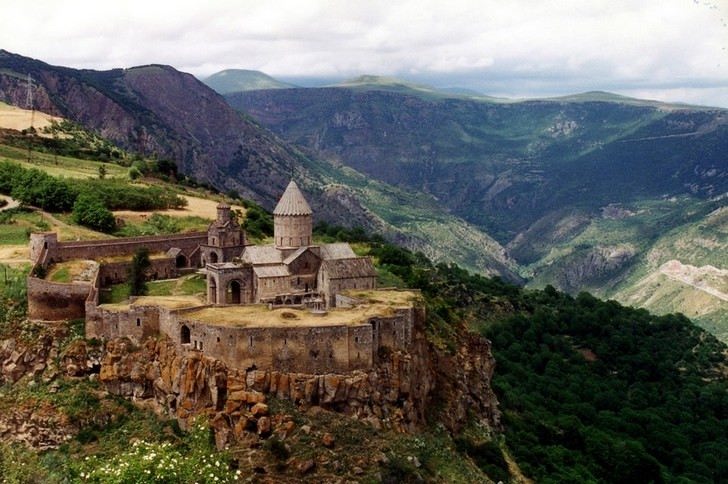 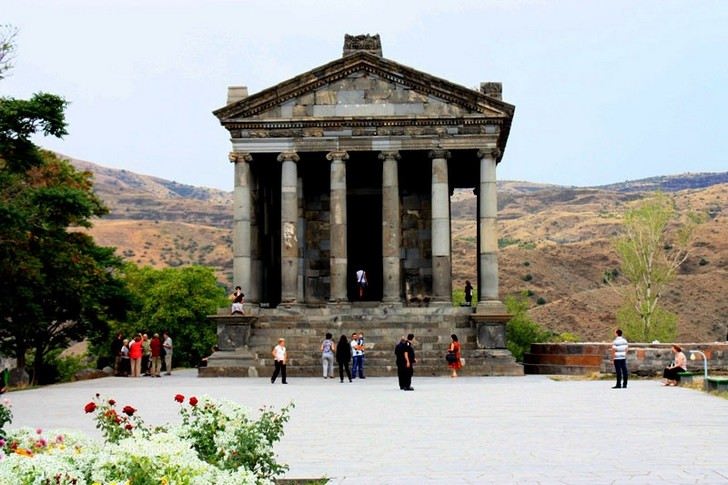 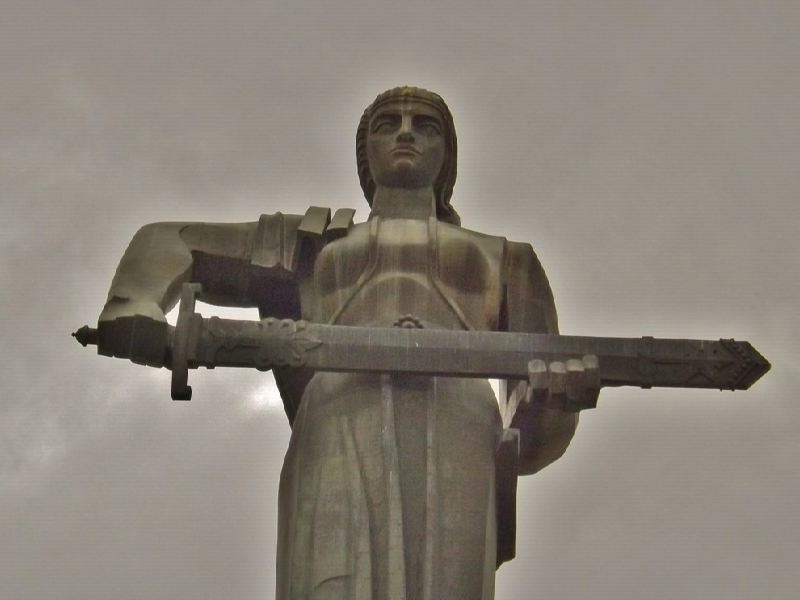 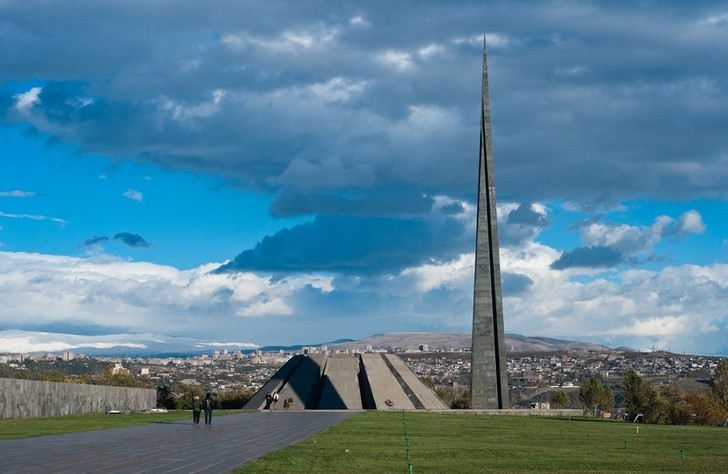 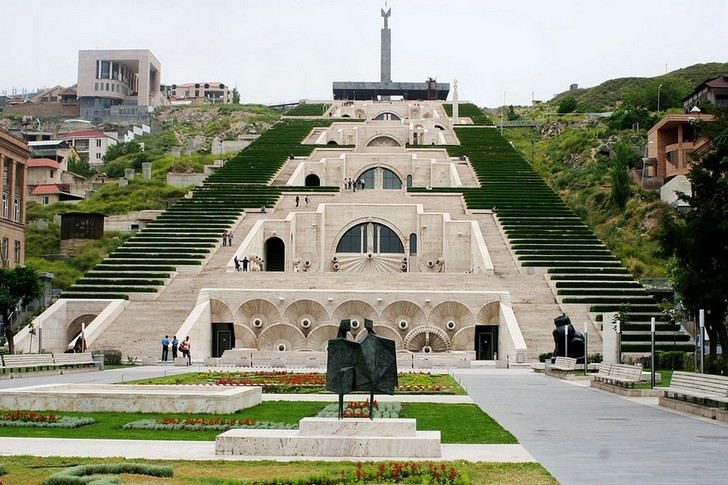 Yerevan is one of the world’s oldest cities 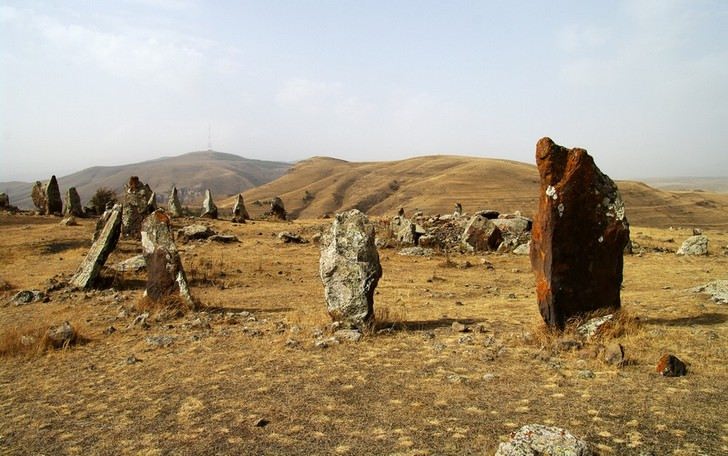