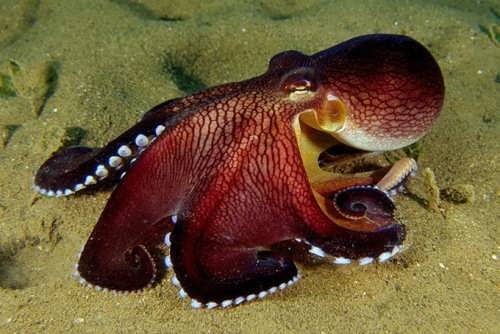 Octopus is a strange undersea creature. It is, without doubt, the Terror of the Deep. It has eight arm-feet, which are just like eight snakes all moving at the same time. And the strength of these arms is almost unnatural.
His eyes are quite different from any sea creature. They are not round but oval, small and full of terrifying expression of cold anger.
There’s no animal in the whole world which can equal the octopus in imitating anything. He can imitate pink, red, purple, blue… and even be striped!
He can do almost everything. He can crawl like a huge spider, on the bottom or over rocks. He can paddle or swim through the water. He can jump backwards like a rocket, faster than the eye can follow him.
In addition to all this, he has an ink sac. When he wants to prepare for an attack, he squirts out a cloud of this blue-black liquid and hides in the rocks. Then he creeps out from an unexpected point ready for a new attack. He is as cunning as a fox.
His body is elastic and can easily change shape.
END_OF_DOCUMENT_TOKEN_TO_BE_REPLACED 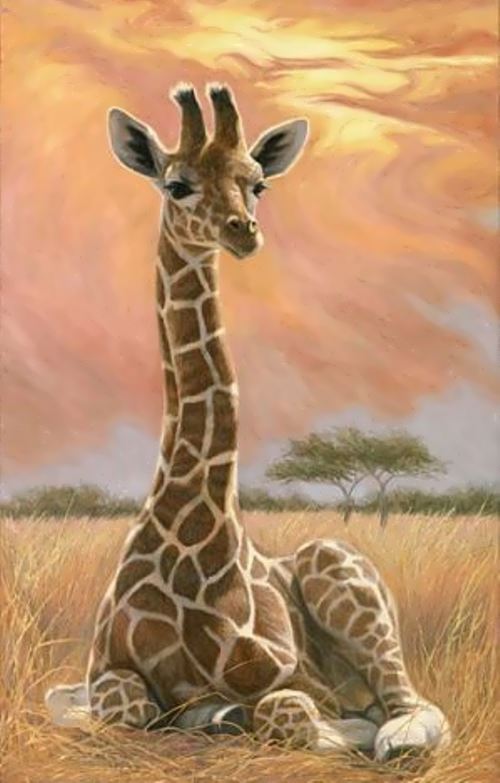 The giraffe is the tallest of all animals. A male giraffe may grow more than 5.5 meters tall — 1.5 meters taller than the African elephant, the second tallest animal. The giraffe’s legs are 1.8 meters long, and its neck may be even longer. But even though giraffes tower over other animals, most adult males weigh only about 1,200 kilograms. A male African elephant may weigh more than 5 times as much.
The scientific name of a giraffe is camelopardalis, from Latin cameleopard (camel + leopard). People in Ancient Rome gave this name to the animal because it was great, like a camel, and spotted like a leopard. Giraffe and camel can do without water for a long time.
The most striking feature of the giraffe is its long neck. It’s amazing, but giraffes and humans have the same number of neck bones. Jean Baptiste de Lamarck, a famous French zoologist, had an interesting theory about it. He believed that at one time the giraffe’s neck had been much shorter, and that it had grown to its unusual length because of the animal’s habit of reaching for the tender leaves in the upper branches of trees. This theory is not held by scientists in general. However, it is true that the giraffe can pick the leaves from the upper branches of the mimosa and acacia trees which it likes so much.
END_OF_DOCUMENT_TOKEN_TO_BE_REPLACED 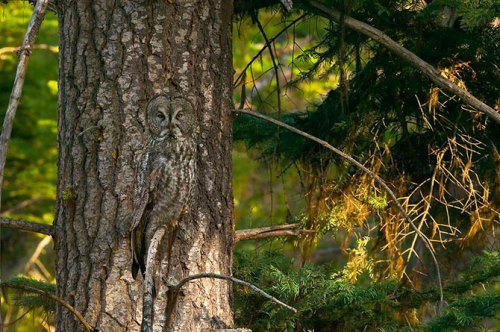 Art Wolfe, the famous wildlife photographer, has been traveling through the mountains, forests and deserts for more than 35 years.
Like no one else he can show the beauty of the wildlife, wild animals and all the colors of our environment.
In these photos there are animals that are able to become invisible. The project is called Vanishing Act. How did the author manage to see them? Some animals are masters of camouflage. This ability is called mimicry (similarity of one species to another which protects one or both).
How many seconds or minutes do you need to find the animal?
It’s a real idyllic world of plants and animals! By the way, the author began work on his masterpiece in 1989, and showed a series of photos in 2005. Only 16 years later!
Art says that the main purpose of his work is to support and develop the idea of perfect beauty of the Earth.
END_OF_DOCUMENT_TOKEN_TO_BE_REPLACED