« Wonderful Giraffes
What is Beauty? » 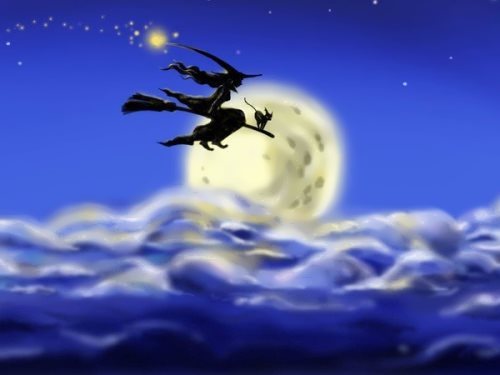 From earliest times, people in all parts of the world have believed in witches. Originally, a witch was either a man or a woman who had magic powers. Through the years, however, only women came to be considered witches.
People once blamed witches for any unexplained misfortune, such as a sudden death or illness, or a crop loss.
They also thought that witches could raise storms and turn people into beasts. The legendary Circe, for example, turned Odysseus’s friends into pigs.
Witches, it was believed, worked with the devil and did everything they could to please him. Their job was to do harm and to bring bad luck. But they could help people too. For example, a person in love could ask a witch for a love potion.

How old is witchcraft?
Some scholars regard witchcraft as an extremely old system of organized religious worship and trace it back to pre-Christian times. The early Church Fathers thought that witchcraft was a delusion and strongly disapproved of it. In the following centuries, however, belief in witchcraft spread. Even today, according to some scholars, more than half the people in the world think that witches can influence their lives.

Trials and executions
In the 1400s, public ‘trials’ and executions of witches began in Europe. We will never know how many innocent people, mostly old women, died for the sake of this terrible superstition. Witches were hanged and burnt alive.
In 1431, Joan of Arc, the French national heroine, was found guilty of witchcraft and heresy, and was burnt at the stake.
From 1484 to 1782, according to some historians, the Christian church put to death about 300,000 women for practising witchcraft. Many of these women suffered such terrible torture that they confessed to being witches simply to avoid further torment.

Detecting a witch
There were several ways of finding out whether a woman was a witch or not. A mole, a scar or another mark on the woman’s body where a pin could be stuck without causing pain were considered to be the devil’s marks (places where the devil had touched the guilty woman). Devil’s marks also included birthmarks.
In another test, people tied the suspected woman’s arms and legs and threw her into deep water. If she floated, she was considered guilty of being a witch. If she sank, she was innocent (but probably died by drowning).
There were other popular methods, too. One was to make the suspect say the Lord’s Prayer. If she made a mistake, she was immediately found guilty. A second way was to command her to weep.
A woman who did not shed tears was certainly a witch.
Yet another test was to weigh the suspect against the large church Bible.
The unfortunate woman was declared a witch if the weight of the Bible was more than her own. 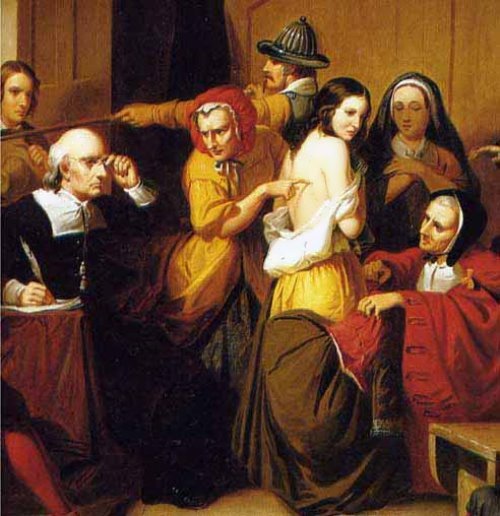 Witch-finders
During the 1600s and 1700s, an almost hysterical fear of witchcraft swept over Europe. Thousands of women were tried and executed as witches. The courts allowed gossip and rumour to be used as evidence. Many children testified against their own parents.
There were special people called witch-finders whose job was to search for witches.
The most famous of these witch-finders was Matthew Hopkins, who became the first ‘Witch Finder General’ in England.
This became his life-work. He travelled around the countryside, discover as many he could. He stopped in many towns and villages along the way and was paid a fee for his services.
Matthew Hopkins was an expert in detecting witches. Even an insect-bite would convince him that a woman was a witch. But his favourite method was the witch-ducking or ‘swimming’. They say Matthew Hopkins himself died from a ‘swimming’ in the local pond. 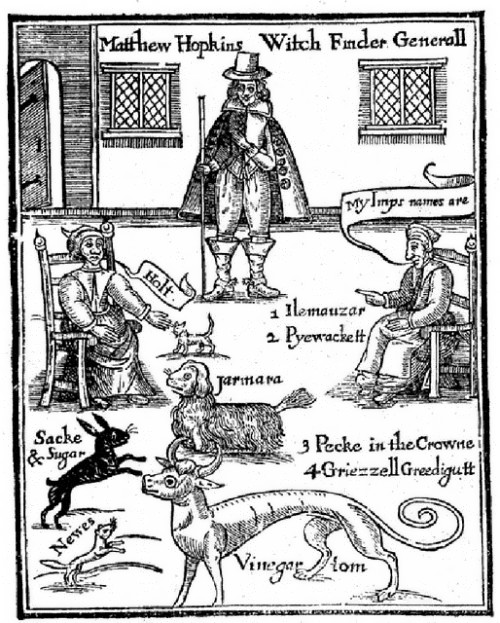 A change for the better
In the 18th century it all came to an end. In 1736, a new law was made in England to replace the Witchcraft Act that James I had brought in, nearly two hundred years earlier. It said that witches could no longer be punished by death. A person suspected of witchcraft was to be kept in prison for a year and put in the stocks every three months. The stocks were made of wood. They were used to lock a guilty woman’s arms and legs so that she could not move.

Witchcraft today
In the mid-1900s, a new interest in witchcraft occurred in Europe and the United States. As a result, witchcraft as an organized religion has attracted large numbers of believers. These people meet regularly in local covens (usually in groups of 13 members). Witchcraft festivals called Witches’ Sabbaths take place four times a year, one in each season. The most important festival falls on October 31.
Books, films and television shows have done much to lessen the fear of witches and witchcraft. Today, many, witches are portrayed attractive, slightly unusual women whose supernatural activities do harm to no one.

Witches’ Sabbaths usually take place in a dark and lonely place. It may be a ruined castle, a wood, or a crossroads…
It is the dead of night and the moon casts an eerie light over the castle and the gnarled trees around it. Witches and other ‘guests’ are riding on brooms or on the backs of animals…
Soon the witches’ master will appear. Here is a high throne for him. Then the celebration begins. A fire is lit, the huge cauldron is set up and a feast is prepared for the whole gathering. Music and dancing go on into the night until the cock crows the next morning.
From Speak Out 4-5, 1999 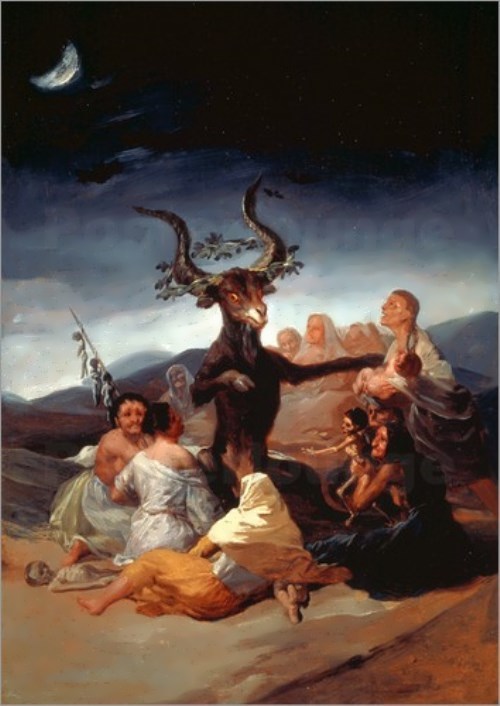 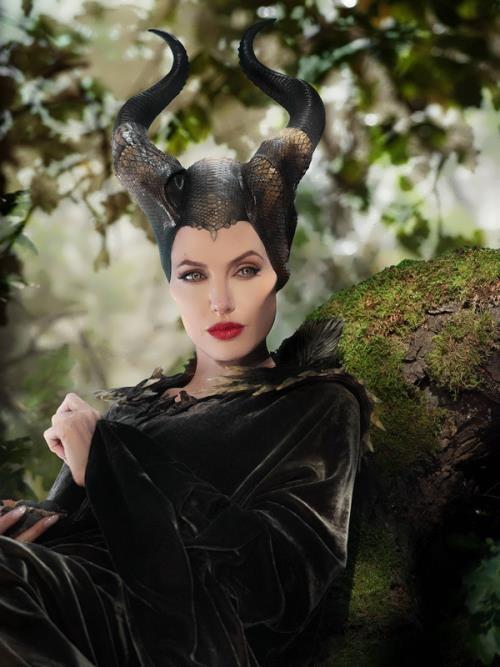 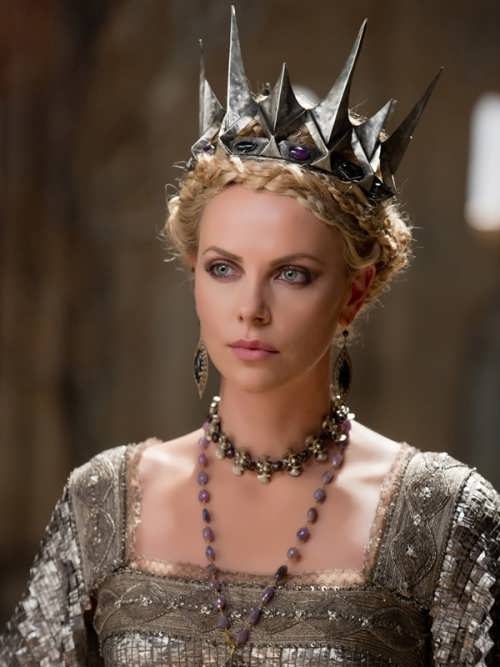 Charlize Theron in Snow White and the Huntsman