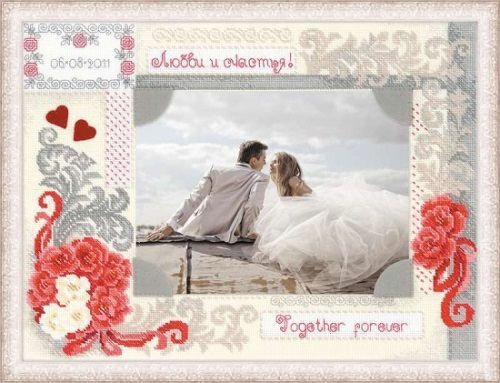 Corals, formed from small calcareous skeletons of polyps, form whole coral reefs. So does the union of two loving hearts. Formed from a thousand days spent together, filled with mutual feelings and important events, an entire island, called a family.
Red corals symbolize health and a long life together. Traditionally, red corals, linen tablecloths, bedspreads, towels and other products made of linen are the best gifts for tirty-fifth wedding anniversary. In addition, the wife gives her husband a shirt. Now not only romance and love keep the marriage union – it is mutual respect, care and gratitude for the years spent together.
Some will find it strange that after this wedding anniversary there may still be some tender feelings. However, after crossing this line, the spouses begin to realize how deep their love is. In addition, the experience of family life proves the correctness of the choice that they made many years ago, in their youth.

In Russia, they called this wedding anniversary – a linen wedding. It received this name because the ancestors compared the years lived together with the canvas, although woven of a lot of fine threads, but very durable. The lived years stretched before the jubilees like a fabric, on which are visible all-all patterns, symbolizing the events of the past. 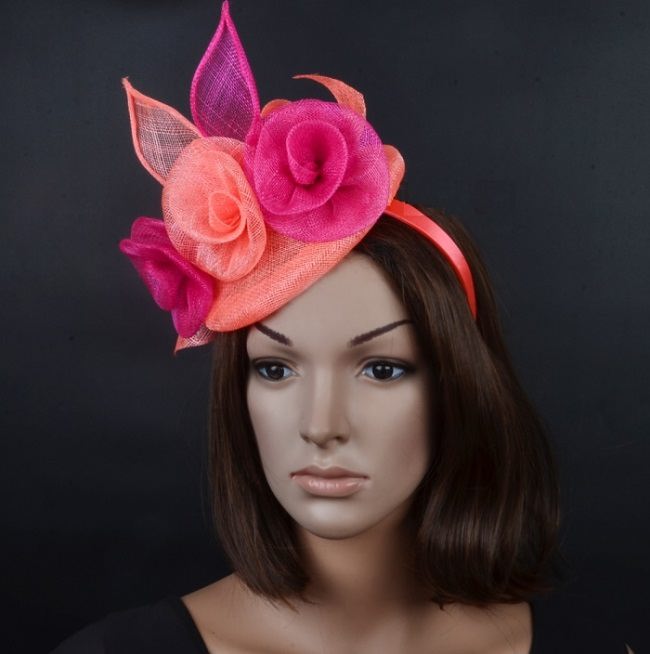 A hat for a coral wedding

The traditions of coral weddings are associated with the water element. Earlier on this day, the couple went to the nearest pond to give him a scarf of red (coral) color, as a symbol that they accept the wisdom of nature.
If the weather is good outside, a celebration took place in open air, close to a river or water body.
The table setting, in particular on 35th anniversary should be coral color, coral-colored napkins, tablecloth or simply decorative elements – candles, frames, etc. Also, as a color scheme for the holiday, you can choose the sea shades – blue and urquoise. Besides, appropriate will be sea shells and branches of coral as a table docoration.

If you decide to celebrate a coral wedding at home, bear in mind that traditionally on the table should be seafood and fish, and as beverages – mostly red, aged wine, symbolizing the strength of marriage and relationship.
According to an ancient custom, a coral wedding is a time of transferring worldly wisdom to the younger generation. Therefore, on this day, the couple must write notes with the secrets of family happiness and, putting them in a casket, hand them to their grandchildren. And grandchildren should open this casket only at their own wedding.
Since in Russia this anniversary was called a linen wedding, then there was such an interesting custom as making a “linen of life”. On the day of this wedding anniversary, the wife and husband in 4 hands had to weave a piece of cloth. The quality of the woven fabric showed – the same how the couple worked in duo, so they lived these years. If there are nodules and uneven interlacing, then there are some grievances. Accordingly, a husband or a wife should apologize to each other.

What to present for a coral wedding? 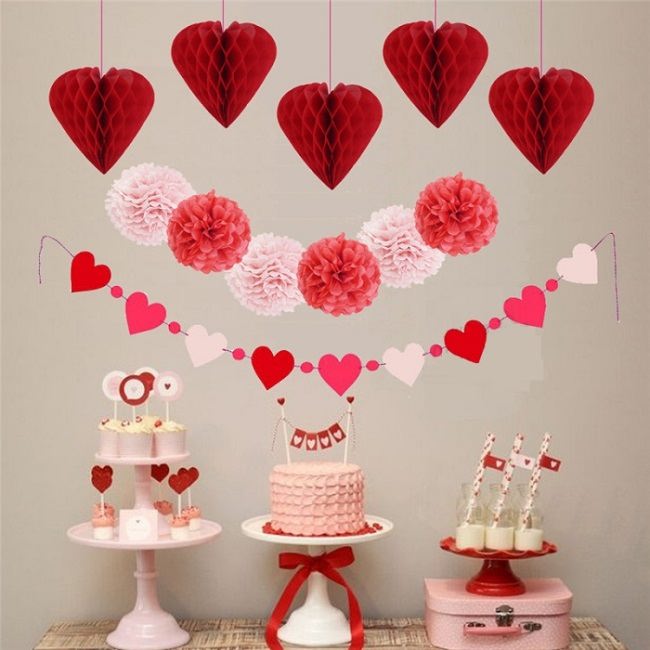 First of all, for this wedding anniversary the spouses themselves give gifts to each other, and then they accept gifts from relatives and friends. As gifts, the wife can make products from coral, for example, coral beads, bracelet, etc. A wife can give her husband a real twig of coral, which they will put in their bedroom as a guardian of their happiness and love
Coral is an unusual color, not red and not orange, but possessing an amazing shade. This pink-orange color, after seeing which, you will never forget it. In addition, the coral color has at least twelve varieties: from gently pink to rich burgundy-orange.
Noteworthy, Coral color is one of the most revered shades in the ancient world. For example, the Sumerians believed that this color brings happiness. The Egyptians considered it a symbol of immortality. And the ancient Greeks took a coral shade thing on the journey as a guard against the vicissitudes of the path and protection from evil. Later in Europe coral color was simultaneously a symbol of modesty.
Undoubtedly, this color speaks for itself! This is an amazingly feminine and attractive color. It energizes and optimizes, not giving a bad mood a single chance! Associated with summer and warmth, this color is able to create a summer mood at any time of the year! Wedding in coral color – eternal summer in your mood! 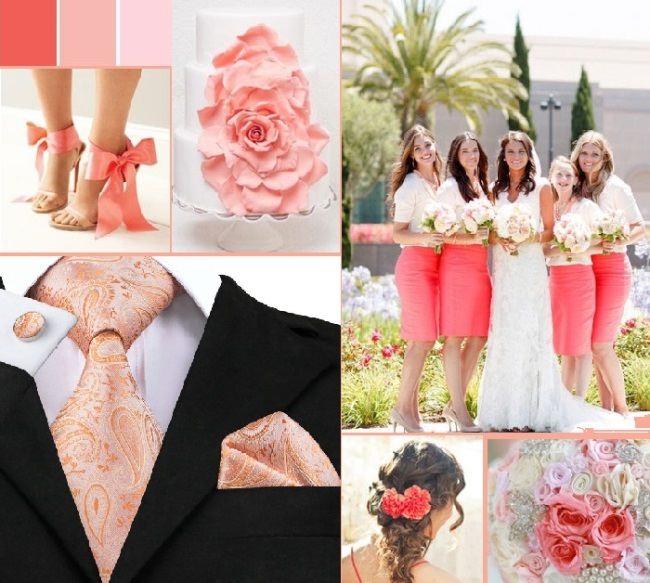 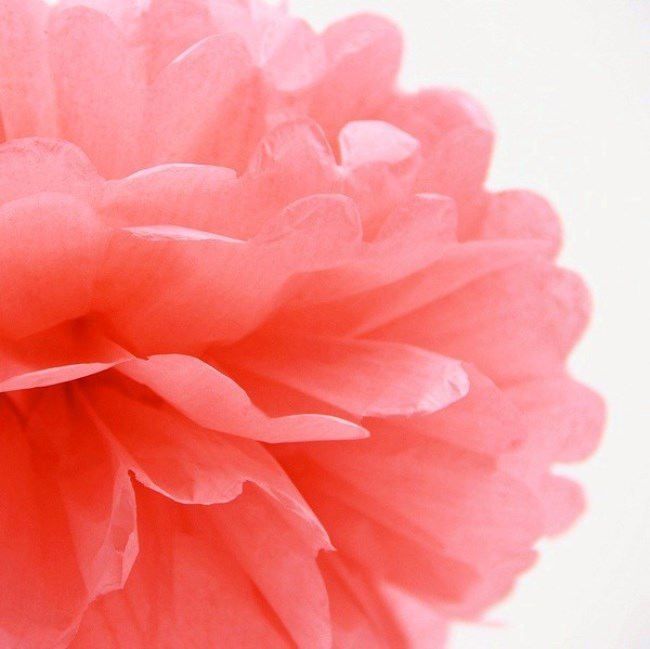 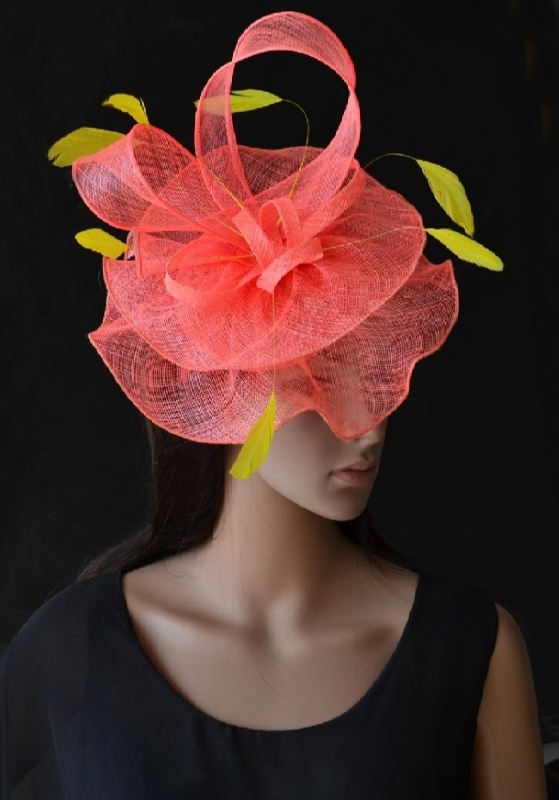 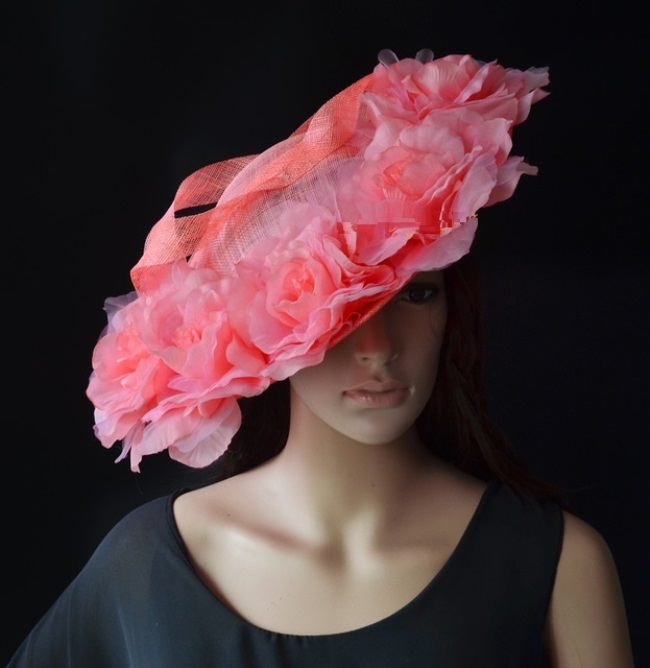 Idea for a coral hat 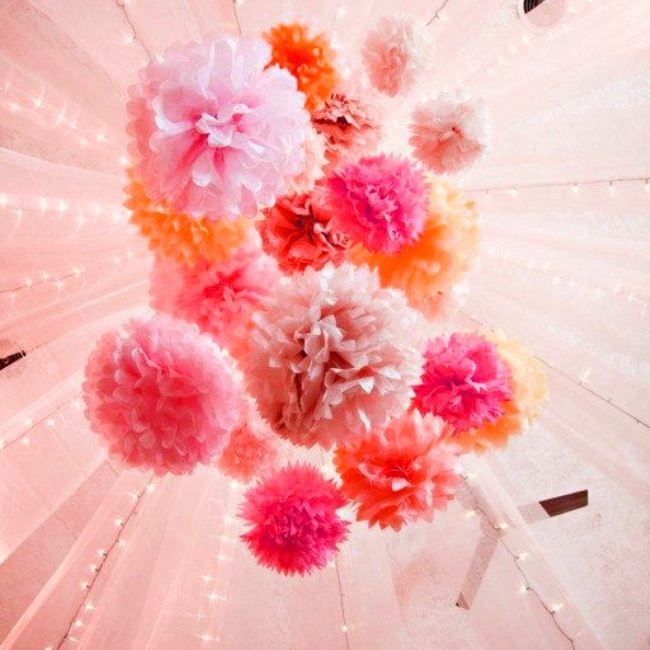 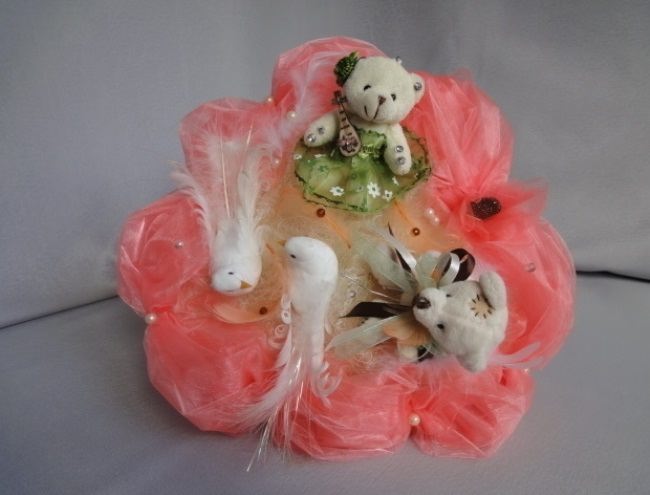 Made of toys bouquet 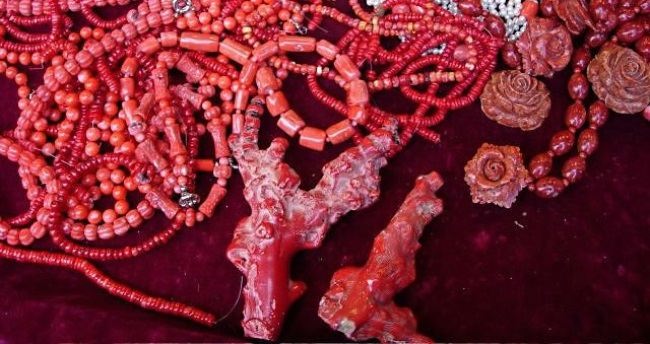 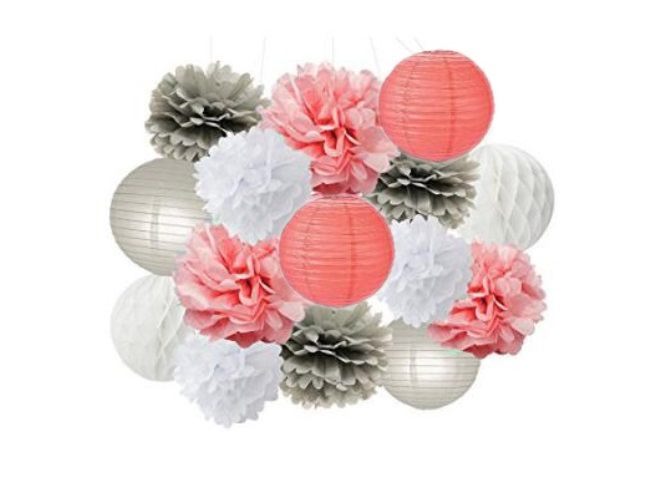 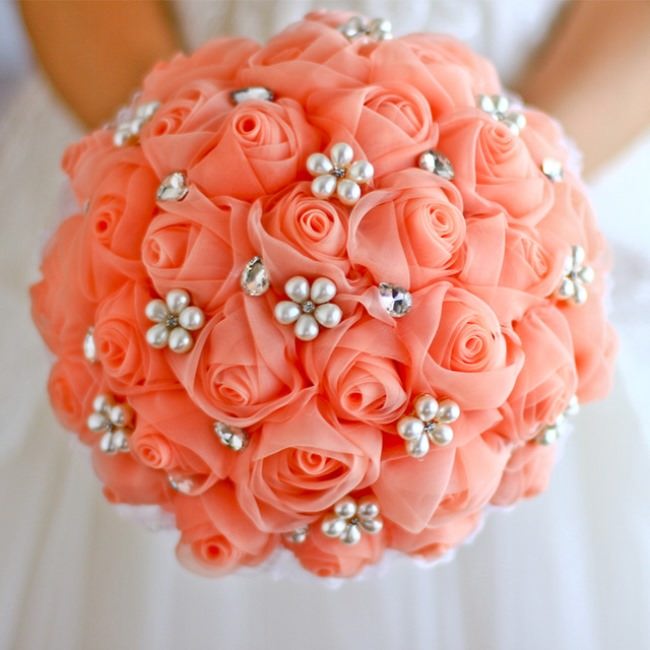 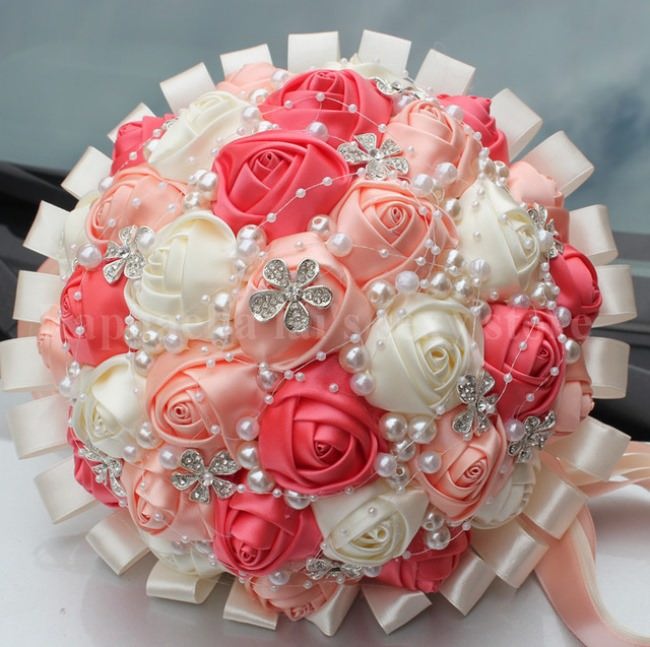 Pink and coral handmade bouquet for a bride 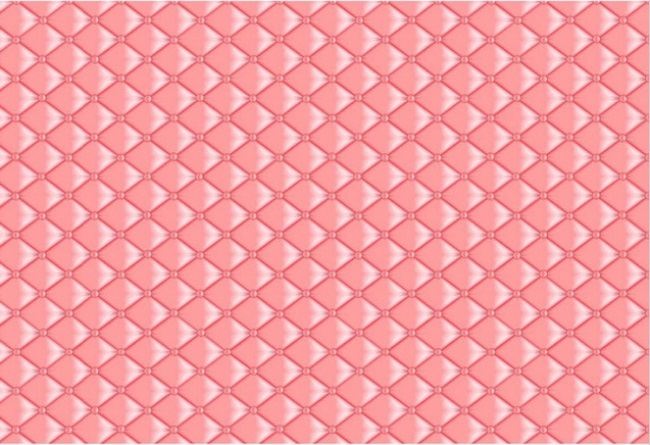 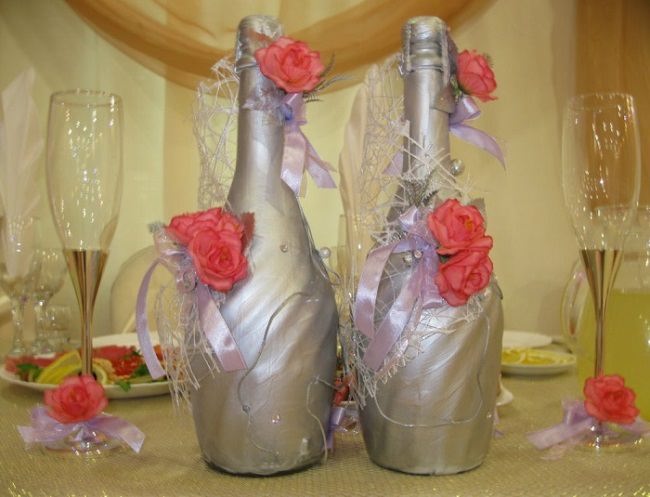