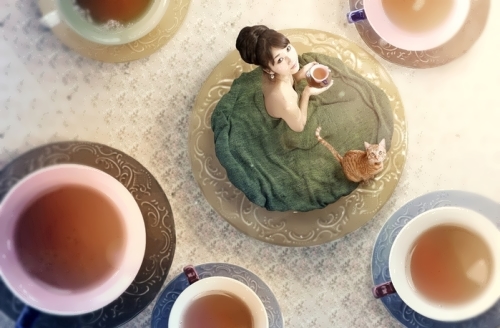 Tea is said to be the most common drink in the world, with production exceeding two million tons per year worldwide.
Tea is a strong and energizing drink. It is made by soaking the leaves of the tea plant in hot water.
Tea was first drunk many centuries ago by the Chinese. The story goes that some leaves from a tea bush fell by chance into the boiling water in a philosopher’s pot. In the past, tea was affordable only by the rich, because of the high cost of importing it. Wealthy households would lock it securely away in sturdy tea chests to prevent theft.
Tea is thought to be native to China and/or Tibet, but not to India or Sri Lanka, where most commercial tea is grown today.
Commercial teas are generally of two forms—black or green—with black by far the more common. 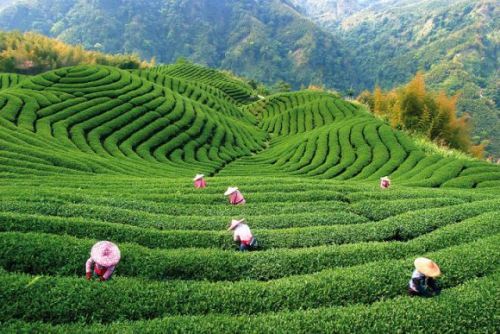 There is an almost bewildering variety of teas available nowadays, both in loose leaf and bag form. Teas from India tend to be strong and dark, while those from China are more delicate and lighter. Earl Grey is pale with a gentle perfume and considered by many to be the most sophisticated cup.
At first tea was used as a medicinal drink, but eventually it became popular to drink anytime.
Americans often drink tea with or after meals, adding milk, sugar, or lemon, while in Great Britain, it has long been practice to serve tea in the late afternoon, often accompanied by cakes or biscuits.
The different kinds of tea are made in different ways. To make black tea, the freshly picked leaves are dried, rolled, and strained. They are then fermented. Fermenting is a way of making the flavor more intense. Finally, the leaves are dried with hot air. This is how the tea becomes black. Unlike black tea, green tea is not fermented. The leaves are just rolled and dried, so they remain green. Oolong is made like black tea. It is sometimes scented with flowers such as jasmine.
In thinking about tea, students of United States history recall the Boston Tea Party of 1773. In this uprising, the tea cargo on three British ships was thrown into Boston Harbor by small group of colonists disguised as Native Americans to protest a tax levied by Britain’s King George III. The resulting closing of Boston Harbor by the British can be interpreted as but one of the many events of history leading to the writing of the Declaration of Independence.

Interesting facts about tea
– Tea bush can grow over a hundred years.
– Tea played an important role at weddings in China. Tea is a symbol of eternal love.
– Tea with lemon was invented in Russia.
– Tea helps to get rid of tooth decay.
– Tea with milk is the best way to cope with alcohol poisoning or incorrect action of therapeutic drugs.
– Tea contains much more caffeine than the coffee.
– Some people are so fond of tea that use it not only as a drink, but even eat it.
– Thomas Sullivan invented the tea bag.
– Until the 18th century, everyone thought that green and black teas are made from entirely different plants.
– The largest tea bush reached 30 meters in height.
– The first iced tea appeared in 1904. 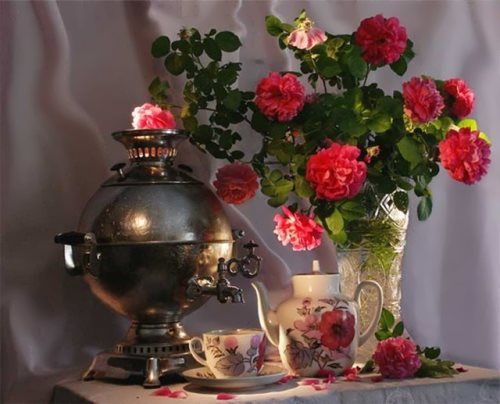 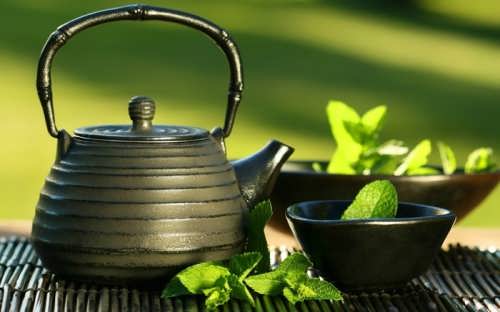 International Tea Day is on December 15 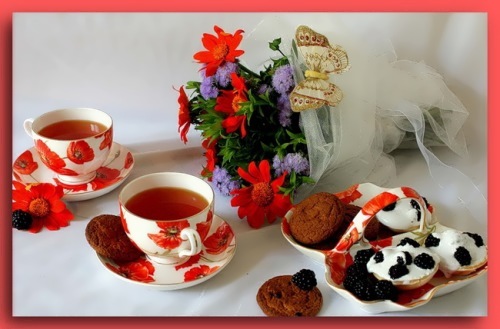 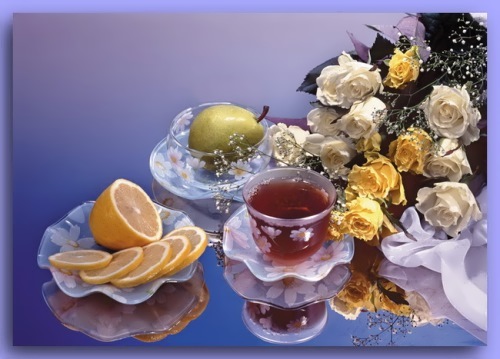 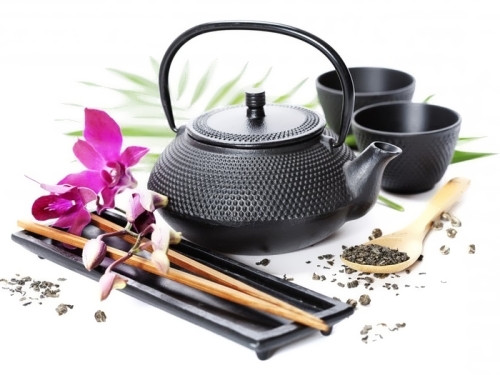 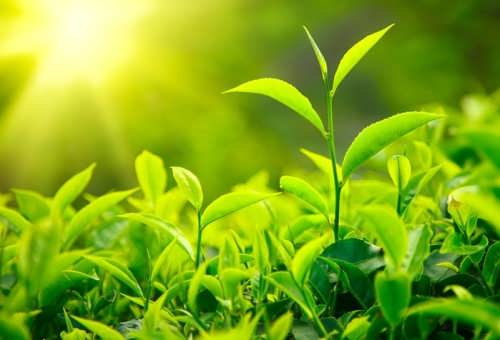 Green tea fields pink landscape
Unique for urban residents, endless green and pink landscape is nothing else but the tea plantations on the slopes of the hills with planted at a certain distance cherry trees. Meanwhile, cherry trees are not for decoration of green fields with bright pink flowers, but to prevent soil erosion and provide shade for delicate tea plants. In fact, the tea industry is one of the most lucrative businesses in China and in the whole world. And the green tea growing in the shade of pink trees – “Yunnan Green” is one of the best teas. Besides, such stunningly beautiful hills are in many rural areas of China.

It is basically a mountainous area with a temperate climate all year round, contributing to the cultivation of tea and lush greenery as shown here. Land of Yunnan province is rich in minerals and substances, such as zinc, lead, tin and more rare minerals, such as thallium, and crocidolite. Extraordinary photos show the rich pink trees in full bloom in Nanjian Yi Autonomous County, near the town of Dali in Yunnan province. Yunnan, located in the southwest of China, borders Burma, Laos and Vietnam. It is one of the least industrialized regions of the country.
source of images: www.dailymail.co.uk, vk.com/public108789167 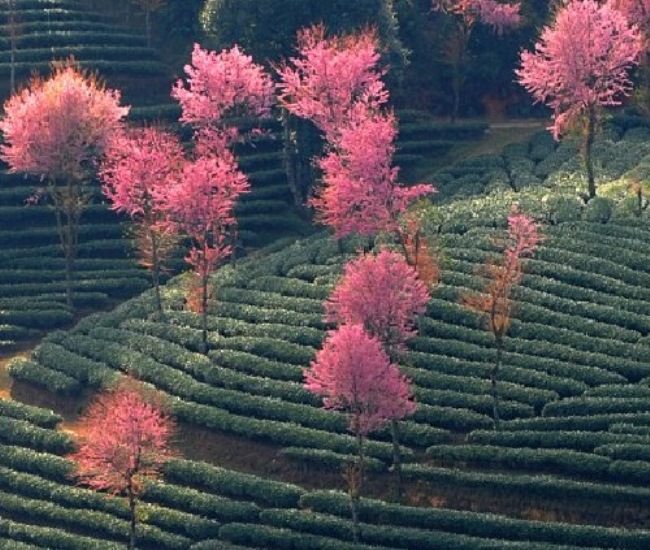 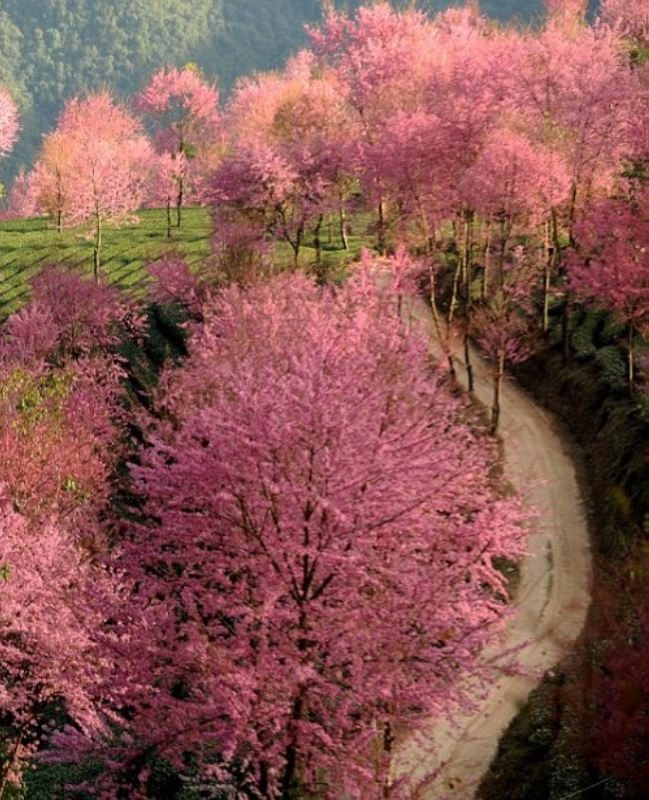 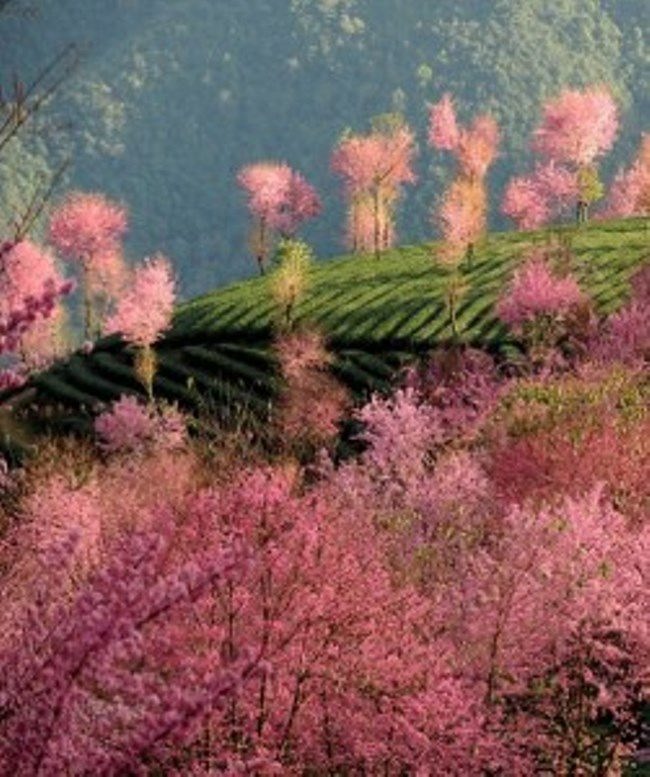