« Tornadoes most violent storms
Land of mountains, lochs and legends » 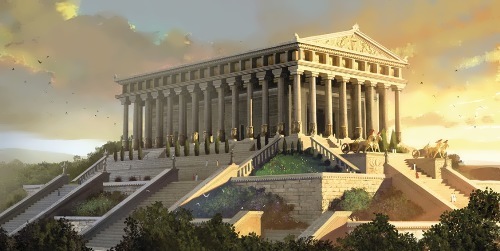 According to legend, the founders of the famous city of Ephesus were the Amazons, a race of women warriors. In the 6th century BC, Ephesus reached its heyday and became an important trading and banking centre of Asia Minor. The Ephesians wanted the world to know about their wealth and decided to win fame by building a magnificent temple to Artemis, goddess of wild nature and hunting. She was the city’s protectress.
All the great cities of Asia Minor took part in the construction of the Temple of Artemis at Ephesus. Croesus, a fabulously rich king of Lydia, also contributed to the building fund. He presented marble columns to the temple.
Temples played an important role in the life of the ancient Greeks. They were not only sanctuaries, but also served as archives and treasuries, where the state money and the most valuable things of art were kept.

The temple of Artemis was designed by the Greek architect Chersiphron and his son, Metagenes. As earthquakes were very frequent in Asia Minor, it was decided to build the temple in a swampy place. They made a thick foundation which could not be destroyed by the shocks of earthquake. It took 120 years to errect this wonderful temple (it was completed in about 550 BC).
Made of limestone and marble, it was one of the largest and most complicated structures built in ancient times. Its foundation was rectangular in form and measured 115 by 55 metres. Marble steps led to the high terrace with 127 columns which had Ionic capitals with carved circular sides. The columns were about 12 metres high.
The temple was famous not only for its great size but also for the magnificent works of art that adorned it. The building was decorated with beautiful bronze statues sculptured by the most skilled artists of the time. Antipater, a Greek poet, wrote: “But when I saw the sacred house of Artemis that towers to the clouds, the other Wonders were placed in the shade, for the Sun himself has never looked upon its equal outside Olympus.”
On the night of 21 July 356 BC, a man named Herostratus destroyed the Temple of Artemis, one of the seven wonders of the ancient world. He wanted to immortalize his name by burning to the ground one of the most beautiful structures on earth. Indeed, the name Herostratus has lived through centuries, but his fame is evil. 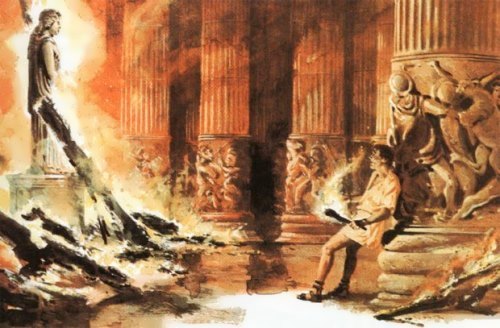 It might seem strange, but on the night when the temple was burnt down, Alexander the Great was born. The Roman historian Plutarch later wrote that the goddess was “too busy taking care of the birth of Alexander to send help to her threatened temple.” Some years later, in 334 ВС, Alexander visited Ephesus. Не wanted to sponsor the reconstruction of the temple. As legend has it, the Ephesians didn’t accept his help. They told him that they worspipped him as one of the gods and a god couldn’t errect a temple to a goddess.
The citizens of Ephesus and other Ionic cities collected money to rebuild the temple. Hundreds and hundreds of people came to Ephesus with gifts to do homage to Artemis. The new temple was decorated with golden pillars, silver statuettes, and paintings. Recent archaeological excavations at the site revealed gifts from pilgrims including statuettes of Artemis made of gold and ivory, as well as earrings, bracelets, and necklaces.
The fortune, however, didn’t favour the second temple. It was burned down by the Goths in 262 AD.
Ephesus was later deserted, and only in the late nineteenth century excavations started on the site. Archaeologists uncovered the foundation and some parts of the second temple. Of course, the early descriptions of the temple can give us an idea about the general plan of the building. However, its true beauty lies in the architectural and artistic details which, unfortunately, will remain unknown.
Now fragments of the columns and sculptures from the second temple can be seen in the British Museum in London. 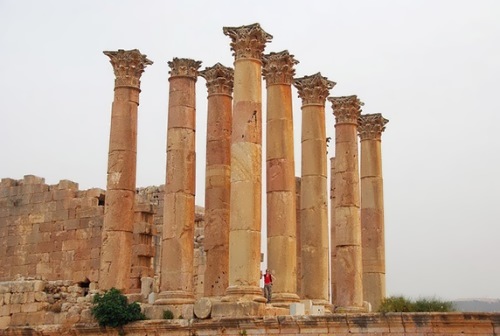