John Logie Baird (1888-1946) applied for a patent for a mechanical television in 1923.
He ran successful experiments in transmitting images in 1926, and in 1930 he worked with the British Broadcasting Corporation (BBC) to begin mechanical television broadcasting. He also tried, rather unsuccessfully, to mass-market his television transmitter.
In 1923 Vladimir Zworykin (1889-1982) also applied for a patent. His was for a television camera that converted optical images into electrical pulses. On November 18, 1929, at a convention of radio engineers, Zworykin demonstrated a television receiver containing his ‘kinescope,’ a cathoderay tube. That same year Zworykin joined the Radio Corporation of America (RCA) in Camden, New Jersey. As the director of their Electronic Research Laboratory, he was able to critical improvements to his system. Zworykin’s ‘storage principle’ is the basis of modem TV.

Meanwhile, in Japan, Kenjiro Takayanagi was developing electronic television, too. He was ahead of Zworykin, but better publicity gave Zworykin the nickname “father of television.” Takayanagi transmitted an image electronically in 1926, with a 40-line resolution and film running at 14 frames per second.
In 1932 the BBC ventured the first regularly broadcast pro-grams using Baird’s mechanical equipment, though it had been broadcasting special events and other sporadic transmissions since 1927. The first special-purpose television station was built in Germany in 1935 in preparation for the Berlin Olympic Games the following year. That Olympic year, NBC experimented with electronic broadcast from the top of the Empire State Building. The first live journalistic event covered by television was the 1937 coronation of Britain’s King George VI. That year, the BBC began the first regular, high-quality broadcasting service using an electronic system. 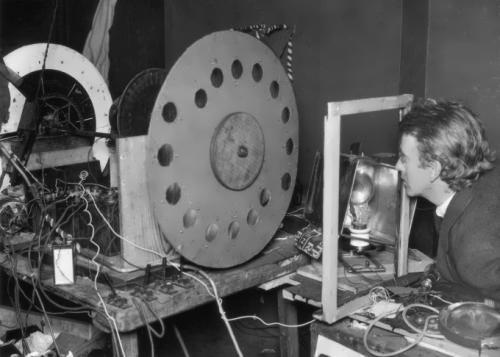 The first television, created in 1925 by the Scottish inventor John Baird Logue

The onset of color television
In 1940, Peter Carl Gold-mark, an engineer for Columbia Broadcasting System, demonstrated a color television sys-tem that used a rotating three- color disk. Goldmark thus proved the practicability of color television, although his system was later replaced by an all-electronic color television that was compatible with black-and-white transmission.
In spite of all these successes, television did not come into its own as a medium until 1948. Since then, television has had a tremendous influence on industrialized societies. As a source of news and entertainment, it is the centerpiece of the expanding market of consumer electronics. 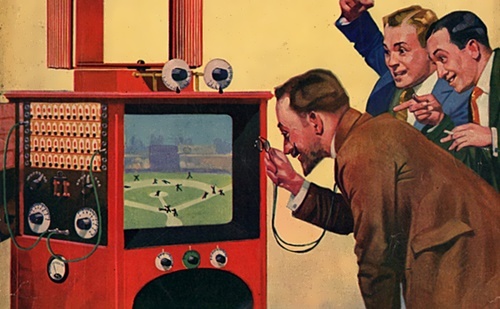 Movie milestones
– The first practical motion-picture camera was invented by a French scientist. Etienne Jules Marey, in 1882. His device recorded a sequence of pictures around the edge of a sensitised glass disc. When the pictures were looked at in rapid succession, they created the illusion of movement. The disc meant, however, that only very short sequences could be shown at a time. So in 1887, Marey replaced the discs with rolls of film -a year before roll film was introduced for still pictures in George Eastman’s Kodak camera. In 1893, Marey patented a film projector, enabling his films to be seen on a screen.
– The first commercial showing of a film was in the converted basement of the Grand – Cafe in Paris on December 28. 1895. The films, of everyday life in the French capital were made by the brothers Louis and Auguste Lumiere. Each reel of film lasted about a minute.
– The first motion pictures in color were shown in a London theatre in 1909. But the films showed only two- color pictures, and it was not until 1930 that a full-color film was developed by the American firm Technicolor. The new process was first used in Walt Disney cartoon shorts.
– The first commercial sound-on-film production was Der Brandstifter (The Arsonist), a German film made in 1922. But ‘talkies’ did not supersede silent films until after the release and enormous success in 1927 of The Jazz Singer, starring A Jolson. 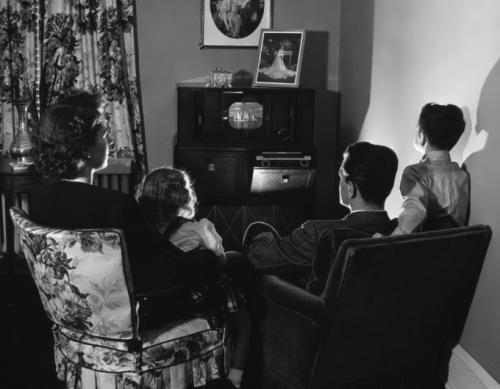 Cinema record holders
– The world’s most prolific film industry is no longer in Hollywood, but in Bombay. In 1979—a boom year for the Indian cinema—714 feature films were produced, each lasting at least an hour. In that same year Japan produced 335 films, France 234, Turkey 195, the Philippines 170, and the United States 167. Only 38 films were made in Britain.
– The world’s most perennially popular author among filmmakers is William Shakespeare. There have been almost 300 film productions of his major plays, with 41 versions of Hamlet alone.
– Sherlock Holmes has been portrayed on screen more often than any other fictional character. Sir Arthur Conan Doyle’s detective has been played by 62 actors in 177 films. The next most portrayed character is Count Dracula, with 133 film appearances, followed by Frankenstein’s monster (91 films). Tarzan (83), Hopalong Cassidy (66) and Zorro (66).
– The longest commercially made talking film seen at one screening is Lawrence of Arabia. It was made by the British director David Lean in 1962 and stars Peter O’Toole. It runs for 3 hours 42 minutes-two minutes longer than Gone With the Wind.
– The longest film ever made was a British underground movie called The Longest Most Meaningless Movie in the World. In its original version, which was premiered at a Paris cinema in October 1970, it ran for 48 hours.
– The world’s most expensive film was War and Peace, made by the Russian director Sergei Bondarchuk between 1963 and 1967. The eight-hour-long film-which is screened over three to four evenings – is reported to have cost more than £65 million. It was shot on 168 different locations—the biggest total for any film—and included a cast of 120.000 extras from the Red Army.
– The first film to be shown to airline passengers in flight was a silent version of Sir Arthur Conan Doyle’s The Lost World. It was screened during an Imperial Airways flight from London in April 1925.
– The most financially disastrous film ever made was United Artists’ Heaven’s Gate, a western. It cost an estimated $40 million and on its opening day in New York and Toronto, in November I 980, it did such poor business that it was withdrawn immediately. The film was re-edited from 219 minutes to 153. and released throughout North America in April I 981 . By the autumn of 1982 it had earned less than 5 percent of its outlay and had caused the downfall of United Artists, sold to MGM for $380 million. At one stage during filming, the director, Michael Cimino, insisted that the set of an entire western town be shifted back 900mm (3ft) – at a cost of $1 million. 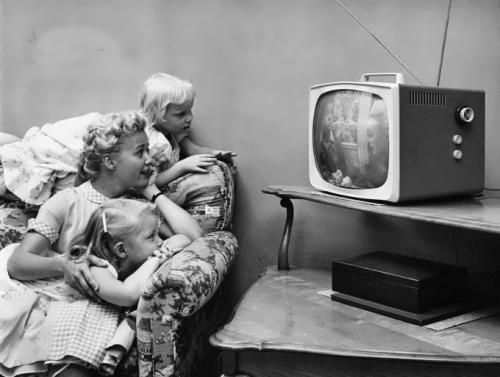 1955 – family is watching television at home

Cool facts
– The word ‘television’, meaning ‘far sight’, is coined by Russian Constantin Perskyi…Farsighted indeed, as the real thing hasn’t even been invented yet. Later generations will dub Perskyi’s television – TV, the telly, the box and the boob tube.
– In 1925 Brit John Baird showcased the world’s first television show- well, a moving silhouette at least.
– In 1929 Philo Farnsworth unveiled an unmissable three and a half inch moving image of his wife…with her eyes shut.
– In 1940 the first TV advert was aired on US TV for an innovative watch company.
– In 1949 a massive break-through came with the invention of color TV.
– In 1965 Smellovision was created. Smells were transmitted through the TV. A man brewed a cup of coffee and hundreds of viewers phoned in to say they smell coffee coming from their TV. Clearly they’re all mad as it’s an April Fool’s joke by the BBC.
– In 1969, 600 million viewers tune in to the first ever broadcast from the moon.
– In 2057, we will be able to step straight into our own virtual reality. 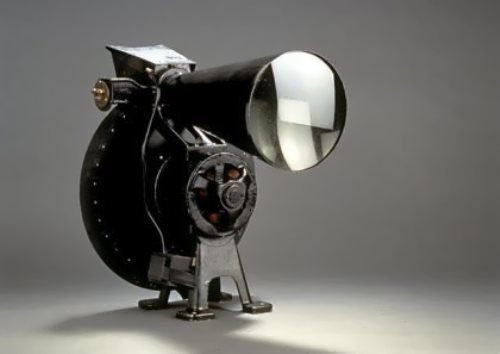 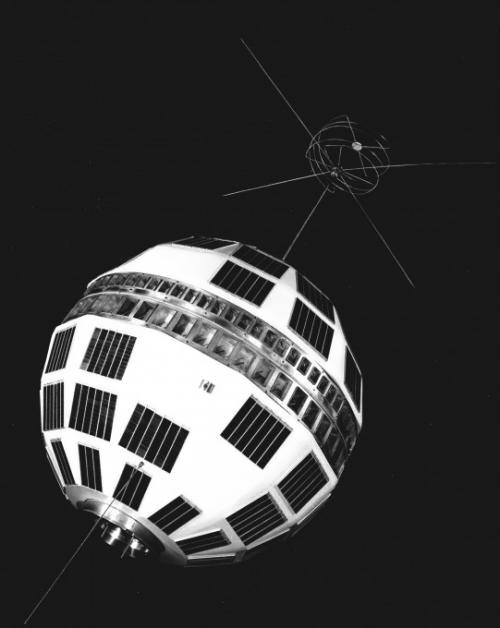 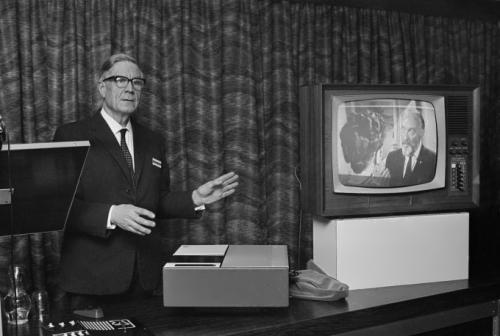 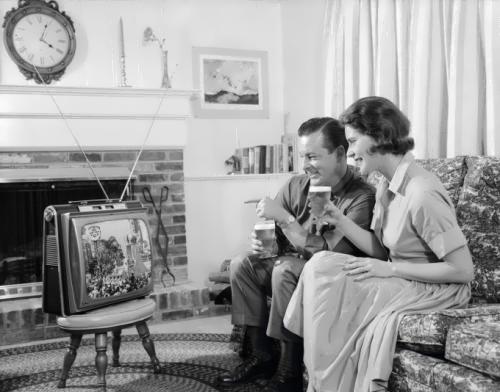 1960, a young couple is watching a portable TV in the living room 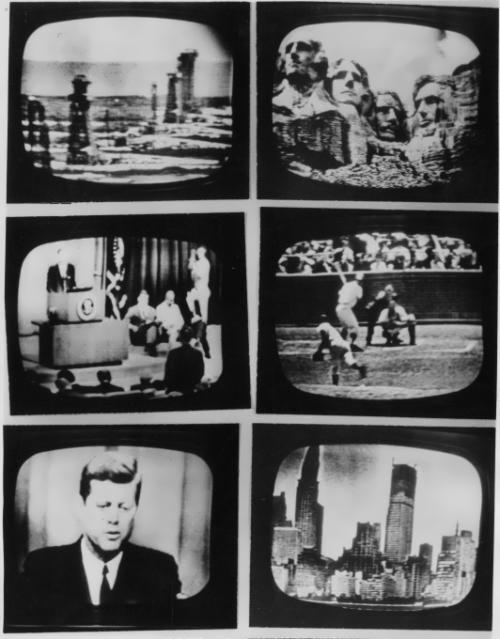 July 23, 1962 – the first simultaneous transmission of six programs via the Telstar satellite 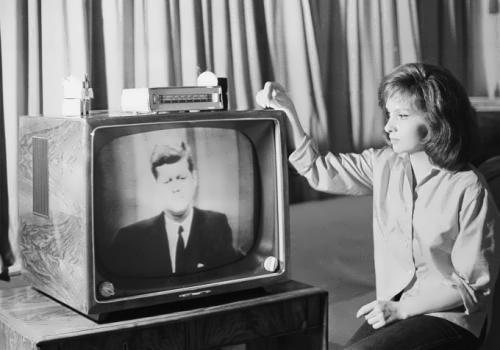 Gina Lollobrigida watches President Kennedy’s speech at her villa in Rome on July 23, 1962 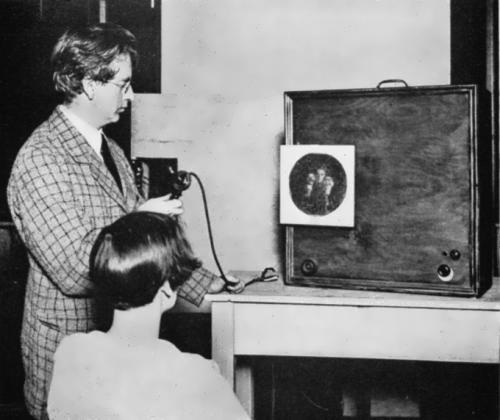