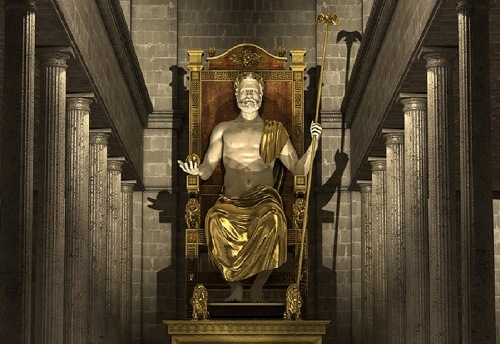 Legendary Olympia… The sacred place of all-knowing and all-seeing Zeus… The place where he defeated Cronus, his father, and then became the king of the gods… The place which gave its name to the Olympic Games…
In about 450 BC, a magnificent temple was built at Olympia. The temple was devoted to Zeus, god of thunder, lightning and rain, and it was to surpass in beauty and grandeur all the other temples existing in Greece at that time. However, for some time it had no proper statue of the king of the gods. That is why the citizens of Olympia decided to invite the Athenian sculptor Pheidias for the sacred task of errecting the statue of Zeus. By that time, Pheidias had already made two magnificent statues of the goddess Athena in Athens and developed a technique to build enormous gold and ivory statues.

When Pheidias was asked to sculpture the statue, he first built a workshop identical in size to the temple of Zeus. Then he errected a wooden framework, or a “skeleton”, for Zeus. Pheidias and his workmen covered it with plates of ivory for the god’s flesh and sheets of gold for his robe and ornaments. When the statue was completed, it was disassembled and transported to the temple. There, in the temple, Pheidias reassembled the statue. It was in 435 BC. For eight centuries the statue of Zeus at Olympia was to remain one of the world’s greatest wonders.
One Greek poet described the statue like this: “On his head a wreath of olive branches is sculptured. In his right hand he holds a figure of Nike made of ivory and gold… In his left hand, he holds a sceptre inlaid with every kind of metal, with an eagle placed on the sceptre. His sandals are made of gold, as is his robe. The throne is decorated with gold, precious stones and ivory.”
The statue stood on a platform about 6,5 metres wide and 1,0 metre high. The height of the statue itself was about 13 metres (equivalent to a modern four-story building). The statue was so large that it barely fitted in the temple. The enormous size of the statue fascinated both poets and historians. Strabo wrote that Pheidias “…has shown Zeus seated, but with the head almost touching the ceiling, so that we have the impression that if Zeus moved to stand up he would lift off the roof.” That way, perhaps, the sculptor tried to show the power of the god who could shake Olympia and its inhabitants.
As legend says, when Pheidias finished his work, he came up to the statue and asked: “Are you pleased, Zeus?” Suddenly the sculptor heard a sound of thunder. That was how Zeus expressed his delight.
In 394 AD, the Roman emperor Theodosius banned the Olympic Games. He considered them to be pagan practices. The Temple of Zeus was closed. Later it was damaged by earthquakes, landslides and floods, and, finally, burnt in the 5th century. 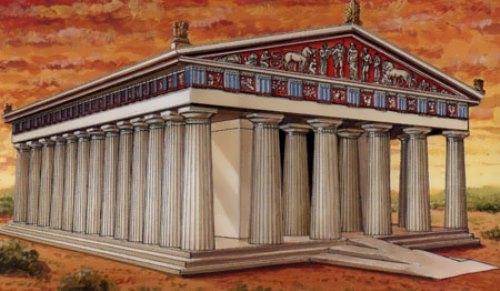 There are some guesses about the statue’s fate. According to some accounts, it was destroyed in 350 AD. Other sources say that the statue was removed to Constantinople where it was destroyed by a severe fire in 462 AD. We may believe any version now, but, unfortunately, one fact is true: the majestic statue is gone forever.
Contributor: N. Zavarina
From Speak Out 1-2, 1998 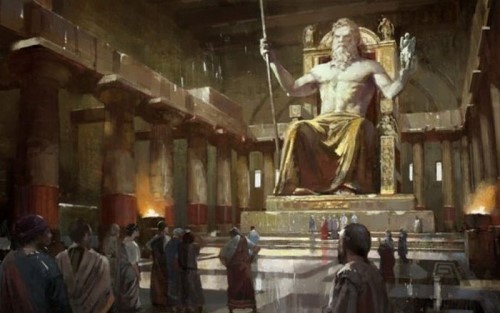