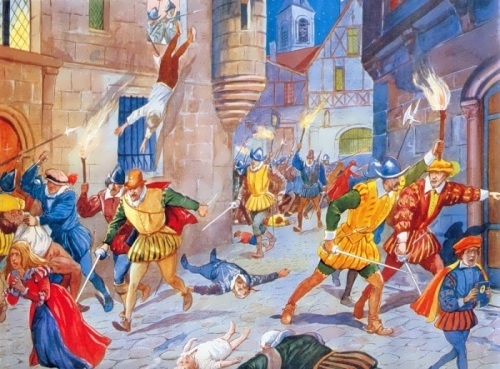 About 450 years ago, on August 24, 1572 the capital of France literally drowned in rivers of blood that appeared on its streets on the eve of St. Bartholomew’s Day. A wave of violence swept through Paris, and later in other towns and villages. The carnage lasted for several weeks. St. Bartholomew’s night became a radical change in the religious wars in France and left an indelible mark in the minds of Protestants.
In the XVI century, Europe was torn by religious strife. Catholics fought against Protestants, although, both of them were Christians. But the Protestants did not recognize the saints, the angels, the cult of the Virgin. They did not worship icons and relics. Protestants did not have monks, and they did not give the clergy celibate. But the most important was the fact that Protestants refused to recognize the authority of the Pope. They preferred receiving divine grace directly from God, without the mediation of the Catholic clergy.
Many active participants of the religious wars of that time weren’t very religious. Most of them fought because of their friends, countrymen, their lords.

If you want peace – prepare for war
Charles IX and his mother, the Dowager Queen Catherine de Medici were on the side of the Catholics. Thanks to the Queen the Peace of Saint-Germain-en-Laye was signed on August 8, 1570. It put an end to three-year civil war between Catholics and Protestants, however, most radical Catholics refused to accept it. Guise family sought to avoid the presence of Coligny at court. However, Catherine de ‘Medici and her son Charles IX were trying to cool down the militant mood of their co-religionists. In addition, they were accompanied by financial difficulties that forced to maintain peace and to have friendly relationships with Coligny. Huguenots had well-armed army and controlled the fortified towns of La Rochelle, Cognac and Montauban. To consolidate the peace between the two warring parties, Catherine de Medici had planned the wedding of her daughter Marguerite de Valois and the Protestant Henry of Navarre (future King Henry IV) on August 18, 1572. But neither the Pope nor the Spanish King Philip II shared the policy of Catherine. 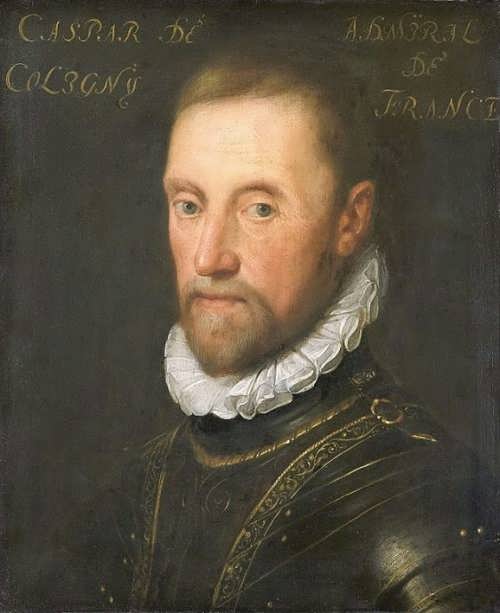 Ambitious Admiral Gaspard de Coligny was killed in the massacre

A large number of eminent Protestants gathered in Paris to accompany Prince Henry at the marriage ceremony. But the vast majority of Parisians were Catholics, and they were against the presence of the leaders of the Huguenots. Ordinary citizens were frustrated because of poor harvests, increased taxes and increased prices, so, they were outraged by the luxury of the royal wedding.
Catherine de Medici did not get the permission of the Pope to the marriage. She persuaded Cardinal Charles de Bourbon (the only Catholic in Bourbon family) to marry a couple.
Governor of Paris, Francois de Montmorency, saw an explosive situation and left the city a few days before the wedding.
On August 22 Admiral Gaspard de Coligny was wounded in the street. At the time of the shot, he bent down to fix shoes, so he was only wounded. Suspicion fell on the royal family. Charles IX promised to punish the guilty and sent his best doctor, the famous Ambroise Pare, the father of modern surgery. However, it was impossible to resolve the situation politically. A new war was going to break out anyway. It was necessary to decide something.
St. Bartholomew’s Day massacre 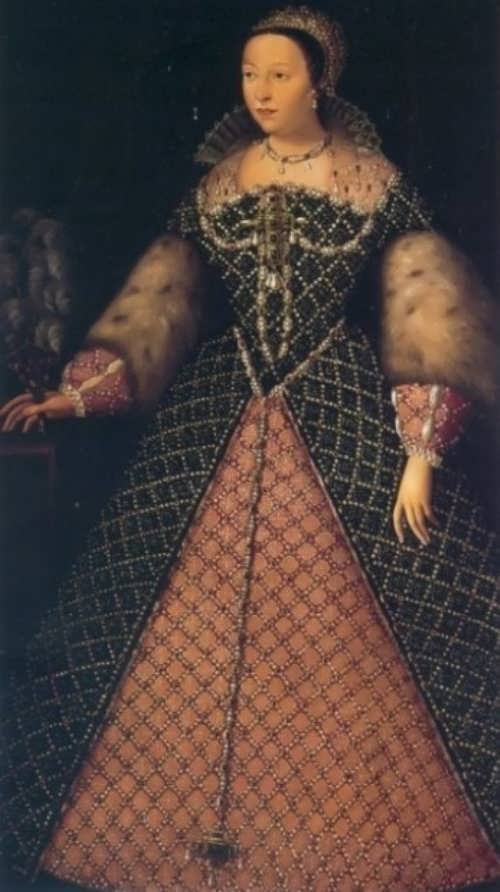 So, they decided to kill the limited number of Protestant leaders to weaken their movement as an organized military force on August 24, 1572, St. Bartholomew’s Day. At about 2 am Henry Guise’s people and the royal guard came to the Hotel de Betizi. They killed Admiral Coligny and threw his body under the feet of Guise. Then the church bell rang. Guise and the Duke of Anjou’s detachments of began to break into the houses, where the Huguenots were placed. Protestants were beaten and killed. Their actions were seen as a signal for the massacre for the Parisians. Massacre in Paris lasted a week. In twelve French cities, including Rouen, Troyes, Orleans, Angers, Bourges, Lyon, Bordeaux, Toulouse it lasted six weeks. According to some reports, the number of victims was 25 thousand people. 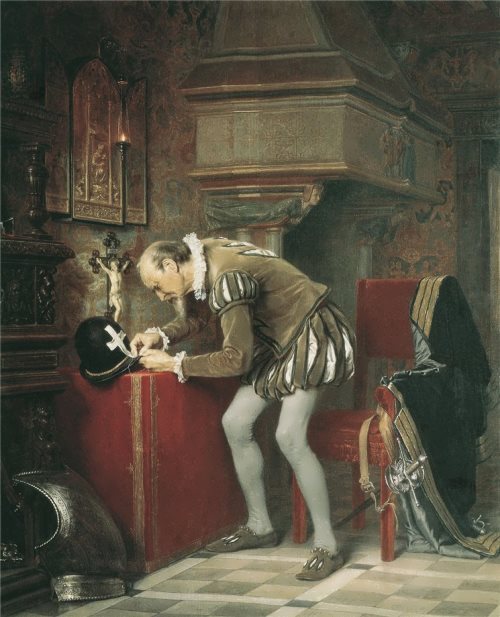 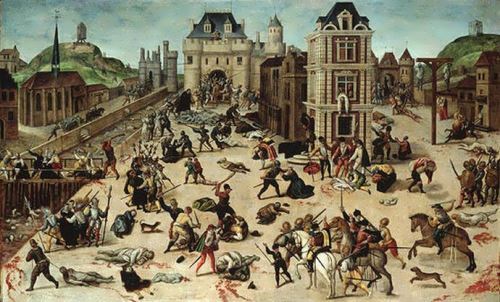 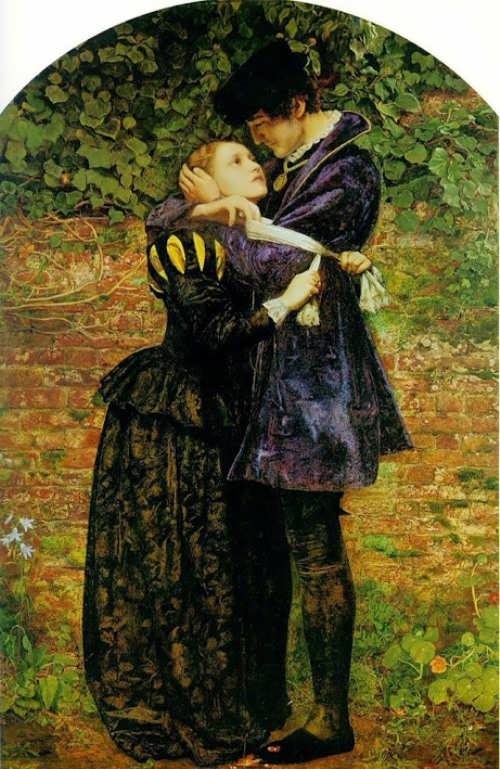 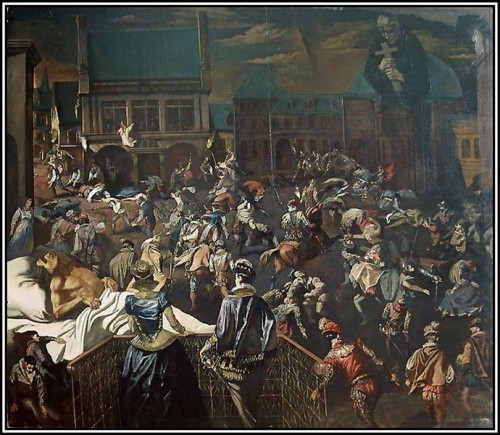 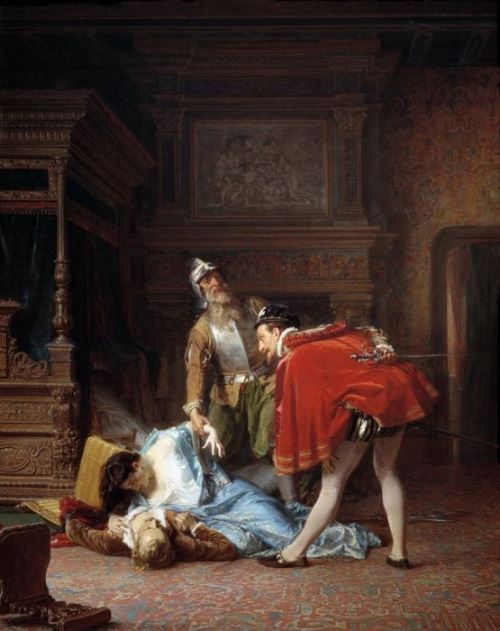 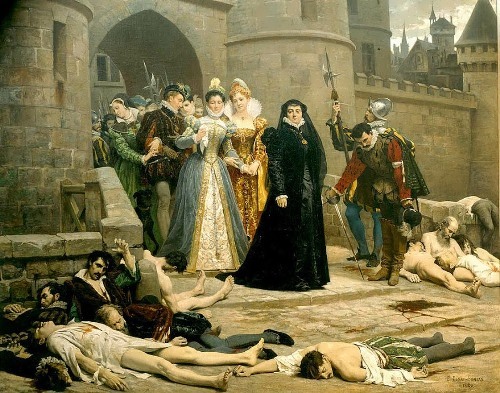 In the morning, at the entrance to the Louvre 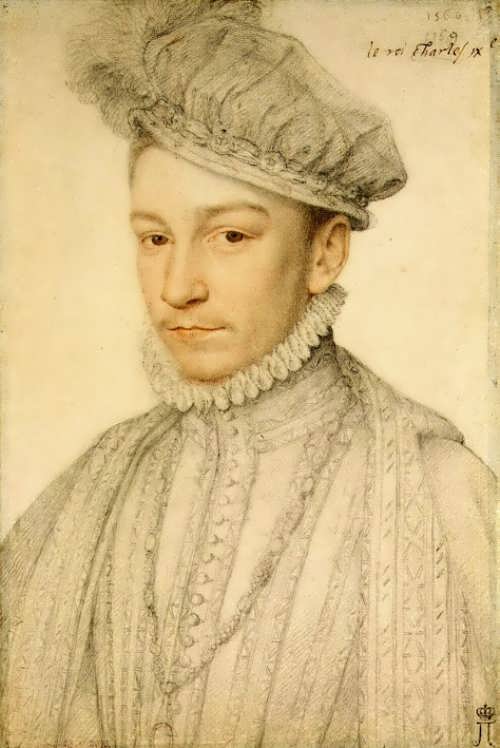 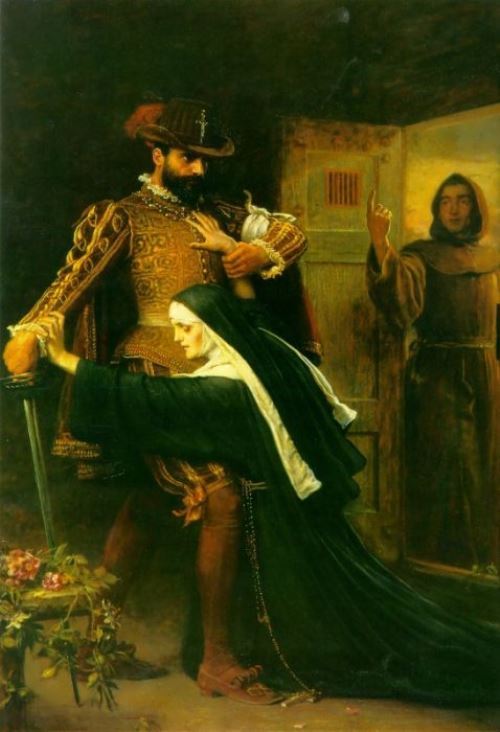 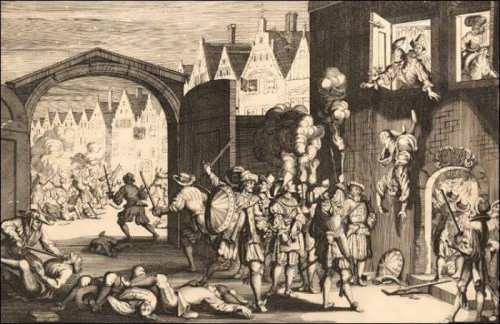 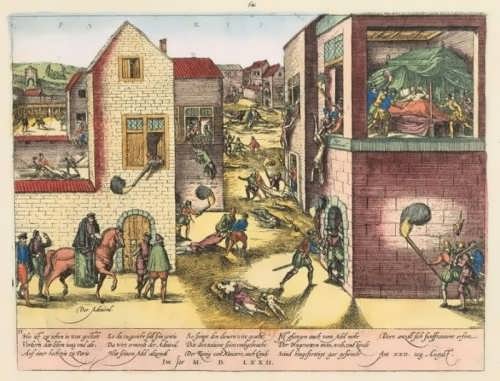 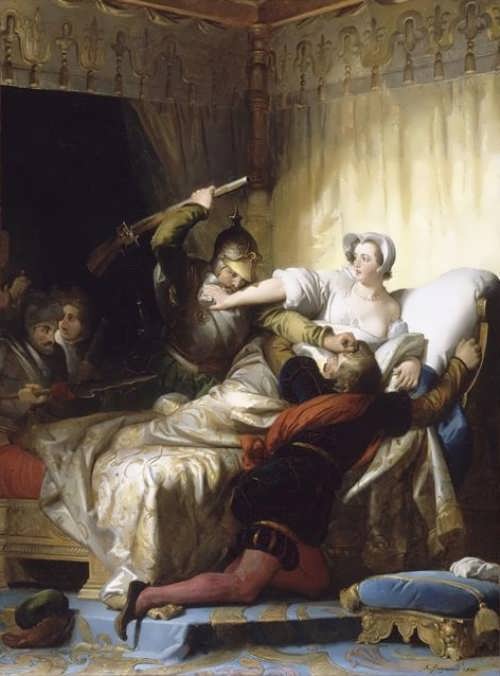 Scene in the bedroom of Marguerite de Valois 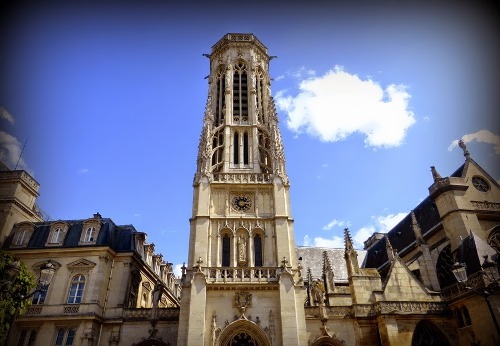 Tower of the church, which sent a signal to the beginning of the massacre