Scarab beetle was worshiped as a sacred creature by Assyrians and Phoenicians, Greeks and Jews, but most of all ancient Egyptians. Today this insect, depicted on papyrus and T-shirts or carved from precious stones, is one of the most popular souvenirs from the homeland of the pharaohs.
Scarab is a coprophagus insect which eats feces of other fauna. World fame and honor went to the scarab thanks to a unique tendency to roll dung balls with hind legs. You can say that this beetle is a football player, only walks on “hands” and moves always backwards.
The amazing insect was considered a living embodiment of the god Khepri – one of the main Egyptian gods, who created the world and ensures the constant renewal of all things.

The Egyptians believed that the body of the deceased person contained the germ of a new life, an immortal soul. After leaving the body, it began a new life in a new world, and the chain of such rebirths was infinite. For each incarnation, an impulse was needed that came from the god Khepri. Therefore, inside each mummy, the figure of the scarab or amulet with its image was put. But even during the life the Egyptians did not part with the sacred beetles, carrying with them one or even several insects made of basalt, granite, marble, faience, smalt, limestone and, finally, simple clay covered with glaze. Most of the amulets were bluish-green in color. Sacred beetles were depicted on the vestments of pharaohs and priests, on ritual supplies, on the walls of tombs and temples. 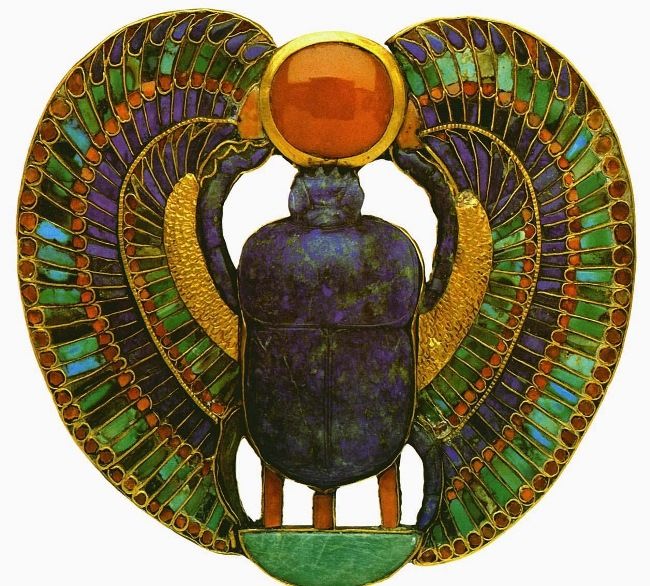 The divine scarab of the country of the pyramids is Scarabaeus sacer. This insect lives in the countries of North Africa, as well as in Southern Europe, Central Asia and even China and Korea. Scarab lives in deserts, semi-deserts, steppes and forest-steppes. Pastures with sandy soil are especially attractive for it. The insect passes several stages in its life: an egg, a larva, a pupa, an adult insect.
As already mentioned, the ability to roll dung balls made the scarab a sacred creature in the eyes of the ancient inhabitants of the Nile Valley. For a long time, the “ball game” remained for scientists “terra incognita”. Fabre, the author of the world-famous popular books on insects, studied in detail the habits of the beetle and published the results of his observations at the end of the 19th century. It turned out that the scarab makes balls not in order to lay eggs there, as some experts had suggested before Fabre. The ball is a beetle’s lunch convenient for transportation. Separating from the dung heap some of his food, the beetle forms a ball, rolls it into a place protected from extraneous views and begins digging a mink where it eats. The scarab is very gluttonous, and soon it has to get out for new food.
The scarab is a hard worker and a talisman with its image can not only attract luck, but also bring success in work. It gives youth and beauty to women, and stability and high earnings to men. The sacred scarab patronizes the travelers. 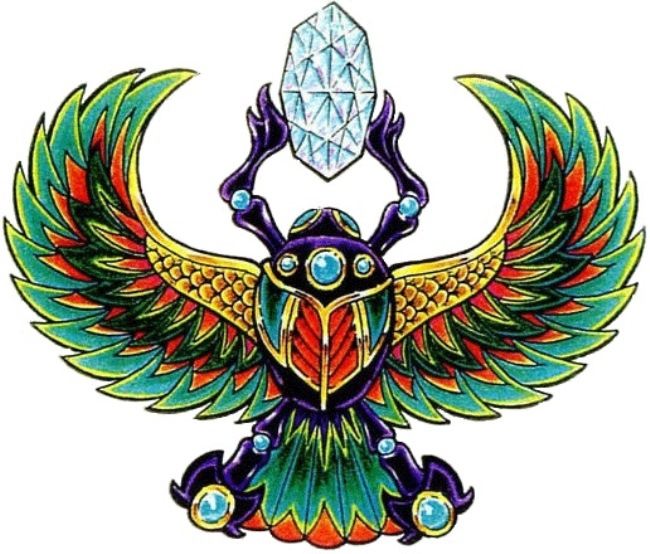 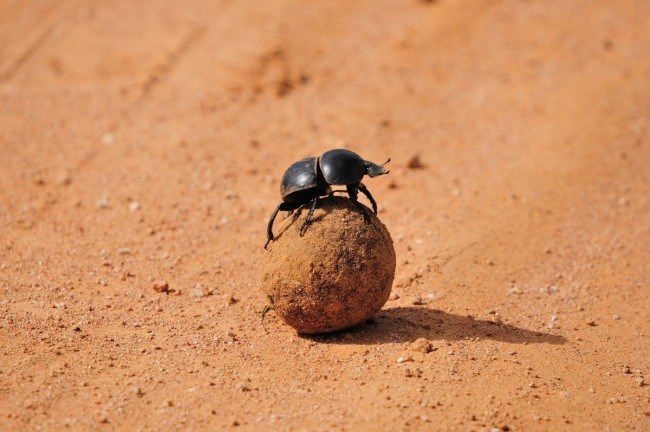 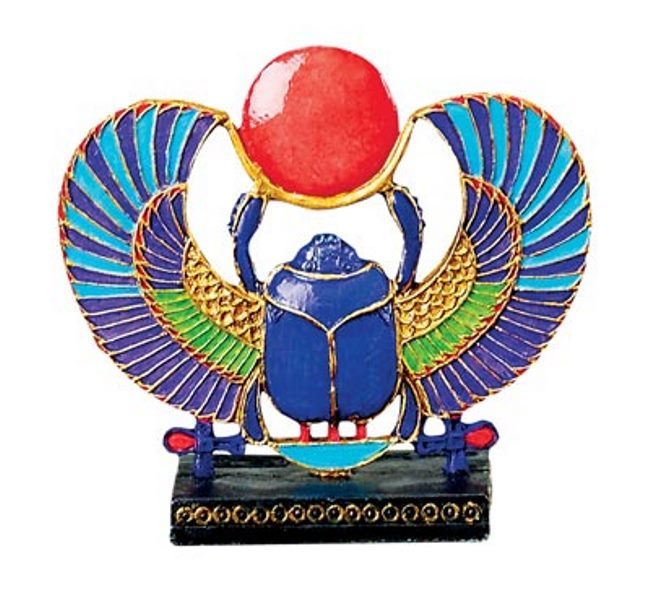 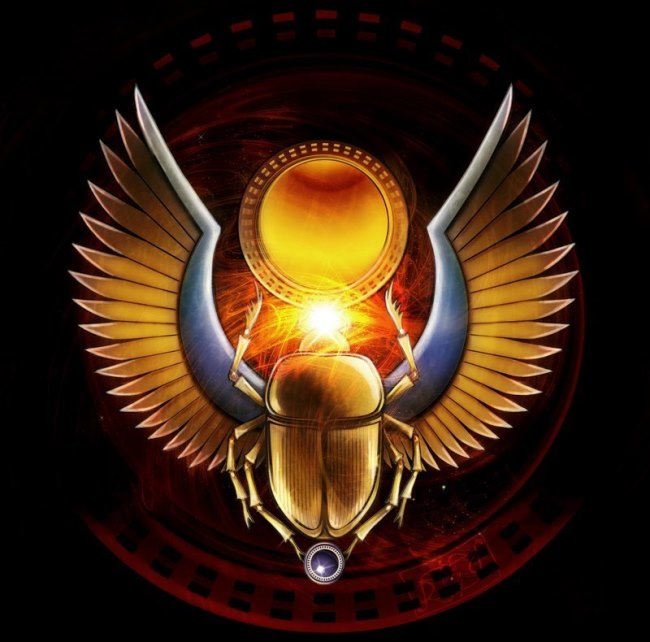 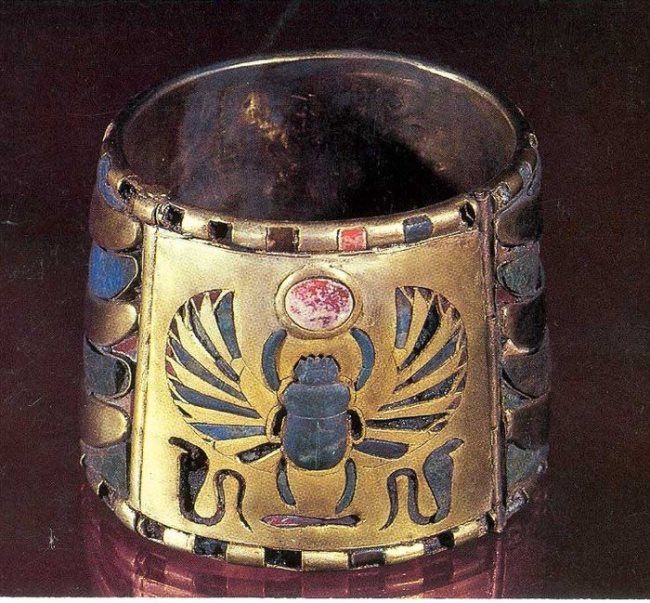 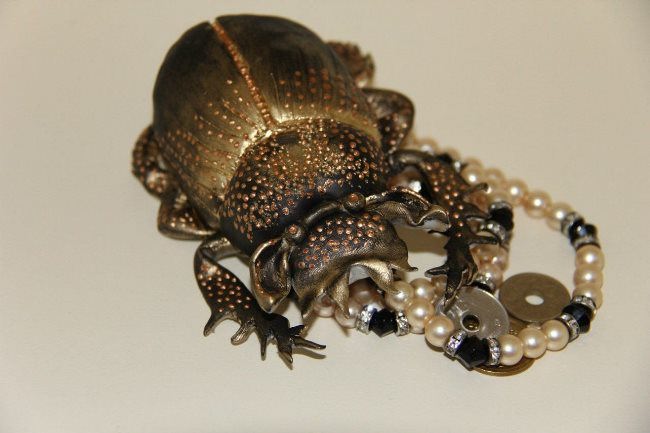 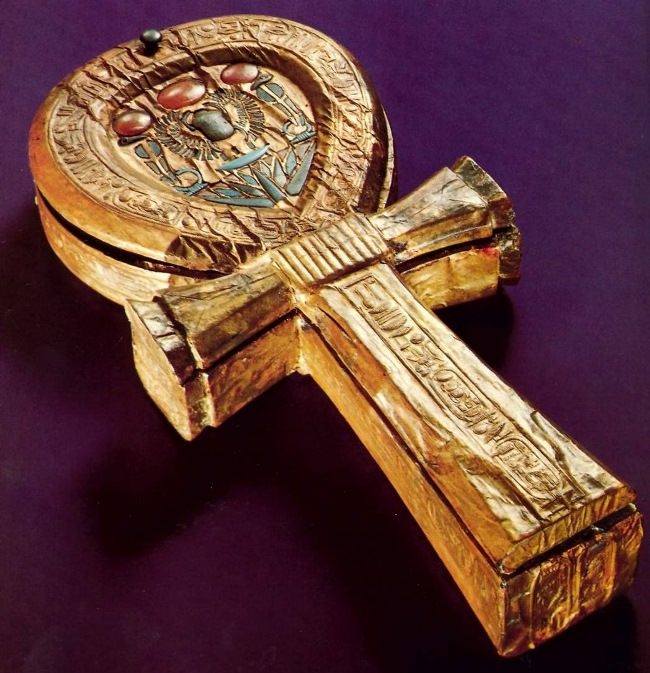 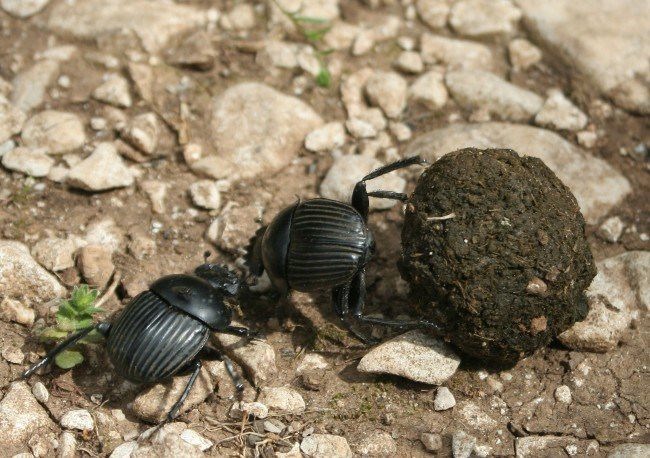 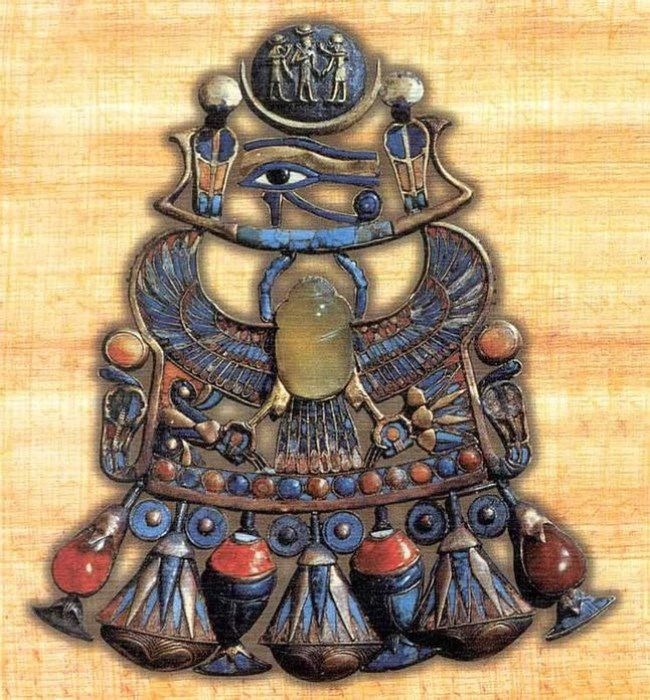 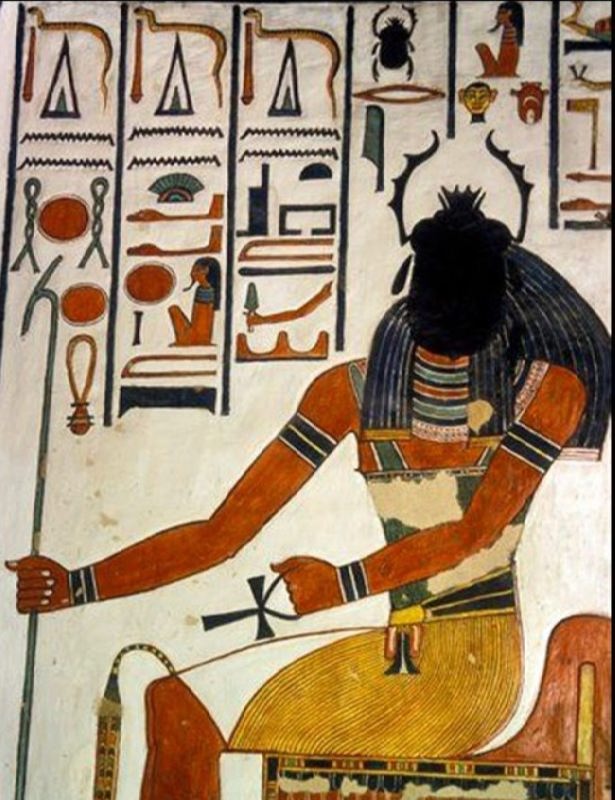 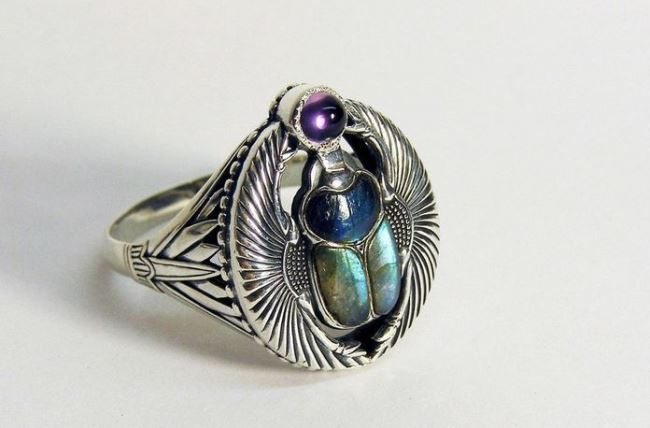 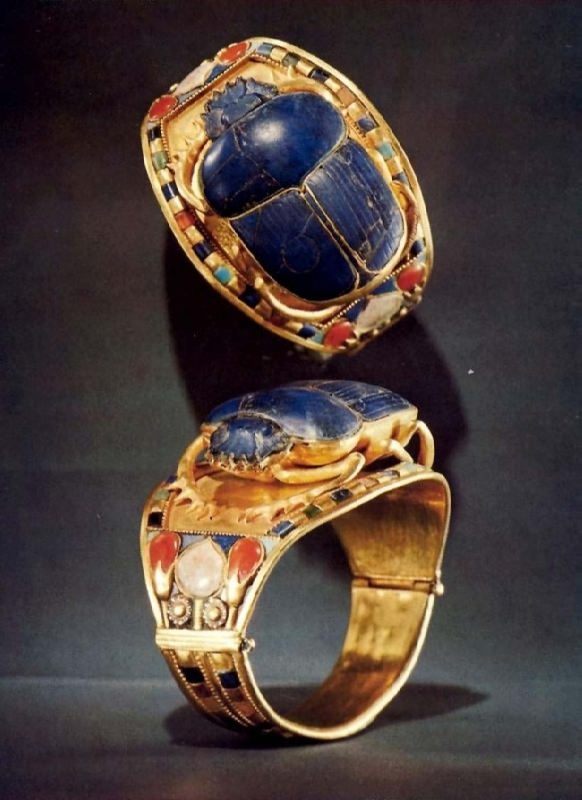 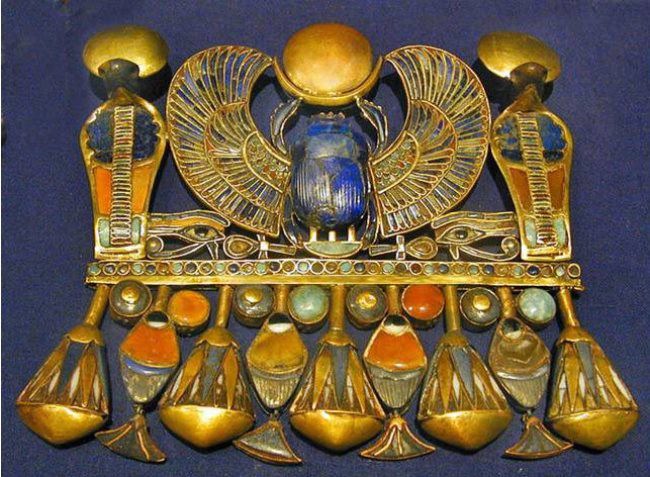 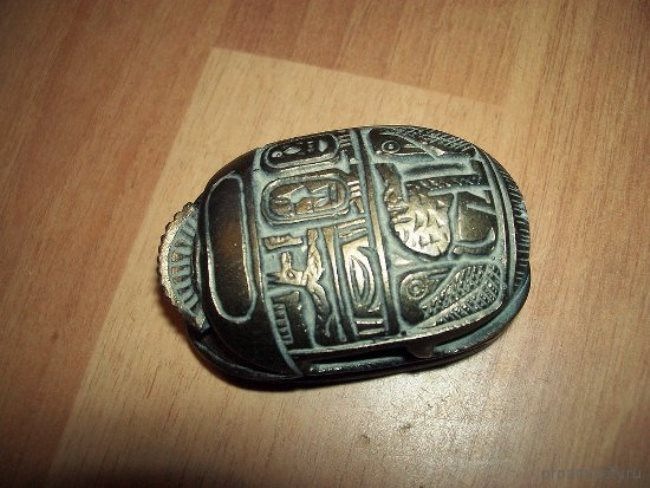 Talisman of a scarab beetle with protective symbols 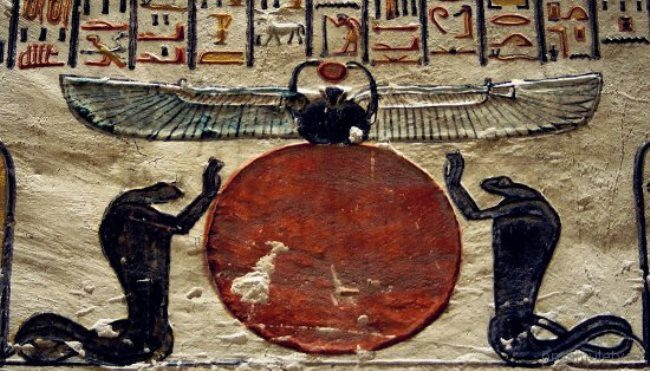 The image of the sun and the god Khepri 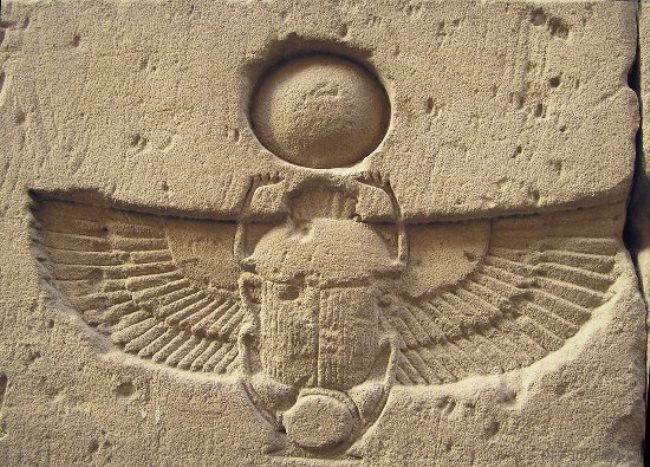 The relief with the image of the scarab in Ancient Egypt 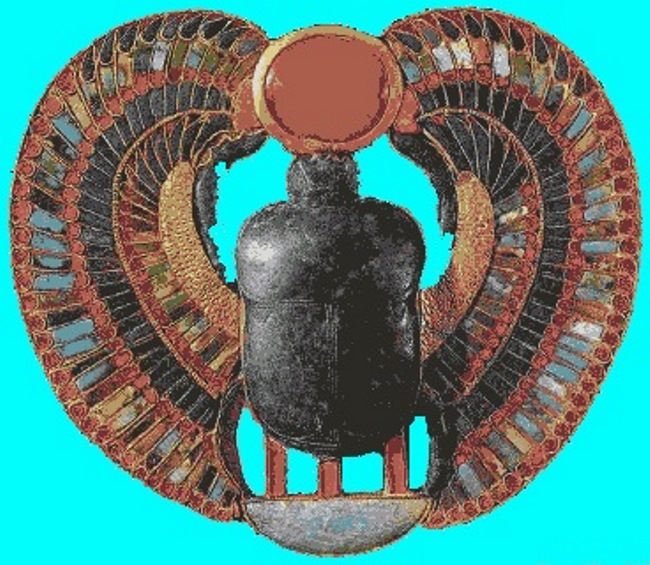 Winged scarab with a solar disk from the tomb of Tutankhamun. Cairo, Egyptian Museum 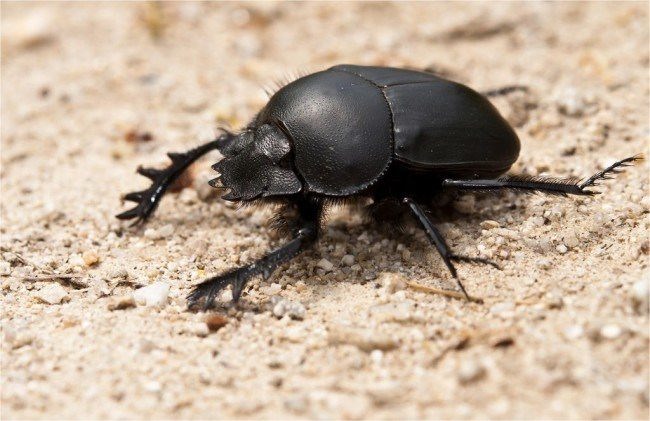 Monuments to the scarab beetles 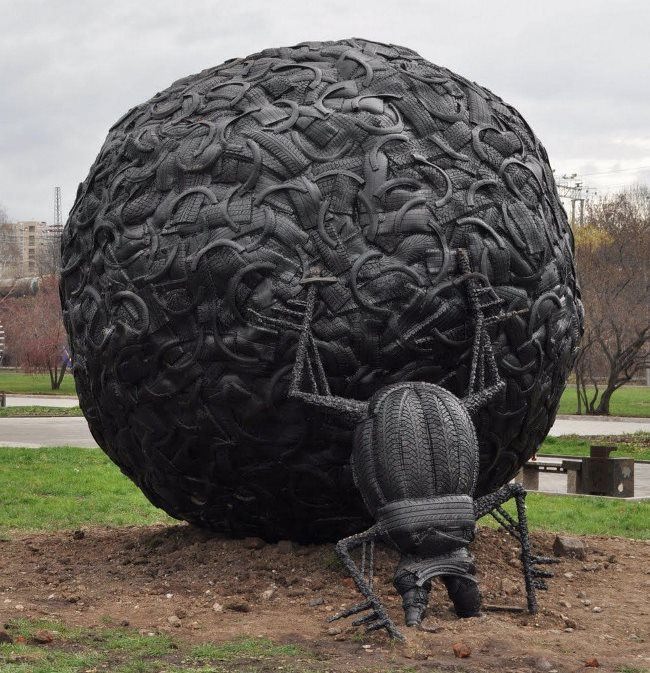 Monument to a scarab beetle in Russia 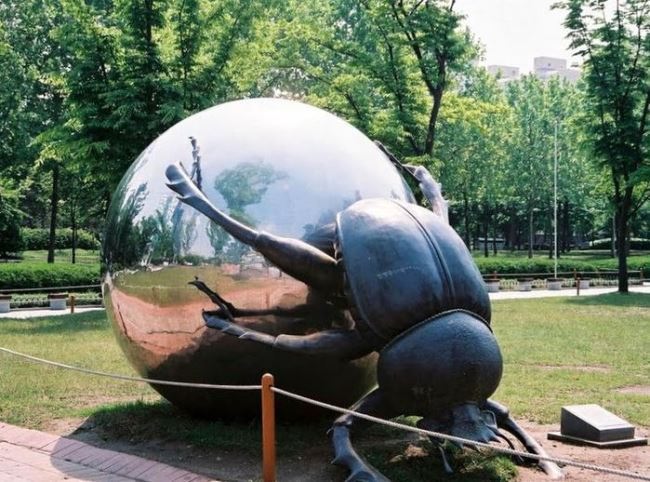 Monument to the Scarab beetle in Anian, South Korea 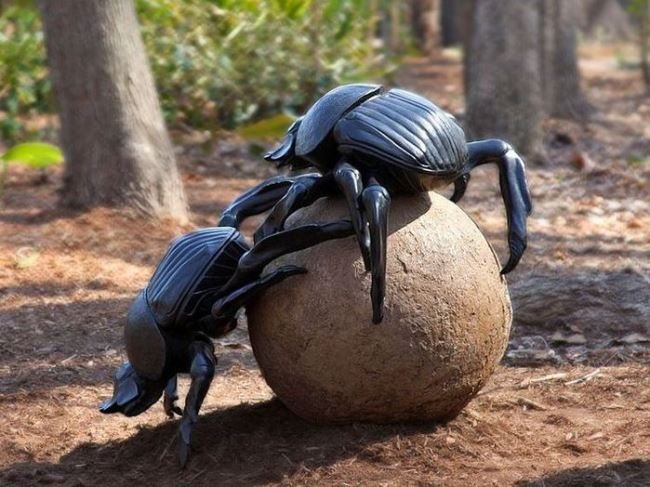 Monument to the Scarab beetle in Ashboro, North Carolina, USA 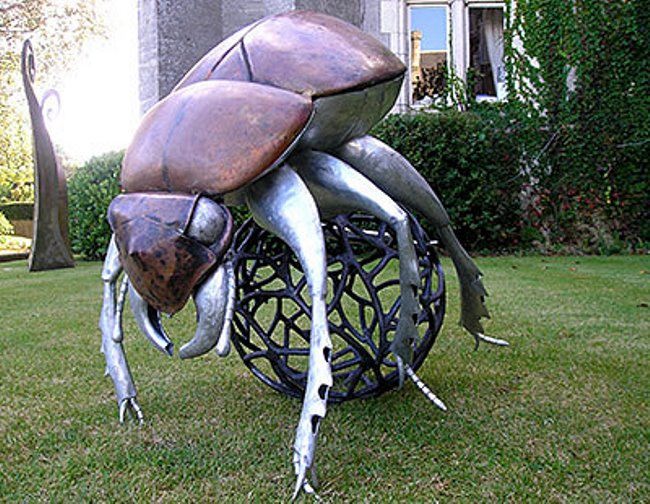 Monument to the Scarab beetle in Brussels, Belgium 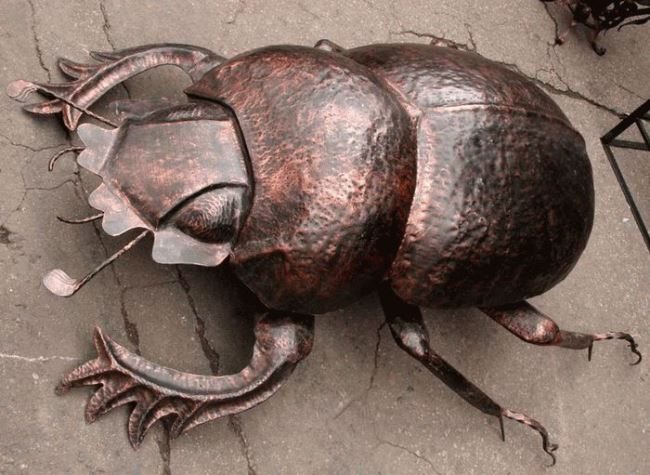 Monument to the Scarab beetle in Donetsk, Ukraine 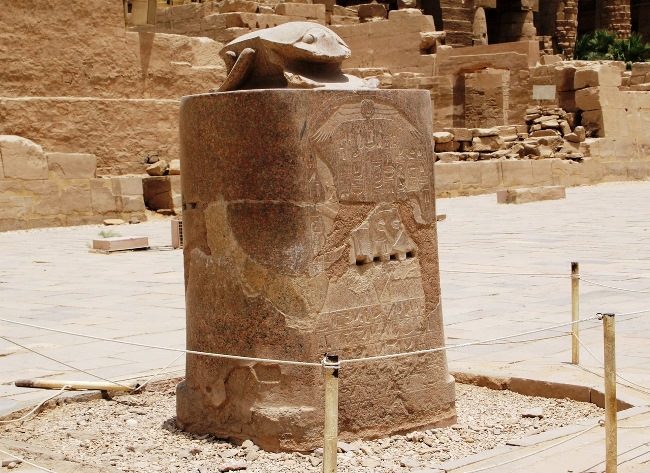 Monument to the Scarab beetle in Luxor, Egypt 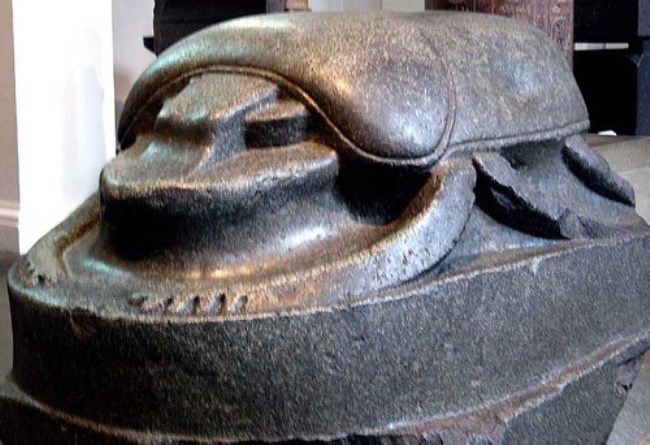 Monument to the Scarab beetle in the British Museum, UK 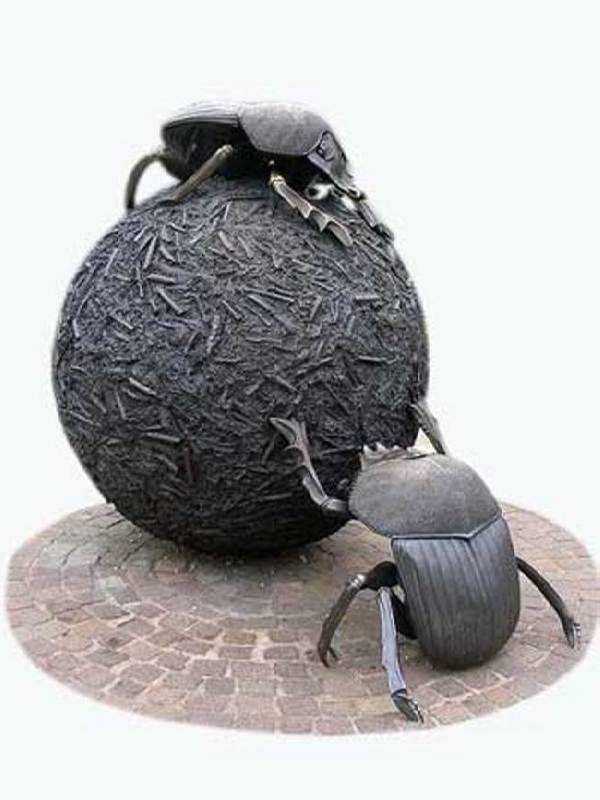 Monument to the scarab beetle of the London Zoo 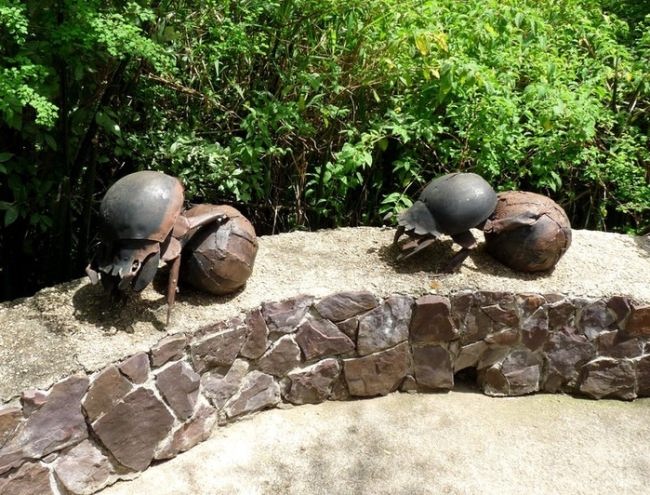 Monument to the Scarab beetles in Tanzania 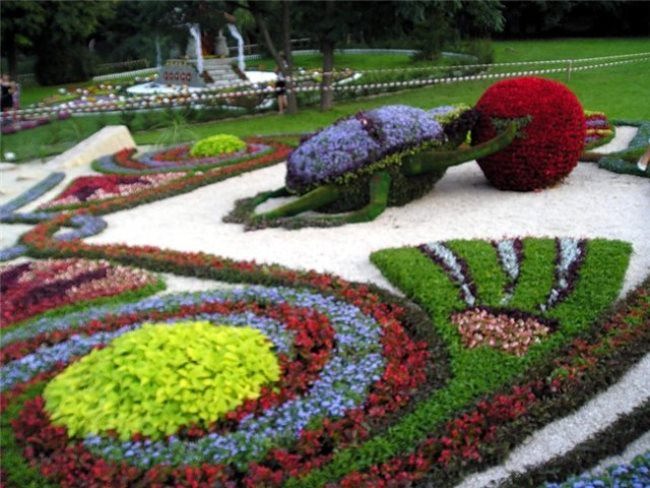 Scarab on the flowerbed