Red river phenomenon. The Yangtze River – the longest river in Asia and the third-longest in the world

Red river phenomenon has been seen repeatedly – in Canada, China, the US, and in other places of our planet. Rivers, rains, lakes and seas spontaneously turn blood-red, like in the above photo – when abundant rains painted Cameron Falls River red. The phenomenon was captured by a couple of tourists who arrived in the Canadian province of Alberta. Precipitation washed natural pigment of the river in the rocks where the river originates, which gave the water a rich red color. Within two hours, the water flow changed its color.

The Red River flows in northern U.S. and southern Canada. It flows north, forming the Minnesota–North Dakota boundary, before entering Manitoba and emptying into Lake Winnipeg after a course of 545 mi (877 km). It was explored in 1732–33 by the French voyageur Pierre Gaultier de Varennes et de La Vérendrye. The river, named after the reddish brown silt it carries, was a transportation link between Lake Winnipeg and the Mississippi river system. The Red River Settlement, an agricultural colony, was founded in 1811 near Winnipeg. Its fertile valley produces cereals, potatoes, and sugar beets and supports cattle raising.
The Yangtze river, which runs through the city of Chongqing in south-western China, turned a bright shade of orange-red in 2012. The cause of redness of the river still remains a mystery. Employees of Environmental Management reported that the water was taken for analysis, and the results will be ready in a few days. The authorities have also put forward the original assumption that someone just dropped some dyes off a bridge into the water, which led to a change in water color.

This is not the first time that a Chinese river abruptly changed its color. In August 2012, in the waters of the lake in Hebei Province took place a massive sea fish deaths. The water of the lake has got a red tint. In September 2012 in the red blood stained the water in China’s largest waterway – the Yangtze River – the city of Chongqing in the area. The government also said then that it is not industrial pollution, and the sand is washing away and gave the river water such an unusual flavor. While local residents believe the opposite.
In August 2011 red was the water in the Jinchuan River in the city of Nanjing. This happened as a result of the emission of a large amount of waste by the numerous industrial enterprises located along the river.
Red tide is a common name for a phenomenon also known as an algal bloom. Just a bunch of aggravated sea critters. Also when this happens it can remove the oxygen from the water causing things to die.
Sources:
trasyy.livejournal.com
livescience.com 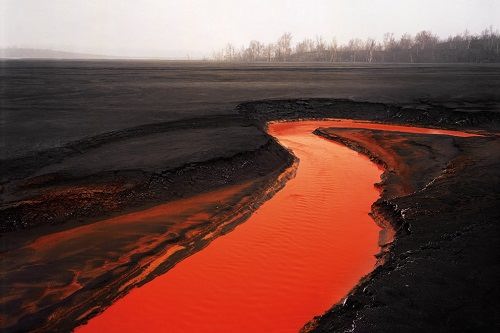 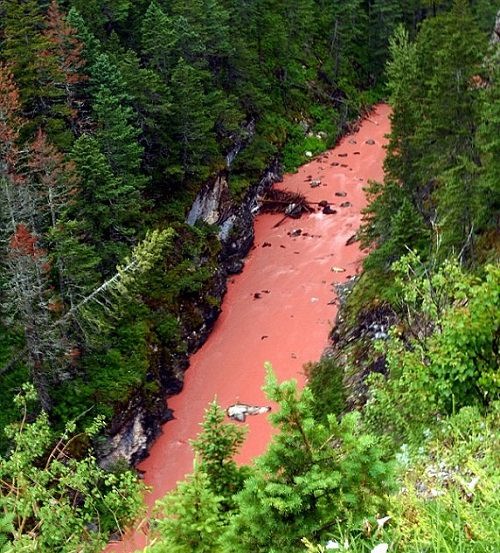 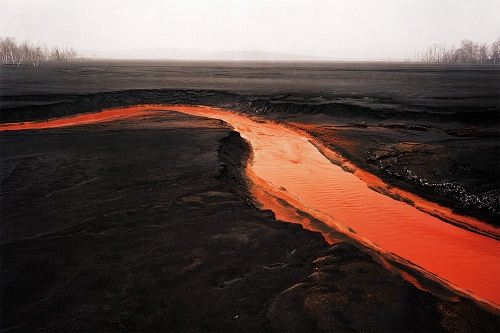 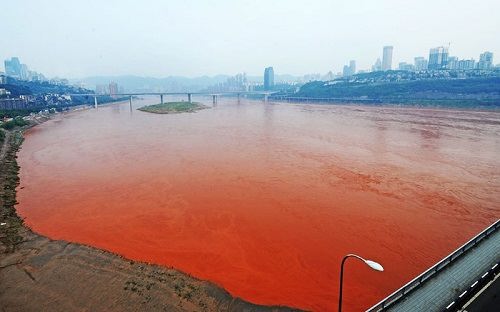 The Yangtze River of red color. The cause of redness of the river still remains a mystery 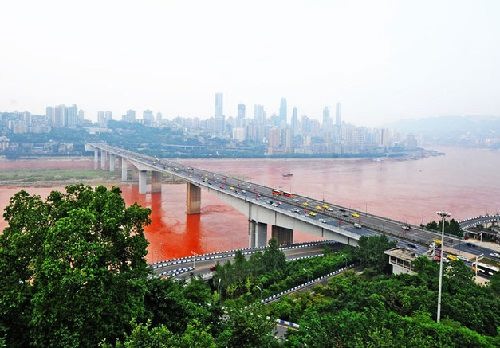 The Yangtze River suddenly turned red, like something apocalyptic straight out of the Bible