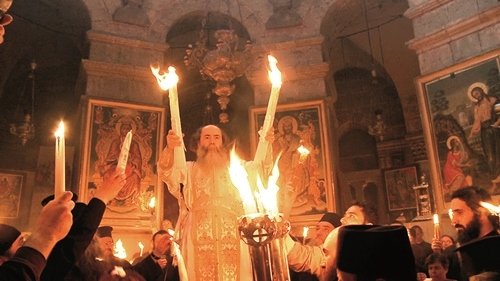 The Miracle of the Holy Fire is known as “The greatest of all Christian miracles”. It takes place every year, on the same time, in the same manner. It occurs every year on the Orthodox Easter Saturday. The miracle happens at 2:00 PM. No other miracle is known to occur so regularly. The miracle happens in the Church of the Holy Sepulcher in Jerusalem. Scientists consider the church to contain both Golgotha, the little hill on which Jesus Christ was crucified, as well as the “new tomb” close to Golgotha that received his dead body.
Pilgrims come from all over the world. The Holy Fire spreads to all people present in the Church. The ceremony may be the oldest unbroken Christian ceremony in the world.
Every year many believers claim that this miraculous light ignites candles, which they hold in their hands, of its own initiative.

All in the church wait with candles in the hope that they may ignite spontaneously. The blue flame is seen to move in different places in the Church. The light does not burn, because it is of a different consistency than normal fire that burns in an oil lamp. 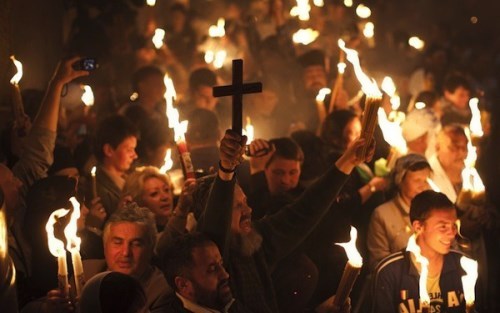 The Miracle Leads to Faith

Only the Orthodox Churches attend the ceremony framing the miracle. It only occurs on the orthodox Easter date and without the presence of any Catholic authorities.
There are people who believe it is fraud and nothing but a masterpiece of Orthodox propaganda. They believe the Patriarch has a lighter inside of the tomb. These critics, however, are confronted with a number of problems.
Matches and other means of ignition are recent inventions. Only a few hundred years ago lighting a fire was an undertaking that lasted much longer than the few minutes during which the Patriarch is inside the tomb. One then could perhaps say, he had an oil lamp burning inside, from which he kindled the candles, but the local authorities confirm to have checked the tomb and found no light inside it. 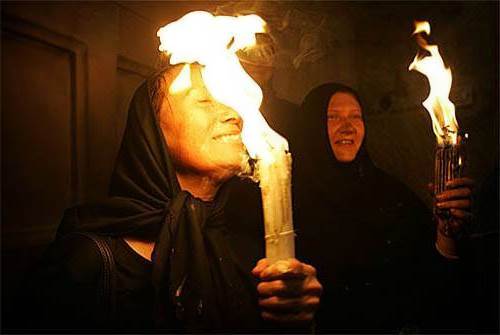 Some interesting facts about the Holy Fire
– In Jerusalem Holy Fire is called the Holy Light.
– The earliest mention of the Holy Fire dated back to the IV century. During the history the expectation of the fire lasted from five minutes to several hours. Before the Holy Fire there are light flashes in the church.
– Holy Sepulcher accommodates 10 thousand people. The church is divided into six Christian churches: the Armenian, Greek Orthodox, Catholic, Coptic, Syrian, Ethiopian. The keys to the temple of the Holy Sepulcher are stored by Muslims.
– The first fire is coming in Edicule (tomb of the Lord): the lamp with oil and 33 candles are ignited.
– The first 3-10 minutes of burning the Holy Fire does not burn.
– The Holy Fire never becomes the cause of fire. 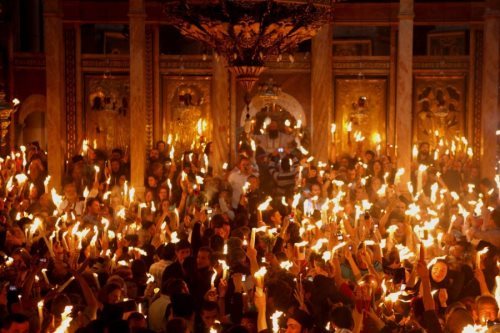 The Miracle Leads to Faith 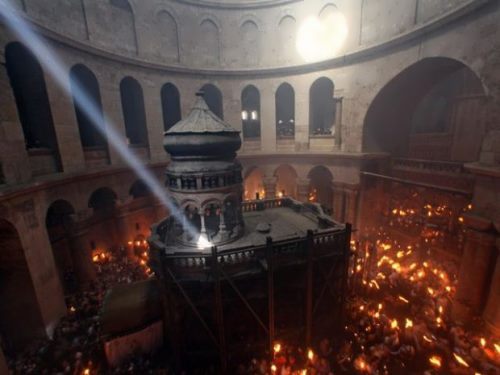