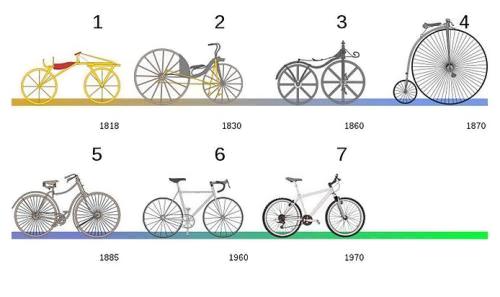 It seems that there is no simpler invention in the world. There is even an expression “Don’t reinvent the wheel”, in Russian it sounds like “Don’t reinvent the bicycle”. It means don’t invent (or say) something that is well known to everyone. But for a long time people did without wheels and bicycles, of course.
It is believed that the Ural blacksmith Yefim Artamonov built the world’s first bicycle with pedals and steering wheel in 1801. From the Urals, he came to Moscow and his bike appeared in the royal museum of rarities and… was forgotten. But until now, there are disputes, whether this event is real or just a historical tale.
In 1815 the German Baron Karl von Dreze invented a device which he called “machine for running”. It looked like a two-wheeled scooter with the steering wheel and without pedals, with wooden frame and could have a good speed for that time. People were delighted! 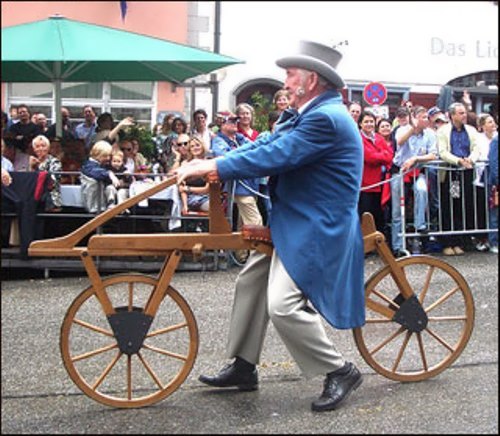 In the 60s of the 19th century Pierre Lalman, who made prams, screwed pedals to the front wheel and industrialists interested in his invention. They began to produce bicycles with a metal frame, which replaced the wooden one. So, the history of the bicycle began.
The bikes became popular when Englishman Thomson invented the tire and vet Dunlop cut a piece of garden hose and pulled it on the rim. Not air, but water was used in the tire, so the bikes were very heavy. Imagine that all bikes were without brakes and they were invented only in the late 19th century. 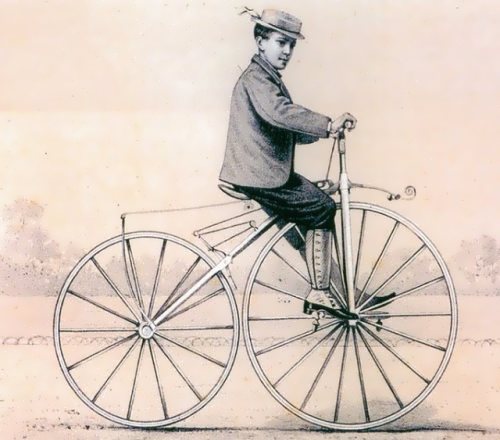 The penny-farthing bicycle, with its huge front wheel and tiny back wheel, has become the symbol of cycling in the Victorian era. It takes its name from the old British penny and farthing coins, one much larger than the other. This type of bike was also known as “spider”. In England James Starley started making these bikes in about 1870. Then in 1878 in America Albert Pope began producing the Columbia Bicycle, modelled on the penny-farthing.
These new bikes became extremely popular in both places. They were a great improvement on the older bicycles, known as boneshakers. The front wheel of the penny-farthings measured up to 1.5 meters across, so they could go much faster.
The penny-farthing was still quite dangerous to ride. Its shoulder-high seat made getting on and off very difficult. Not only that, but with the large front wheel the bike often overturned. Even a small stone in the road could throw the rider to the ground. Going downhill many cyclists were thrown forwards over the handlebars and ‘came a cropper’, that is, were seriously injured or even killed.
By the 1890s penny-farthings had almost disappeared. They were replaced by the modern bike, we know today with gears and a chain. Today, however, many enthusiasts collect these old machines and companies make modern versions.
The popularity of bicycles became less when cars appeared. But today, once again bicycles have become a favorite form of transport. Firstly, they are useful for health and don’t pollute the environment. 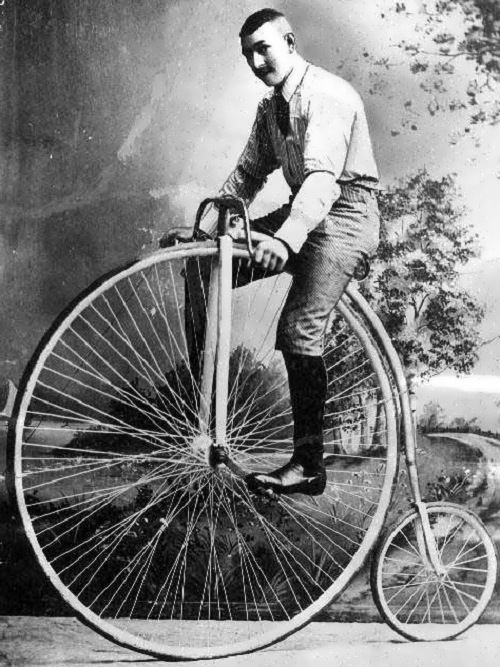 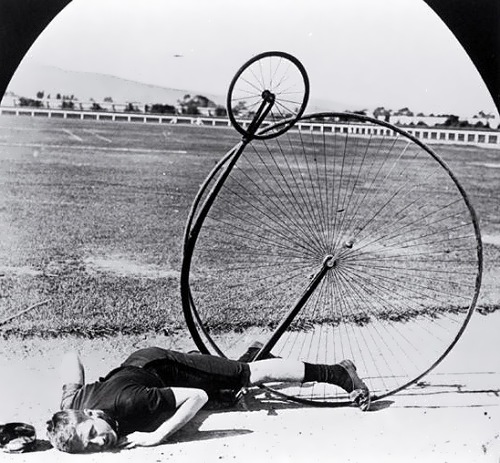 Biking is not only good exercise, but switching from a car to a bike can make our planet cleaner and greener.

The Netherlands has more bicycles than any other nation! In the Netherlands about 85% of people go cycling. Most of the land is flat, so it’s a good place to ride a bike. It’s also very safe. There are 17,000 kilometres of bike paths, and most of the time, cars have to wait for bicycles.
The car is the world’s number one polluter. It produces lots and lots of dangerous stuff. Carbon dioxide and carbon monoxide are particularly dangerous. Carbon dioxide is a greenhouse gas that keeps solar radiation trapped within the atmosphere. Carbon monoxide is a poisonous gas that can lead to serious health problems.
More and more cities have special places where people can borrow a bike – just like we borrow books from libraries.

The Mayor of London, Boris Johnson, is determined to turn London into a ‘cyclised’ city – a civilised city where people can ride their bikes safely and easily. He thinks that cycling has an important role to play in the future of Britain’s capital. ‘Put simply, it’s the best way to get around our city, and the most important tool for making London the best big city in the world,’ he said.

Many people around the world — especially those in crowded cities – have realised that bicycling is an easy way to get around and a great way to cut down on pollution.