Finches are songbirds of the finch family.
The Latin word “fringilla” is closely related to the word “frigor” which means cold. These birds come back among the first in the very early spring, that is, they return to the end of March, when the snow has not melted yet.
This bird is the size of a sparrow with body length of about 14.5 centimeters. The wingspan is 24.5-28.5 centimeters and it weighs 15-40 grams.
Male finch is one of the most brightly colored birds in Europe. They are easily recognizable by the grayish-blue crown of the head, the tawny chest, the chestnut back and the bottle-green base of the tail. Females are not so bright. Their body is covered with brownish feathers, on the wings and tail they have white stripes.

Many are convinced that the finch is a migratory bird. But it depends on the place of settlement. Flocks that have chosen the middle zone of Russia, Siberia in winter go to the Mediterranean coast, to the floodplains of Central Asia. Some flocks reach the Canary Islands, British Isles, North Africa, represented by Morocco, Tunisia, Algeria. If finches originally settled in the southern regions, they lead a sedentary lifestyle or wander for short distances to neighboring regions without crossing the country’s borders.
In most of Russia, the former Union republics, countries of Western Europe and the Middle East, the most common finch is European. The average body length of the European finch is 16 centimeters, the tail is 7 centimeters, weight is 22 grams. Its long 11 mm sharp beak is brown in color, except for the mating season, when a blue hue appears. The entire lower part, throat and cheeks are brownish or wine, the back is a tone lighter. The neck and cap on the head of the finch are gray-blue in color, a contrasting black spot stands out above the beak. Just below the back, colors include yellow and green tones. The wings are outlined in white. The finch in mating plumage looks elegant. 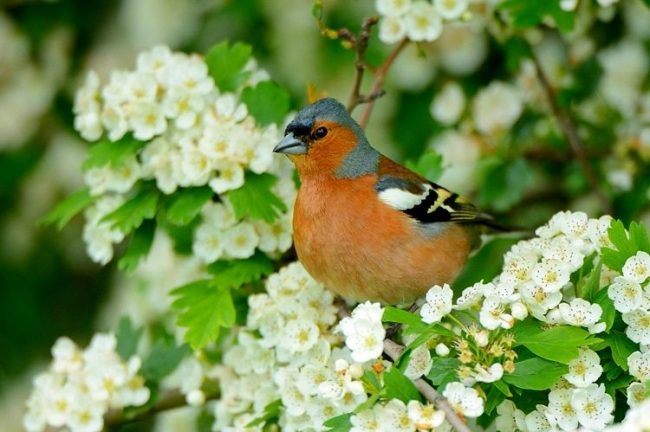 The females and the grown chicks are much paler.
During the mating and nesting period, finches create couples, the rest of the time they live in flocks. A female is engaged in creating a home for future chicks, although both future parents are involved in the collection of building material. Sometimes construction is delayed for a long period due to nasty weather. During the construction of the nest, the female flies daily about 1300 times down to take the building material and returns with it to the nest. They lay 4-7 eggs painted in a pale bluish-green or reddish-green color with pinkish-purple spots.
For two weeks of hatching, the male tirelessly takes care of his girlfriend and future brood, bringing food, protecting the nest from natural enemies. Parents feed chicks for 14 days. After the young birds get on the wing, they do not fly far from the nest, but parents continue to feed them for another seven days. In September, birds become completely independent. 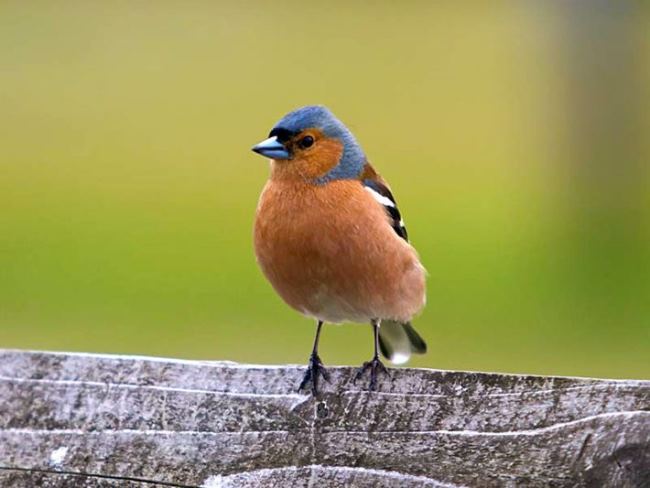 In England, in the last century, singing finch competitions were held.
Despite the fact that finches fly fast, they spend most of their time on the ground in search of food. Because of this, they often die from the attack of predators. These birds have many natural enemies: squirrels, ermines, large birds (magpie, jay, crow, woodpecker).
A blue feather of a finch can become a talisman. In the old days, such feathers were considered a talisman of family happiness. 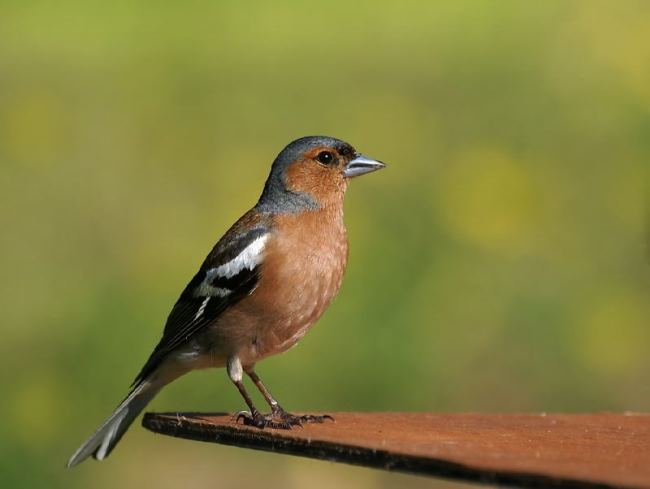 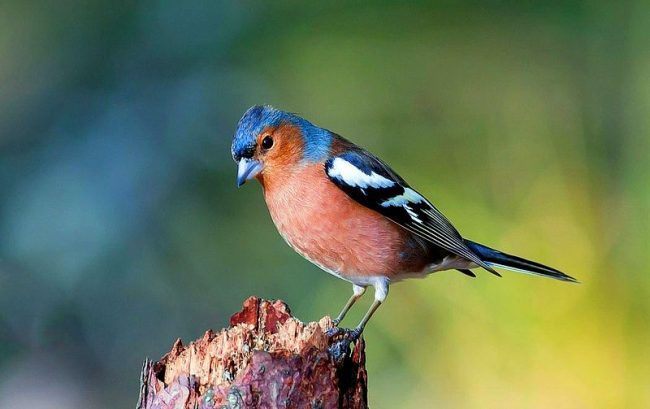 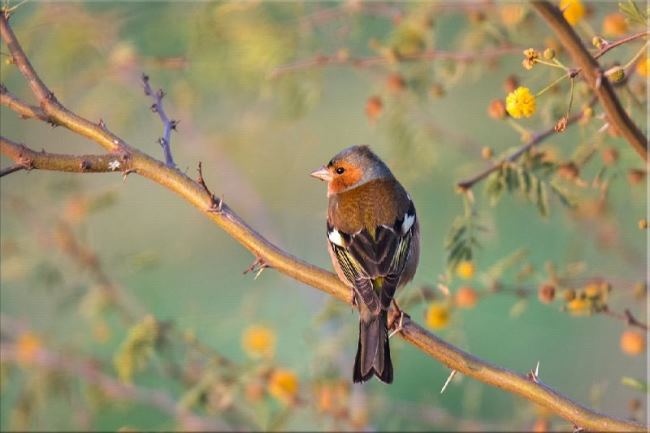 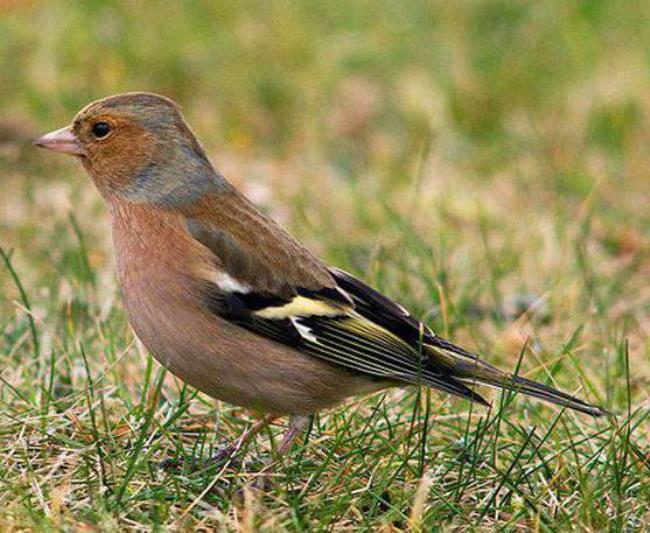 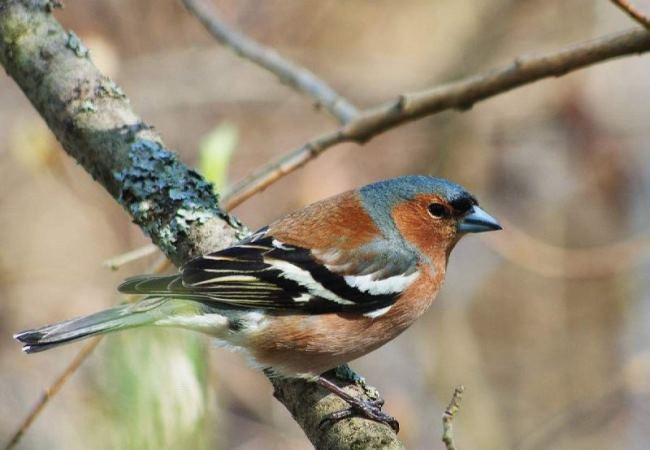 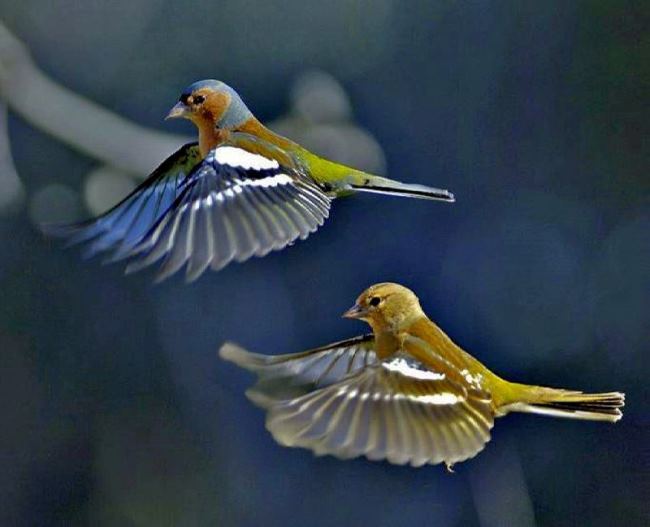 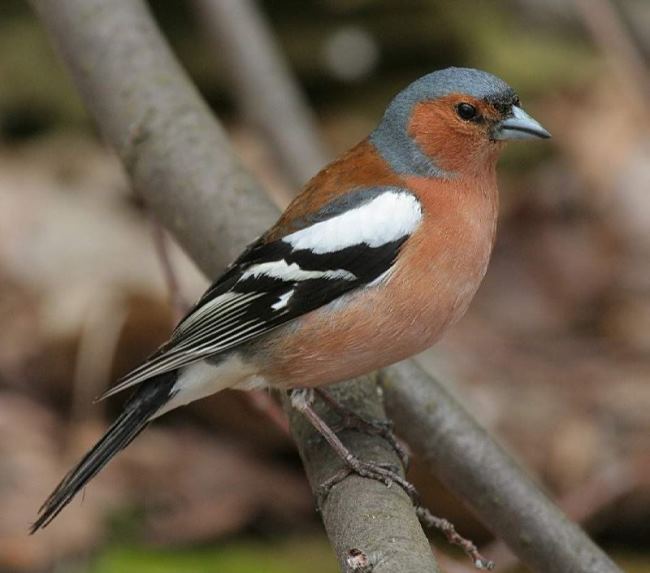 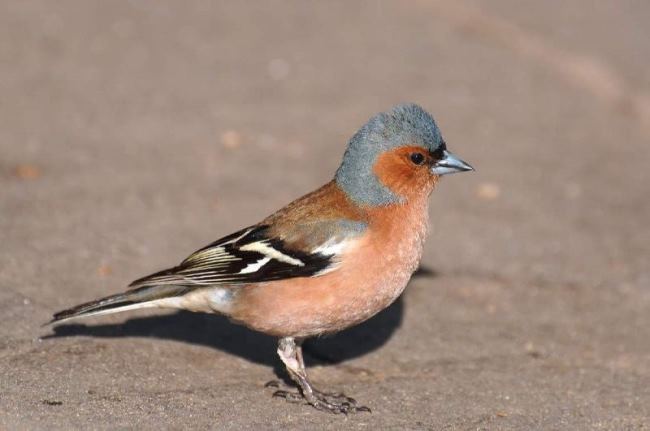 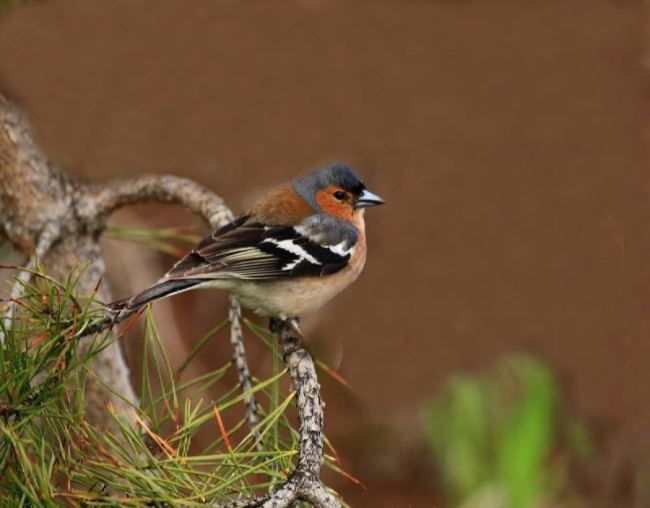 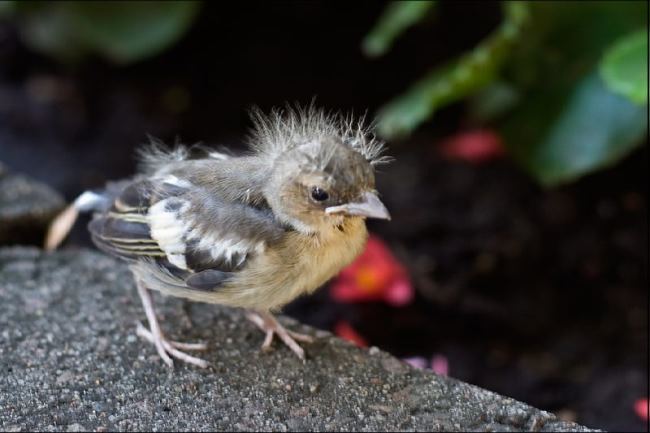 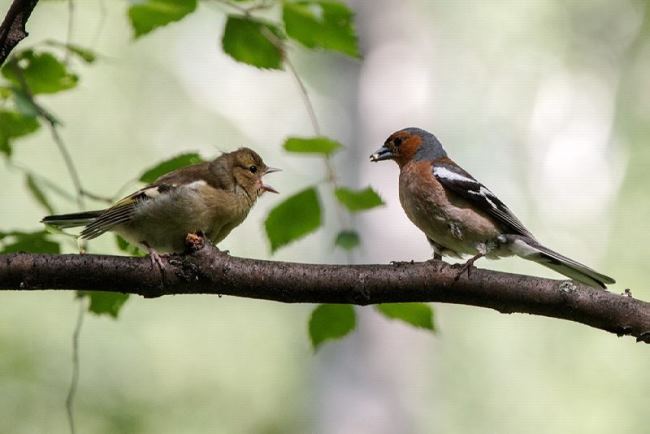 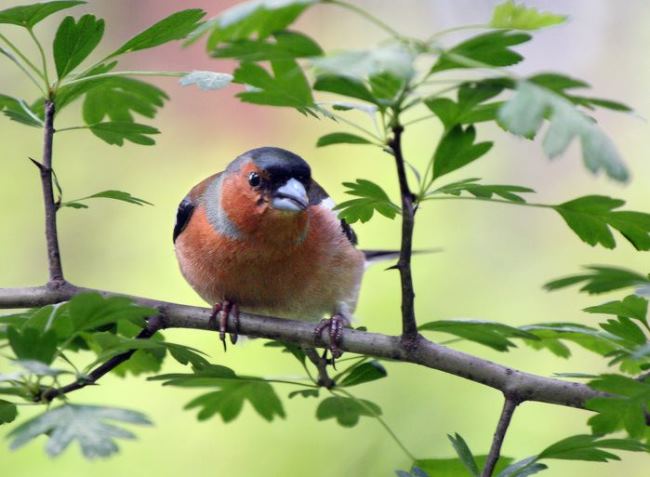 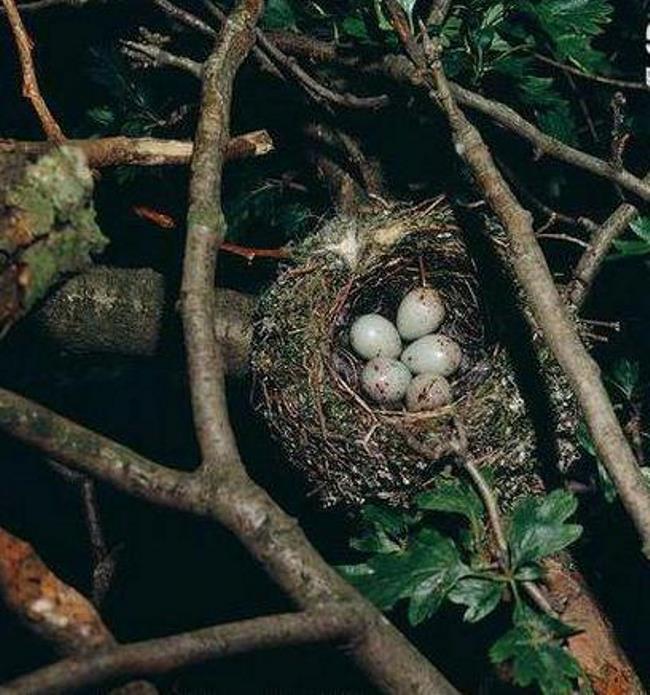 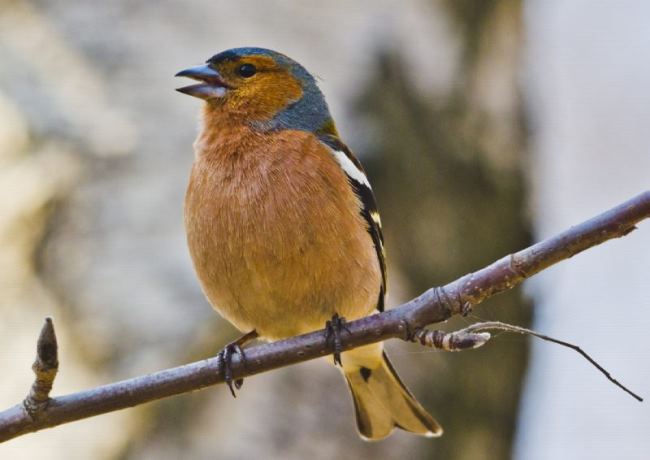 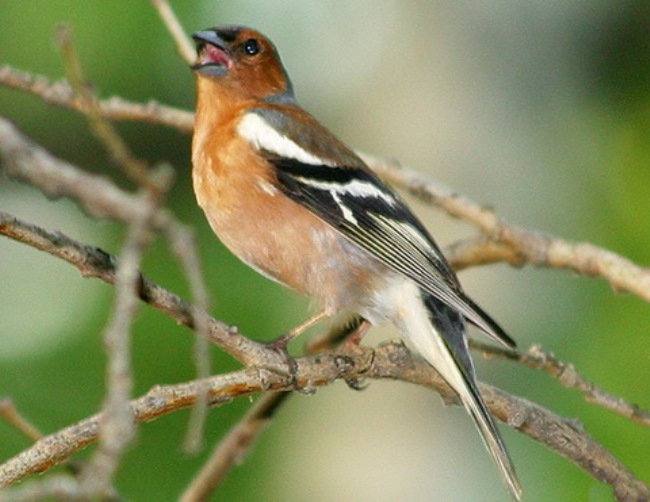 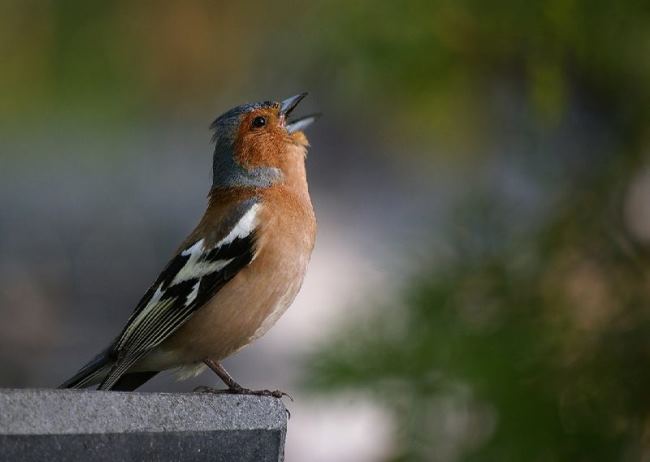