« There was never a story sadder
Downshifters – who are they? »

Everybody knows that during an earthquake the ground shakes, lots of buildings fall down and sometimes cracks appear in the earth.
Our planet is covered with a thick crust, which is cracked into more than twenty sections. These cracked sections are called tectonic plates and they are always on the move. They move very slowly, but with incredible power. An earthquake happens when they rub against each other or collide with each other.
Earthquakes happen in all parts of the world. But most of them are so small that we don’t notice them. Big earthquakes are really dangerous.

Rift Valley in Africa was created by repeated earthquakes over thousands of years. An enormous trench, which can be seen from the moon, was formed.
In 1556, 830,000 people died in China because of an earthquake. It was the highest death toll caused by an earthquake. In 1976 in the same China a huge quake caused the death of 250,000 people.
San Francisco is a rich city on the west coast of North America. People live there and are still building houses, shops and office blocks, but San Francisco sits on one of the greatest earthquake zones in the world. Children have earthquake drills at school, but, unsurprisingly, people hope that it will never happen.

Tsunami – killer waves
A tsunami is a chain of huge waves, again caused by an earthquake, but this time under the seabed. The first wave is not necessarily the most destructive. Tsunami waves can be very long and there may be an hour between them.
A tsunami is a Japanese word.
They can move very fast, too, sometimes at the speed of 800 kilometers an hour. If an earthquake happened in Los Angeles, a tsunami could hit Tokyo quicker than you could fly between the cities by jet.
When a tsunami reaches the coastline, it slows down, but its height grows. It is an incredibly dangerous natural phenomenon.
The most destructive tsunami in history is probably the Christmas weekend tsunami of 2004. It was caused by an earthquake in the Indian Ocean measuring 9.0 on the Richter scale. The huge waves crashed into several Asian countries and thousands of people lost their lives. 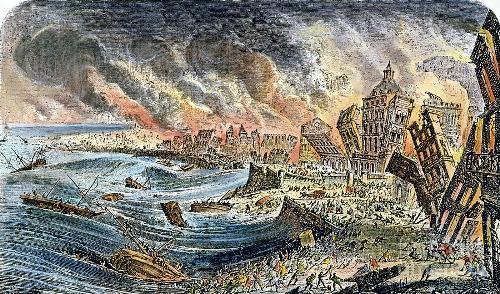 Wild and domestic animals showed very unusual behavior before tsunami and earthquakes. They seemed to know what was going to happen.
Elephants screamed and ran for higher ground. They not only sensed the tsunami but saved many people. As they ran off the beach, they lifted tourists onto their backs with their trunks, taking them to a safe place.
Dogs refused to go outdoors.
Zoo animals rushed into their shelters and nothing could make them come out.

Historians wrote that animals, including rats and snakes, deserted the Greek city of Helice just days before a quake destroyed the place in 373 BC.
In 1999 in Turkey dogs howled like wolves for two days before the earthquake struck. No one took any notice and many buildings fell down like stacks of cards, killing over 17,000 people. 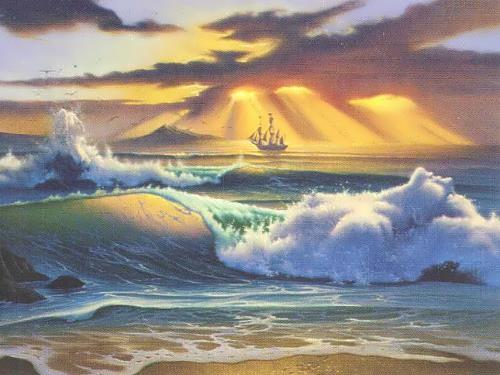 Interesting facts
– Earthquake kills an average 8,000 people a year and caused about 13 million deaths over the past four millennia.
– In Japanese mythology, a giant stingray named Namatsu causes the earthquake.
– Parkfield, a town in California, is called the “Capital of the earthquake.” There is a bridge that connects the two tectonic plates here.
– The most powerful tsunami with a wave height of 85 meters ruined the Japanese Ishigaki island in 1771.
– Zhang Heng, a famous astronomer from China, invented the first earthquake detector about two millennia ago. The device was able to fix the earthquake, the epicenter of which was located at a distance of 600 kilometers.
– Earthquakes can trigger volcanic eruptions, as happened to Mount St. Helens in 1980, and before the eruption of Mount Etna at the beginning of the Third Millennium (2002).
– English scientist John Milne constructed the first seismograph in 1880. Charles Richter introduced the scale measuring the strength of earthquakes, named after him, in 1935.
– Crust vibrations occur on the Moon, they are much weaker than on the Earth and called moonquake.
– On November 1, 1755 the capital of Portugal Lisbon was totally destroyed by the earthquake. The city was rebuilt in the late XVIII century. 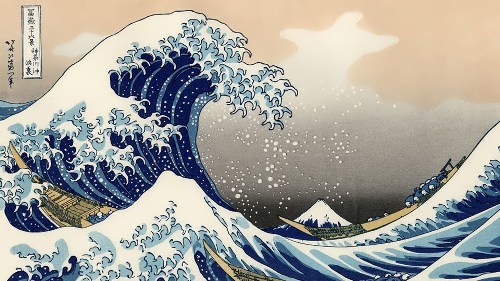 How are large buildings protected against earthquakes?
If a large building is firmly attached to the ground, an earthquake can rip it right off the foundation. Making a building more solid can solve the problem for some quakes, but it’s an expensive solution that only works for moderate quakes. There’s a better way to protect large buildings.
Base-isolated buildings can survive even large earthquakes because the building itself is not firmly attached to the ground. When the shaking starts, the building stays relatively still while the ground moves underneath.
There are several ways to base- isolate a building. Rubber pads can be inserted between the building and the foundation, or it can rest on-sliding or swinging bearings that move back and forth easily. Such a system protects the largest base-isolated building in the world, a new terminal at San Francisco International Airport. 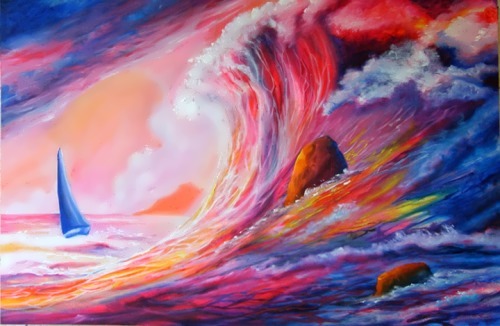 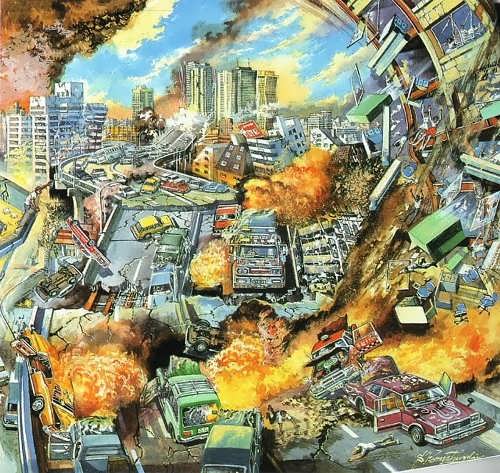 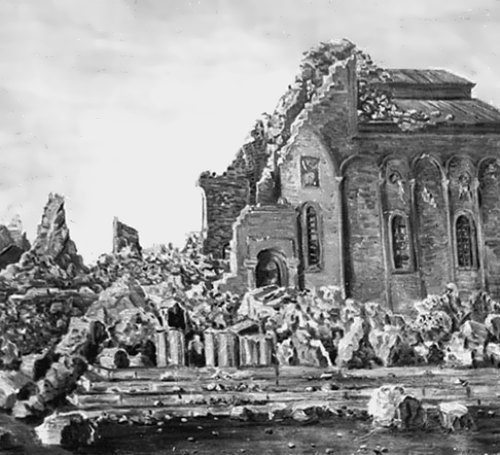 Spitak temple destroyed by the earthquake 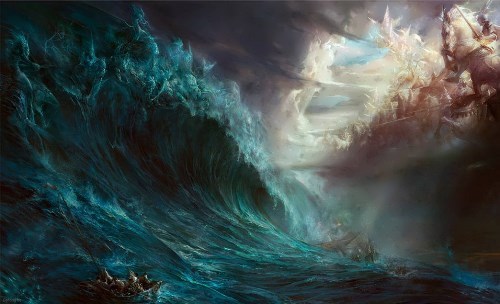 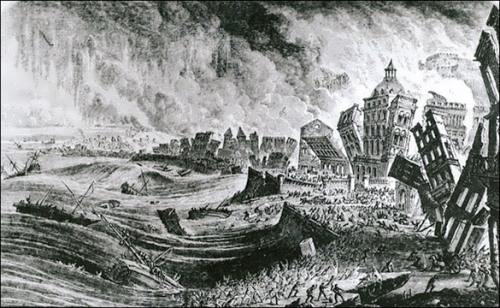 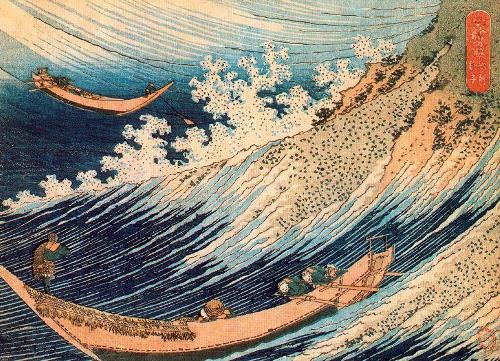 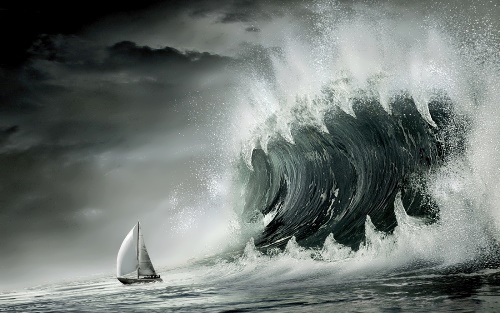 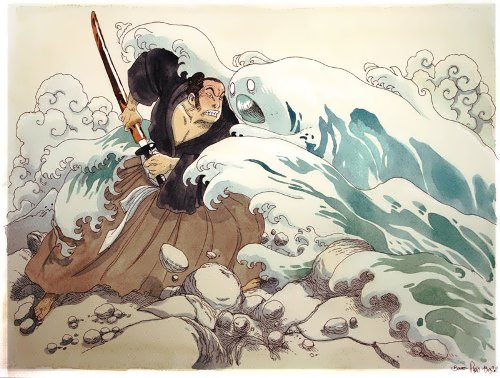 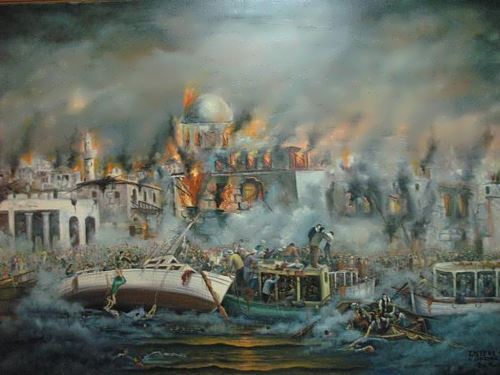