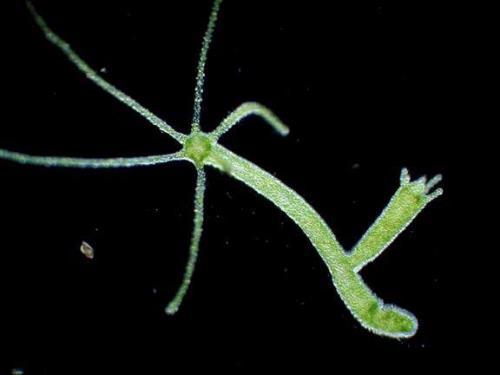 A hydra is a tiny animal that lives in water. They can regrow parts of their bodies. These animals were named after an imaginary creature from Greek mythology, the nine-headed hydra. According to the myth, it could grow two new heads for each head that was cut off.
The real hydra is only about 3 centimeters long. It has a thin body with an opening at the top which is used to eat food and to get rid of waste. Long tentacles grow around this opening. The hydra uses its tentacles to sting and paralyze its food – tiny animals.
The hydra can reproduce in two ways: release eggs, which are then fertilized in the water, and reproduce by budding. A small extension of the parent animal forms on the body wall. As this grows, a separate mouth and set of tentacles develops until eventually a replicate daughter cell of the parent hydra is produced. When the young animal has fully developed, the two separate and the young hydra drifts off in the current to become established elsewhere. (from Gale Encyclopedia of Science)
END_OF_DOCUMENT_TOKEN_TO_BE_REPLACED 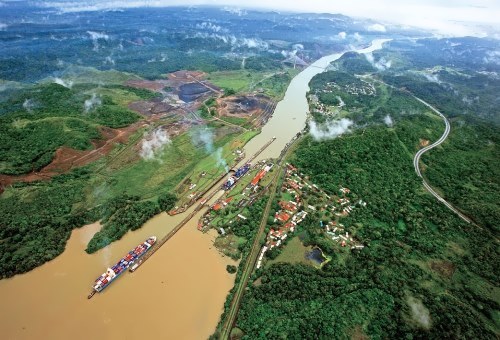 Panama Canal is the only navigable canal, which connects the Atlantic and Pacific Oceans. It was dug through the Isthmus of Panama for ten years, from 1904 to 1914. Since that time, the sea route from New York to San Francisco shortened more than doubled, from 22 500 km to 9000 km. The total length of the channel is 81.6 km. Since 2000, the channel is owned by the government of Panama.
Oceangoing vessels that are headed from the Atlantic Ocean to the Pacific came to gateways, where they gradually raised to a height of 26 m. Then, on the waters of an artificial Lake Gatun ships sail to other gateways and come to the Pacific Ocean. After about nine hours of travelling they are in the Bay of Panama.
From 30 to 45 vessels of different types and sizes pass through the channel every day. Payment depends on the tonnage. 40 thousand tons are the maximum allowed. In total about 14 thousand ships are ferried every year.
END_OF_DOCUMENT_TOKEN_TO_BE_REPLACED

Madness on the throne 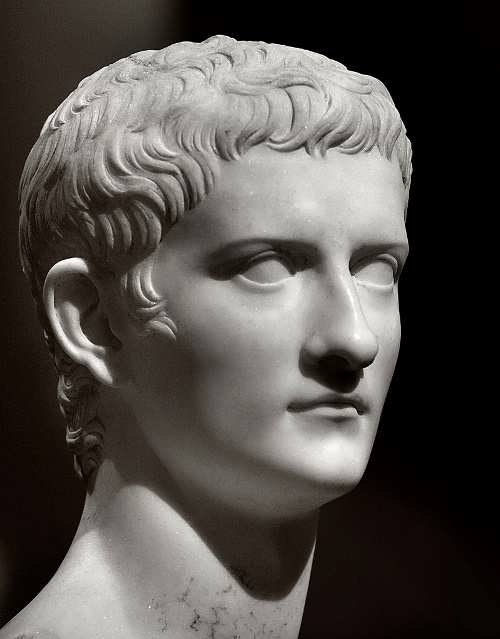 Madness on the throne. Caligula

This is perhaps the most famous and vivid case of cruelty and madness on the throne. Although Caligula ruled for only 4 years (from 37 to 41) he had done a lot of troubles. His psychological disorder could be seen in some of the laws. It was illegal to look at Emperor’s face. Caligula used numerous executions and tortures, and made a lot of effort to develop new methods of killing his enemies. He turned imperial palace into a real whorehouse. Caligula ordered to build luxury marble stables for his favorite horse Incitatus. The entire army of servants was around the horse. The Emperor gave his horse official citizenship of Rome and wanted even to make him a senator of the state. His political opponents were outraged by the crazy behavior of the head of state and successfully organized a plot to kill Caligula. Emperor’s body was thrown to the dogs.
END_OF_DOCUMENT_TOKEN_TO_BE_REPLACED 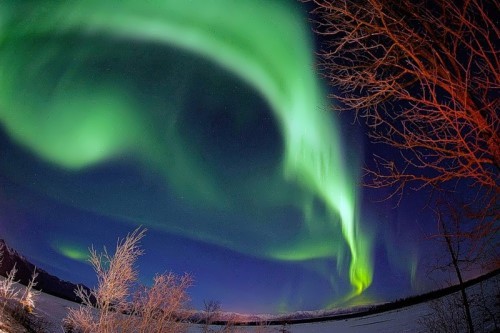 Auroras are dazzling displays of colored light that sometimes appear in the night sky. They can be seen in far northern and far southern regions. Auroras are named after Aurora, the ancient Roman goddess of the dawn.
An aurora constantly changes shape as the light moves across the sky. Its colors are determined by the different gases that give off the light.
The aurora borealis is visible only in the northern skies and is thus also known as the northern lights. The aurora australis occurs in the southern skies.
Auroras result from the interaction of Earth’s magnetic field with ionic gas particles, protons, and electrons streaming outward from the Sun. Solar storms result in magnetic disturbances that lead to coronal mass ejections of ionic charged particles in solar “winds.” As the magnetic particles pass Earth, the plasma streams interact with Earth’s magnetosphere. The magnetic interactions excite electron transitions that result in the emission of visible light.
END_OF_DOCUMENT_TOKEN_TO_BE_REPLACED 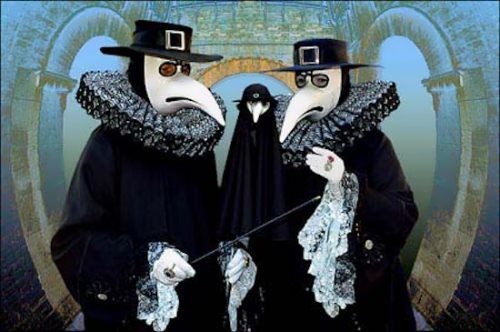 For hundreds of years people have called plague the Black Death. But in enlightened and civilized age when medicine is developing rapidly people gradually began to forget about this disease. And almost no one knows that the plague is not just a severe infection. In the Middle Ages its epidemics and pandemics took as many lives as all the wars, and natural disasters put together over the last century. But now mankind has not won plague. We just got a temporary advantage with the help of antibiotics.
So what is the plague, how it influenced our civilization and why we cannot finally win it?
According to recent research, the plague appeared on the Earth about 2-3 thousand years ago as a result of mutations of the yersinia pseudotuberculosis. However, some scholars, including Russian and Soviet biologist and epidemiologist M.V. Supotnitsky believe that the plague raged on the planet in 1200 BC. This is evidenced by the so-called plague of the Philistines, as described in the Bible, the First Book of Kings, which tells about the war between the Philistines and the Israelites followed the epidemic. The experts came to the conclusion that it was the bubonic plague. The Fourth Book of Kings tells the story of Assyrian king Sennacherib who wanted to conquer Jerusalem. The Assyrian army laid siege to the city, but an epidemic killed 185 thousand attackers overnight.
END_OF_DOCUMENT_TOKEN_TO_BE_REPLACED 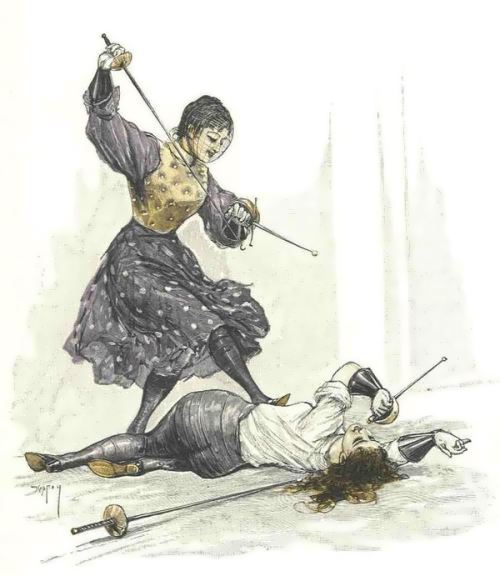 Duel is considered to be the domain of men. But there were duels between women too. To tell the truth their duels were much more bloody and sophisticated.
The most legendary female duel is considered a duel between Marquise de Nesle and Duchesse de Polignac in autumn 1624. They fought because of Duke of Richelieu (who later became Cardinal). The duel took part in the Bois de Boulogne. Duchesse hurt her opponent’s ear and won the duel. This fight was not something special, but thanks to Richelieu, who wrote about it in his notes, the duel left mark in history.
The first reliable information about female duels dates back to the XVI century. The peak of fashion for ladies’ duel was in the middle of the XVII century.
In France, Italy, England and Germany women crossed swords or used guns almost on any occasion. The same dress, lovers, sidelong glance could be a reason for the fight. 8 of 10 duels between women were fatal. Women’s duels, in fact, had no rules.
END_OF_DOCUMENT_TOKEN_TO_BE_REPLACED 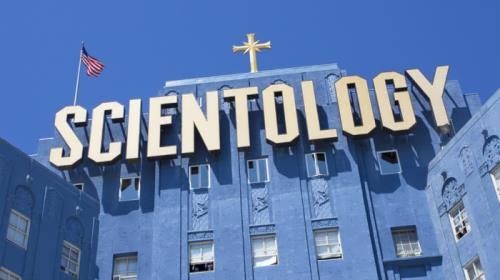 Scientology is a complex set of beliefs that combines a religious and church-like structure with a set of unique techniques for personal and spiritual development. It is probably the most widespread and well-known New Religious Movement founded in the 20th Century.
Many critics don’t consider Scientology to be a religion at all.
Scientology was founded by Layafette Ron Hubbard (1911 – 86), a science-fiction writer. Hubbard possessed two doctorate degrees, was a naval commander and war hero and was a noted international explorer. But critics claim that the degrees were of the mail-order variety; he was only ever in command of a small naval escort vessel and tales of his exploring exploits were much exaggerated.
Scientology began as Dianetics – Hubbard’s theory of the mind and mental health. It was published in 1950 in the periodical Amazing Science Fiction.
END_OF_DOCUMENT_TOKEN_TO_BE_REPLACED