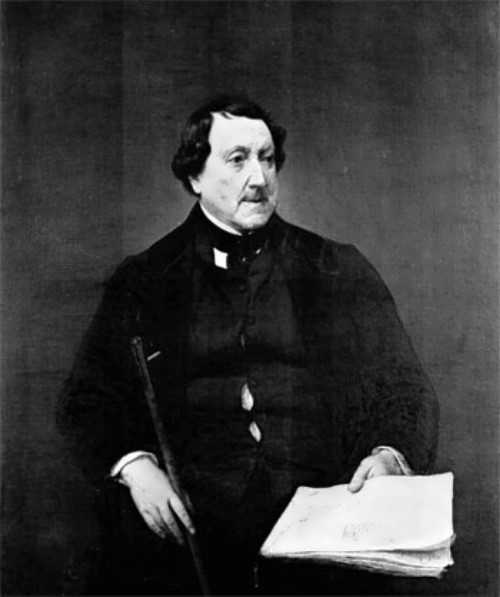 Gioachino Rossini (1792-1868) was a brilliant Italian composer, who lived in France. Opera The Barber of Seville (1816), based on Beaumarchais’ comedy, brought maestro worldwide fame. He created it just for twenty days. Musicologists are still arguing about one mystery: why brilliant Rossini wrote several operas a year for twenty years and had not created any for the next forty years?
The composer was coming to his home in Paris and saw reporters: “Why do not you write operas any more, maestro? They say, for the beautiful melodies you gave your soul to the devil for 20 years, but the contract has expired, and now you can’t create!”

Maestro rushed into the house.”Damn scribblers! Why do they think about the devil?!” – exhausted Rossini sat in a massive chair in his apartment. In his homeland, in Italy everybody saw the evil eye in everything. And in the theater, where his mother, an opera singer, performed, they even could not step without talismans. There was a cleaner in the theater who knew a lot of different spells. She told Gioachino’s mother that the boy was too greedy. It was true. The boy was hungry for music and food. And gluttony is one of the deadly sins. Rossini wept only twice in his life: the first time when his opera “The Barber of Seville” was a fiasco, and the second, when the cook dropped the dish with pasta, cooked with special recipe.
Even as a child Gioachino learned to play every instrument of the orchestra. At the age of 8 he sang with the choir boys and already at the age of twelve played tenor roles in plays. He wandered through the cities and theaters in Italy, because he needed money to help his numerous relatives. In his youth, he had to play in churches, orchestras, at private receptions, give music lessons, sing in operas.
16-year-old Rossini wrote his first opera “Demetrio e Polibio”. He had created 36 stage works for 20 years. One day his admirers decided to install a statue in honor of beloved composer. “How much will it cost?” asked the maestro. “20 thousand lire.” Rossini whistled: “Gentelmen, do not you want to give this money to me? For the same amount of money I would willingly stand here myself!”
Once Gioachino saw the theater cleaner in his dream. She stared into his eyes and whispered: “You are greedy!” She put an evil eye on him, old witch! He couldn’t compose music for “Othello” for the Neapolitan theater “Del Fondo”. Worried Rossini began to pray to Madonna. And she helped. But extremely painfully. Director of the theater locked the composer in a room. “There is a plate of spaghetti on the table! You’ll get nothing else until it is completed!” he shouted. Hunger had helped, and work would be finished in the morning.
Hard to believe, but most premieres of his operas were fiascos. But Madonna helped maestro – the second performance was successful and the third – a triumph. Mysticism…
The most fateful was the premiere of “The Barber of Seville” on February 20, 1816 in the Roman theater “Argentina”. Evil spirits showed their power. Renowned bass Dzenobio Vitarelli was known as a man with an evil eye. Rossini pleaded theater bosses did not give him the role of Basilio, but all in vain. As soon as Vitarelli started rehearsing, Duke Sforza Cesarini, the owner and director of the theater, died. But the premiere had to be held in time. During the performance damn Dzenobio fell down and injured his face. Then a huge black cat (Satan!) appeared on the scene and started jumping up like mad on the singers. And the audience began meowing worse than the black monster.

The next day there was a huge queue next to the theater, everybody wanted to enjoy the spectacular failure.
After the performance Rossini saw a huge crowd, coming to his house. He was horrified. “They’re going to kill me!” the composer decided and ran. But then he heard the loud voice of the singer Manuel Garcia,”Brilliant Rossini, the streets of Rome welcomes you for your great music!”
The premiere of the latest Rossini’s opera “William Tell” was held in Paris on August 3, 1829.
And for 40 years he didn’t compose a single opera. His beloved wife Olympia often laughed: “You’re too fat and lazy to create scenic music!” Sometimes at night Rossini thought maybe it was an evil spirit who prevented him from creating operas.
In October 1868 maestro fell ill. Doctors wanted to help him, but 76-year-old Rossini was losing his strength.
On October 13th maestro even tried to joke: “It’s Friday the 13th – dark date when evil comes to the ground. But, Madonna, why do not you want to take me? Do you hear me?” Madonna heard. A few hours later, on October 13, 1868, she took maestro. And there, in the kingdom of heaven, he must have again started to compose his beautiful operas.