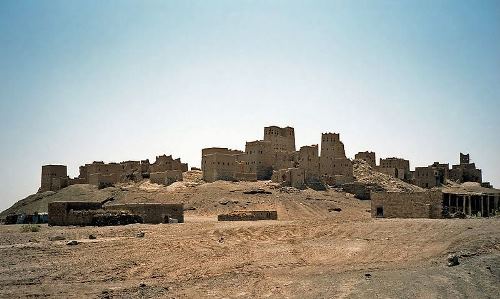 Queen of Sheba is one of the most famous biblical characters. She is first mentioned in the Third Book of the Old Testament Kings. And although her existence is considered unproven, the image of Queen of Sheba had a significant impact on the folklore and literature of the peoples of Europe, North Africa and the Middle East.
In our days, filmmakers have repeatedly use this character in their works. But where was her country?
Scientists had been trying to enter the city of Marib where in ancient times the legendary Queen of Sheba ruled. However, its location for a long time remained a secret that was carefully kept by the local Arab tribes and the authorities of Yemen. In 1976, another attempt to enter the coveted city was made by the French. They corresponded with the Yemeni authorities for seven long years, until they obtained permission to visit the ruins by one person who was only allowed to examine them. And then they decided to send a Parisian photographer from the Figaro magazine, who knows how to shoot with a hidden camera.

He managed to see and take pictures of the massive columns of ruined temples and palaces, as well as several sculptures dating back to the period of VI-IV centuries BC. Some were made of marble, others of bronze, and others of alabaster. Some figures had clearly Sumerian features, others – Parthian. All of them were inside the ruins, leaning against the stones. The photographer was also able to take pictures of a kind of security certificate, carved in stone: “The people of Marib erected this temple under the auspices of their gods, kings and all the people of the Saba state. Whoever damages these walls or takes away sculptures, he will die himself, and his family will be damned.”
Just after taking pictures of this text, the photographer was asked to leave. The inscription was made on a fragment of a bas-relief inside the building, from which only the foundation remained. According to the Figaro photographer, he managed to photograph only a hundredth of the possible. 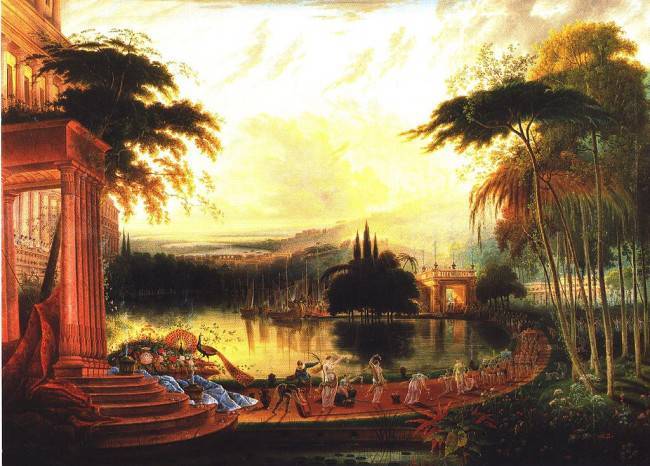 Arrival of the Queen of Sheba, painting by Samuel Coleman

Queen of Sheba belonged to the clan of the Sabaean kings-priests – mukarrib. According to the Ethiopian legend, in childhood the Queen of Sheba was called Makeda. She was born around 1020 BC in the country of Ophir, which stretched across the entire east coast of Africa, the Arabian Peninsula and the island of Madagascar. The inhabitants of Ophir were fair-skinned, tall and virtuous. They were known as good warriors, herded herds of goats, sheep and camels, hunted deer and lions, mined precious stones, gold, copper and knew how to make bronze. The capital of Ophir – the city of Axum – was in Ethiopia. At the age of fifteen, Makeda went to reign in South Arabia, in the Sabean kingdom, where she became Queen of Sheba. She ruled the kingdom for about forty years.
The capital of the Sabean kingdom was the city of Marib. The Qur’an says that Queen and her people worshiped the Sun. Relatively recently, scientists have established that the solar deity Shame played an important role in the folk religion of ancient Yemen. Legends say that the queen initially worshiped the stars, the moon, the sun and Venus. She had the honorary title of the High Priestess of planetary collegiality and arranged in her palace Cathedrals of Wisdom. She was the supreme priestess of a certain southern cult of tender passion. Only after traveling to King Solomon she became acquainted with Judaism. 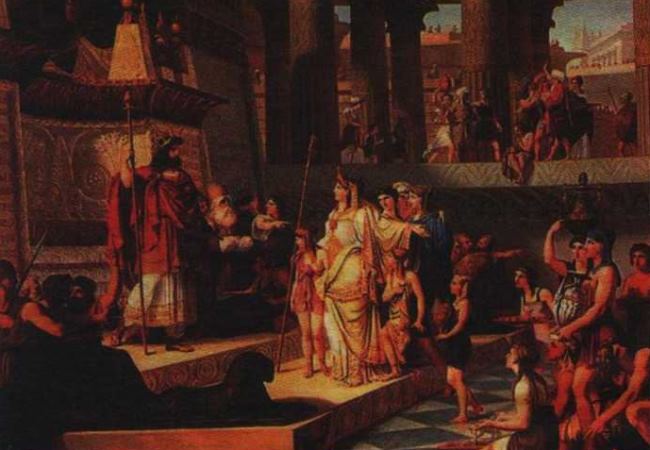 Giovanni Demina. Solomon and the Queen of Sheba

According to the descriptions of ancient authors, the lords of Saba lived in marble palaces surrounded by gardens with springs and fountains, where birds sang, fragrant flowers and the aroma of spices spread everywhere. The pride of the Sabean kingdom was a giant dam west of Marib, which kept water in an artificial lake. Through a complex system of canals and drains, the lake watered peasant fields, as well as fruit plantations and orchards at temples and palaces. The length of the stone dam reached 600, and the height was 15 meters. Water was supplied to the canal system through two ingenious sluice. Rainwater, once a year brought by a tropical hurricane from the Indian Ocean, was collected behind the dam. The Qur’an claims that the irrigation system was destroyed by heaven as punishment for paganism. In reality, the catastrophe was caused by the Romans, who plundered the city and destroyed the sluice in punishment for the desperate resistance of the inhabitants of Marib.
The journey of Bilqis (as the Queen of Sheba is called in later Arabic texts) to Solomon became one of the most famous biblical stories. She went on a seven-hundred-kilometer journey with a caravan of 797 camels. Her retinue consisted of black dwarfs, and a security escort – of tall light-skinned giants. On the head of the queen there was a crown adorned with ostrich feathers, and on the little finger there was a ring with an Asterix stone, which is unknown to modern science. 73 ships were hired to travel on water. 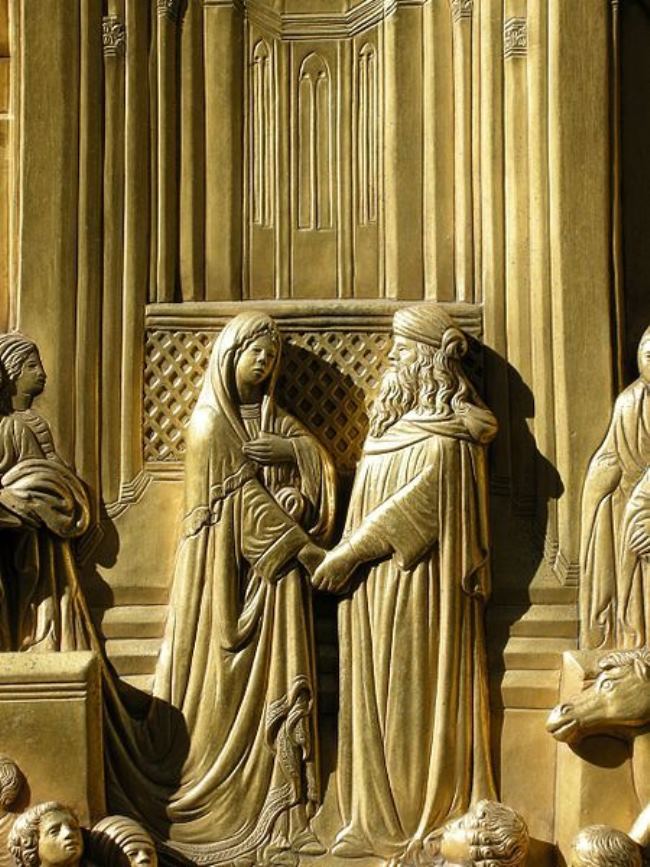 In Judea, the queen asked Solomon tricky questions, but all the answers of the lord were absolutely correct. Historians note that almost the majority of the queen’s riddles were based not on worldly wisdom, but on knowledge of the history of the Jewish people. Solomon was charmed by the beauty and mind of Bilqis. According to some traditions, he married the queen. Subsequently, the court of Solomon received horses, precious stones, jewelry made of gold and bronze from sultry Arabia. At that time, the most valuable was the incense oil for church incense. The queen also received expensive gifts in return and with all her subjects returned to her homeland. According to most legends, she had since ruled alone. But Bilqis had a son from Solomon named Menelik. He became the founder of a three-thousand-year-old dynasty of emperors of Abyssinia. At the end of her life, Queen of Sheba returned to Ethiopia, where by that time her matured son ruled.
Another Ethiopian legend tells that for a long time Bilqis kept the father’s name secret from her son. Then she sent him to Jerusalem, saying that he recognized his father from a portrait that Menelik should have looked at only in the temple of God. Having reached Jerusalem and having come to the temple for divine services, Menelik took out a portrait, but instead of a drawing he was surprised to find a small mirror. Having looked at his reflection, Menelik looked around all the people present in the temple, saw King Solomon among them, and by similarity guessed that he was his father … 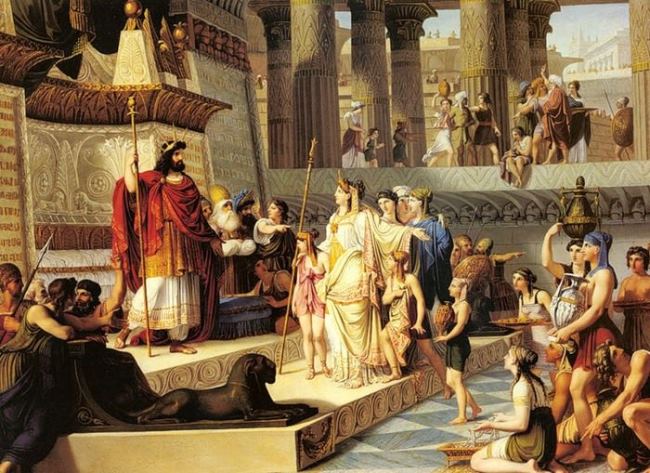 Meanwhile, recently, the case had helped to come close to unraveling a number of secrets of Ancient Arabia. A whole group of mining engineers from Europe, the USA and Saudi Arabia were invited to work in Yemen. Several archaeologists were included in this purely technical team. The first thing they discovered was the abundance of forgotten oases and ancient settlements. The desert in ancient times was far from being lifeless. There were pastures, hunting grounds, and mines of precious stones.
In northern Yemen, archaeologists have found ten sites with dumps of slag. The smelting furnaces showed that there they processed solid copper ore, made bronze. Ingots from Saba went to the countries of Africa, Mesopotamia and even to Europe.
All this proved that the successful metallurgists were not the Bedouins, but the settled tribes of a different ethnic origin. 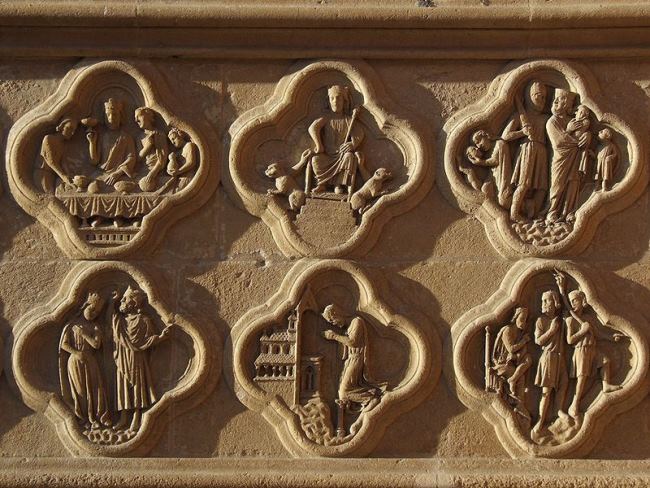 In the Amiens Cathedral, medallions with scenes of the legend 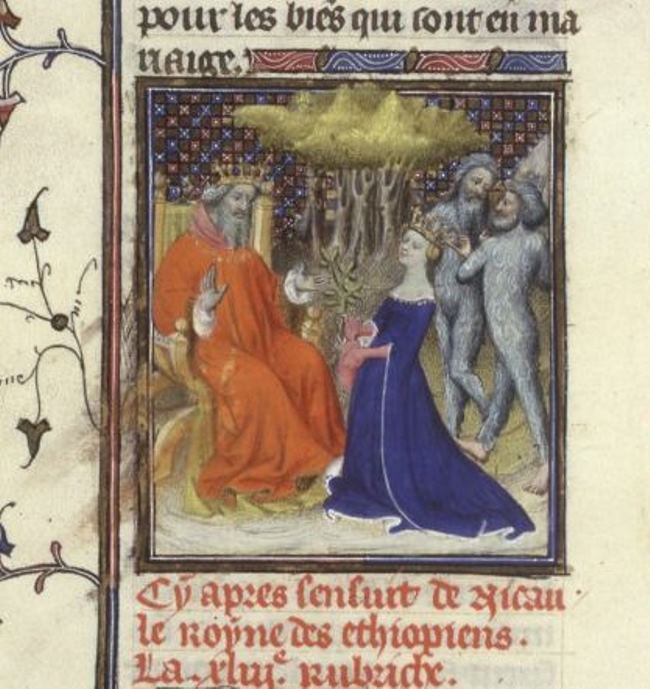 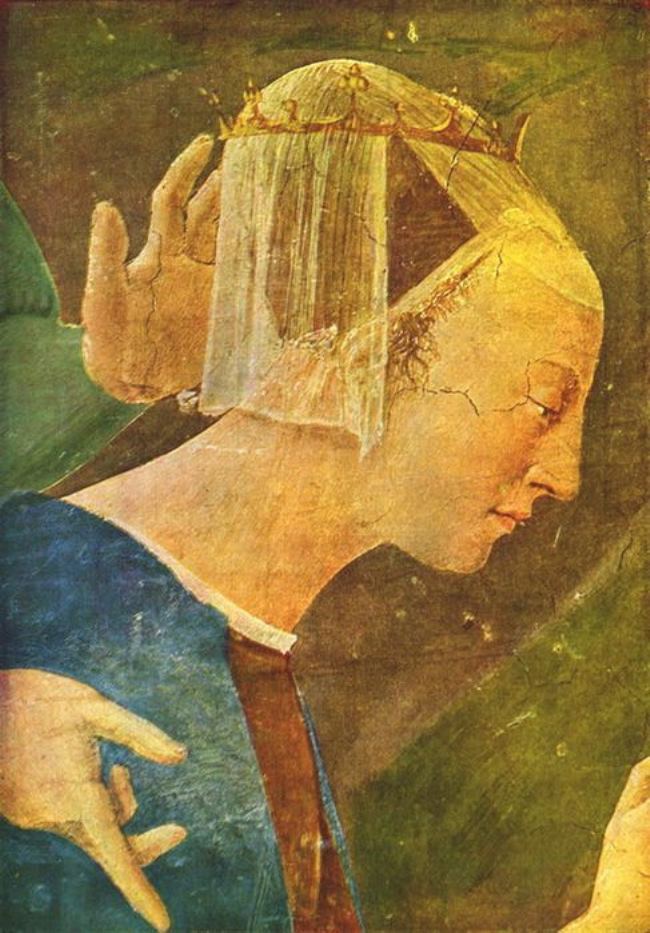 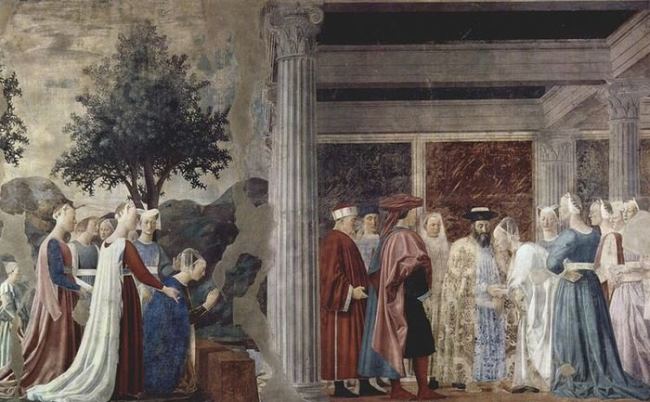 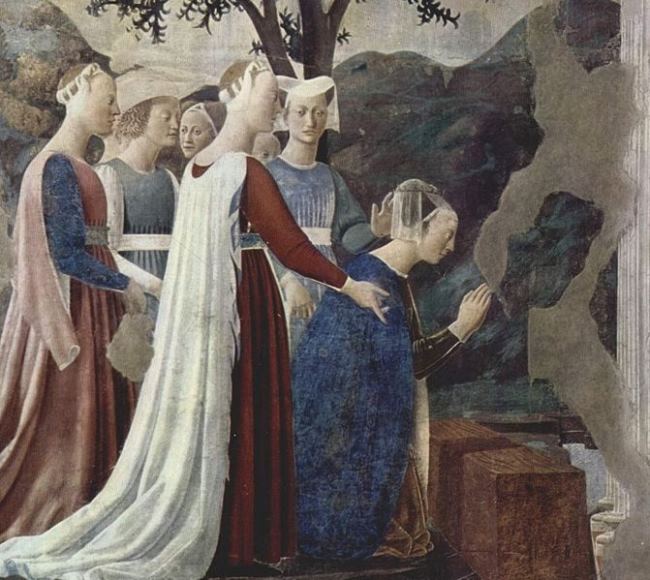 Queen of Sheba kneels before the Life-giving Tree, fresco by Piero della Francesca, Basilica of San Francesco in Arezzo 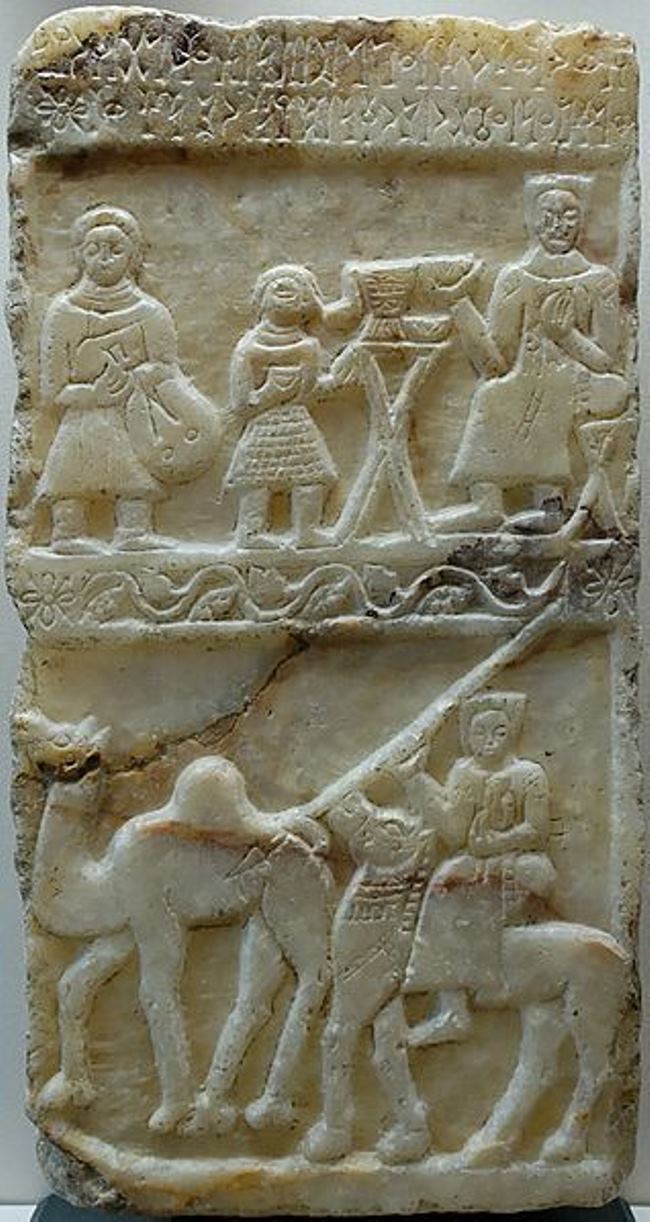 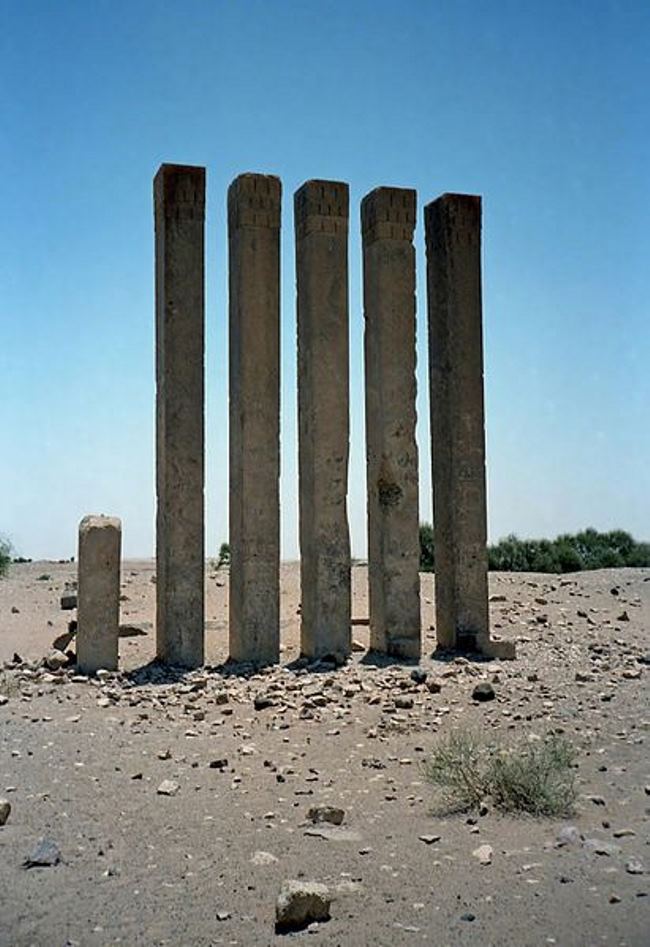 The ruins of the Temple of the Sun in Marib. Built in the VIII century BC, existed for 1000 years

The story of the birth of the queen, her accession, a visit to Jerusalem