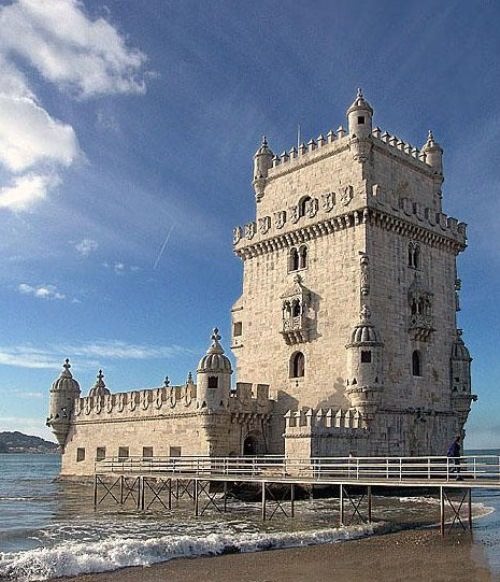 This tower looks like a miniature castle. It was built in the era of the Portuguese King John II the Perfect Prince (1455-1495). The place for it was chosen on the bank of the Tagus River, which flows into the Atlantic Ocean. The bastion was not only a defensive structure which protected Lisbon from pirates and other uninvited guests, but also a lighthouse. The Portuguese navigators went on long journeys from there.
King Juan II planned to build multiple defensive structures on the bank of the Tagus River at the entrance to the port: two bastions on the right bank of the river and one on the left. Two of them were built during the life of the monarch, and construction of Belem had just begun.

The work continued twenty years after the death of John II under his successor, King Manuel I (1469-1521). 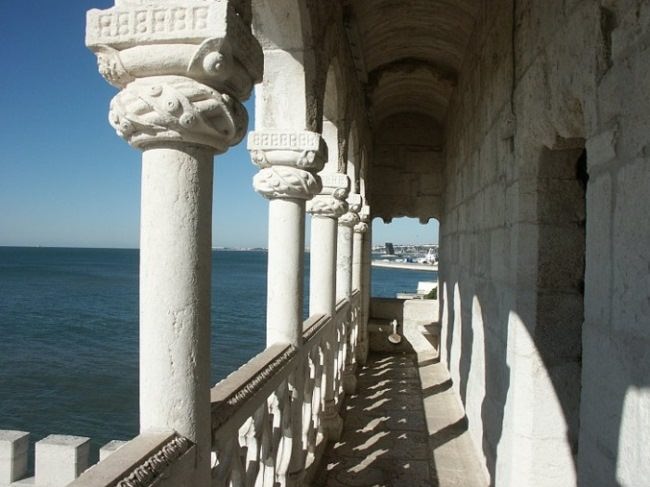 In the XV-XVI centuries, Portugal actively strengthened its colonies and became a sea power with its capital in Lisbon. King Manuel I was aware of the advantages of Lisbon and continued the policy of his predecessors. He expanded the country’s possessions, conquered new lands. During his reign Vasco da Gama went to the shores of India in 1497 and then was solemnly greeted by King Manuel I. This trip was very important for the king, for Lisbon, for the whole of Portugal. The sea route gave impetus to shipbuilding, contributed to the further development of navigation and fishing. Revenues from the sale of spices and other exotic goods brought from India, turned Lisbon into a major port of Europe. In 1515, on the order of Manuel I, they continued to build Belem tower. It was completed in the year of Manuel’s death, in 1521.
It was not possible to create an integral defensive complex. Only one tower, in which the features of Roman-Gothic and Arabian architecture were combined, survived. In some ways, this building was lucky. The most powerful earthquake of 1755, which destroyed the whole city, left a few buildings untouched, including the five-story Belem tower.
It stands on a hexagonal base. You can reach it only by the drawbridge. The front door shows the coat of arms of Manuel I and the two celestial spheres. In the walls of the bastion 18 loopholes were made. 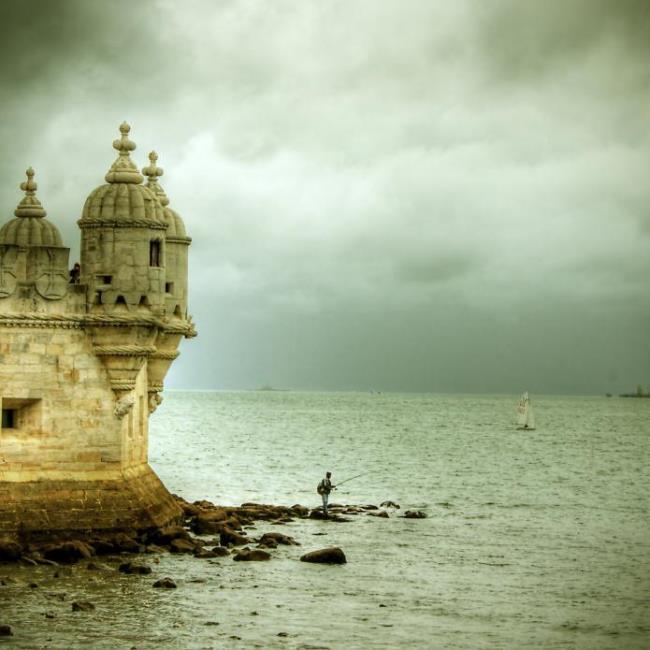 In the lower floor there is a Gothic hall, until the XI century it was used as an arsenal and a prison.
The Belem Tower was included in the UNESCO World Heritage List of Humanity in 1983. The figure of a rhinoceros, visible below the western watchtower, is the symbol of the tower. And the Belem Tower became the famous architectural emblem of Lisbon and Portugal. 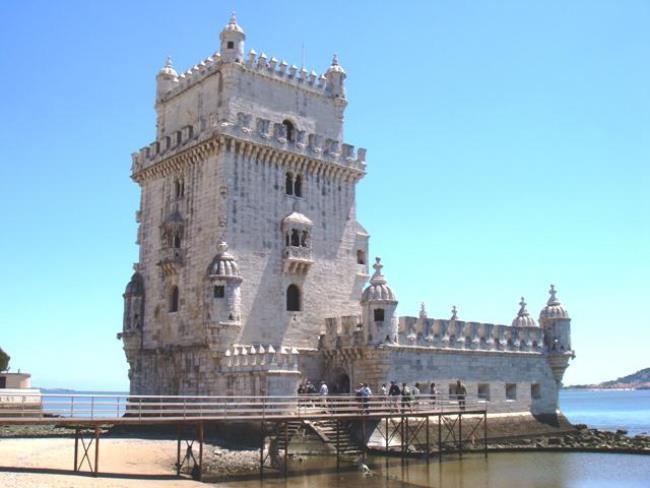 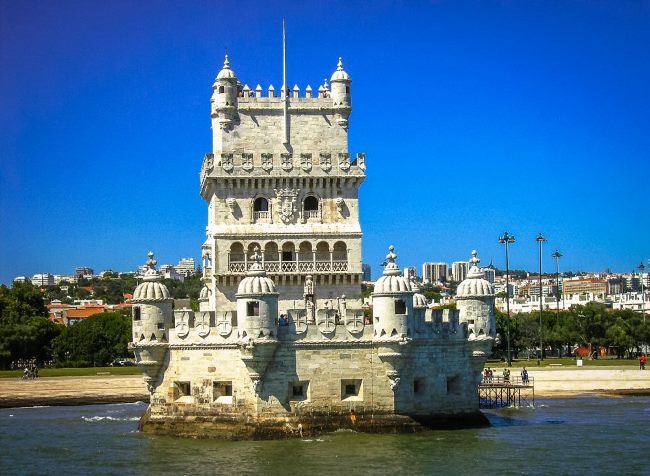 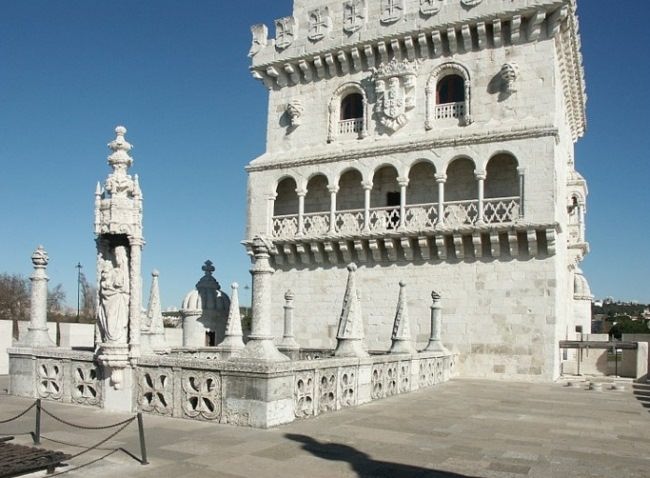 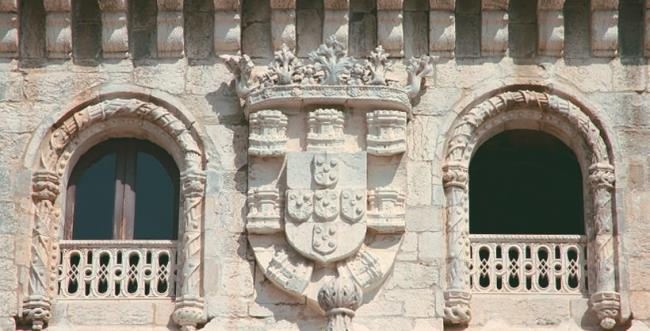 Coat of arms of Manuel I 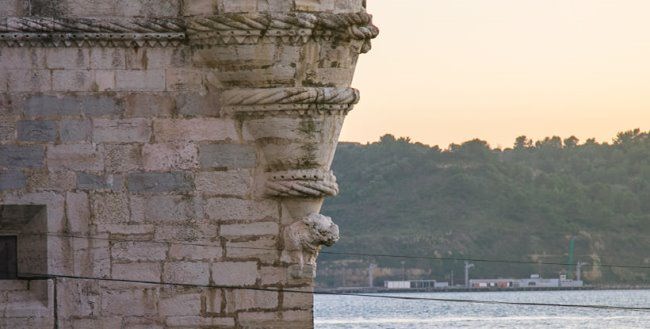 Figure of a rhinoceros 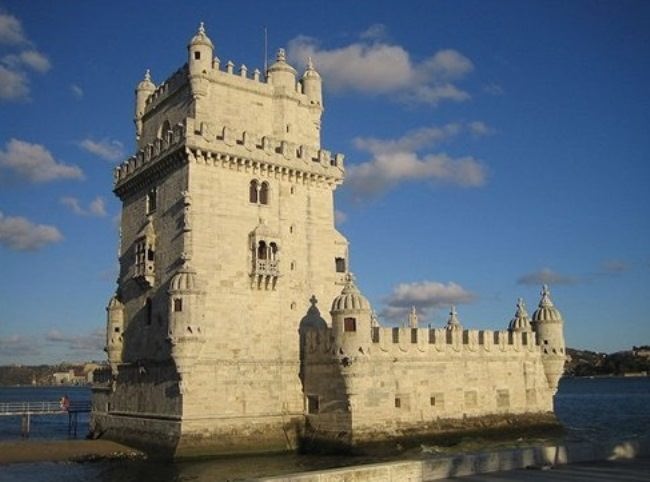 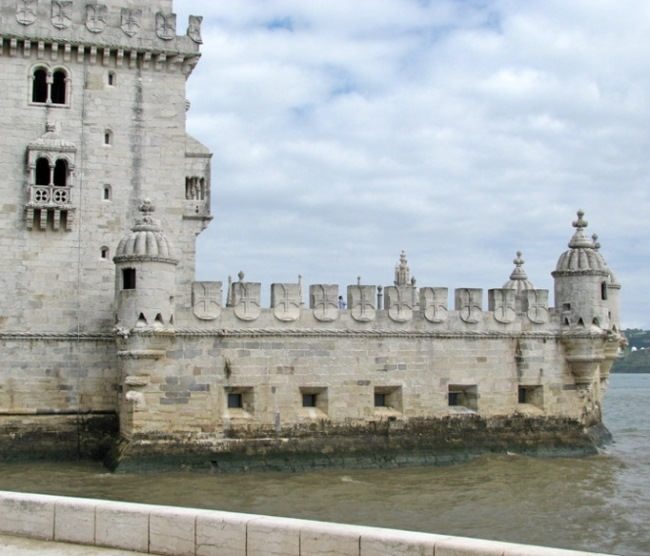 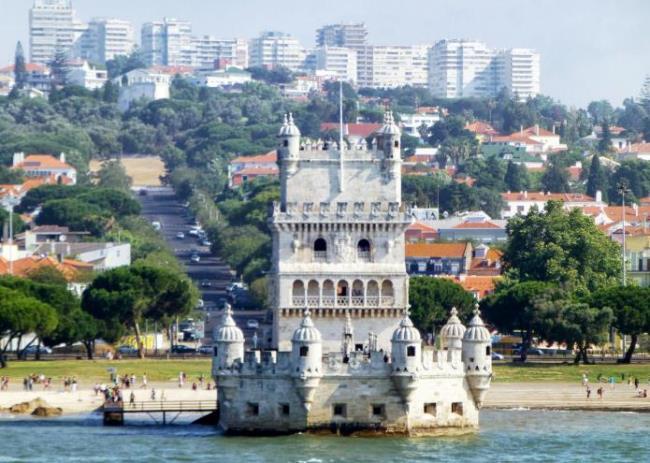 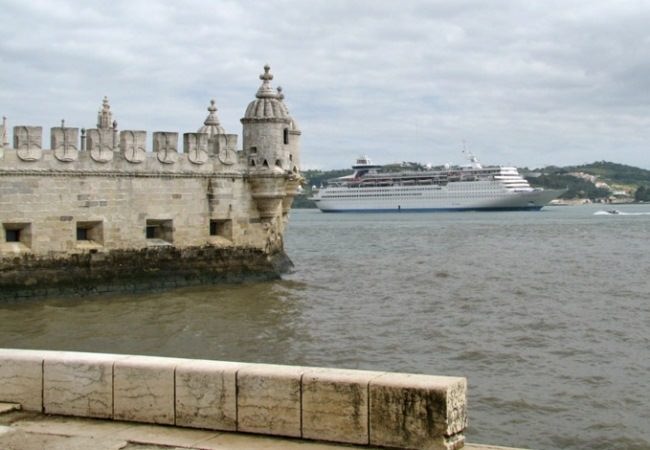 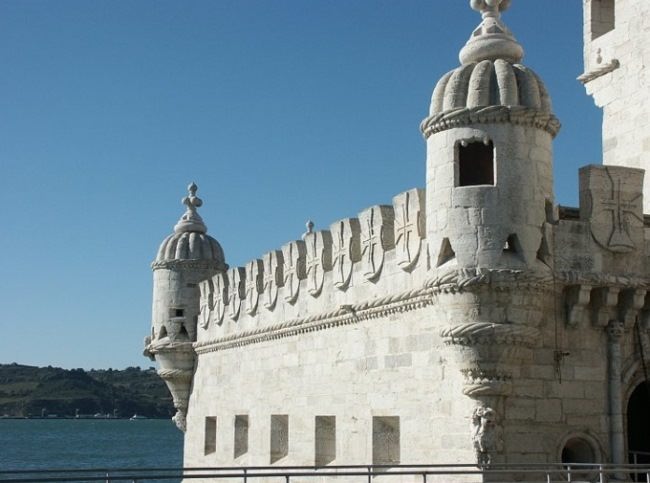 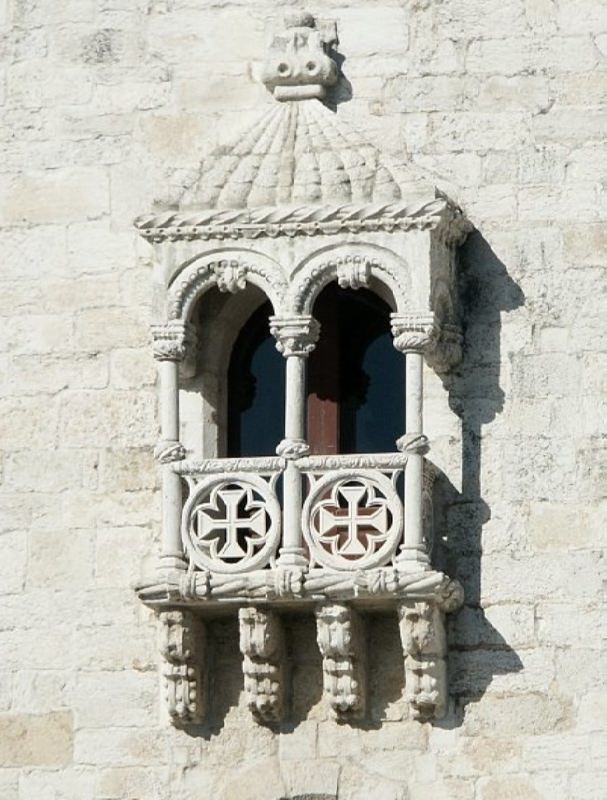 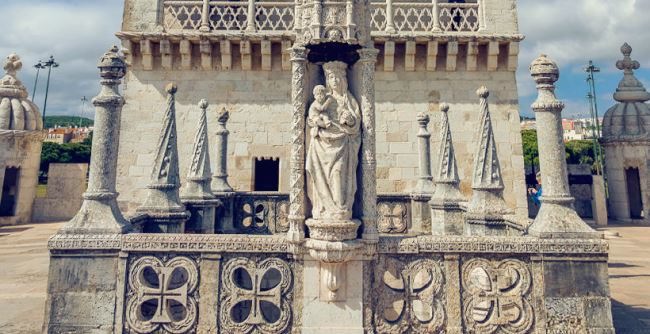 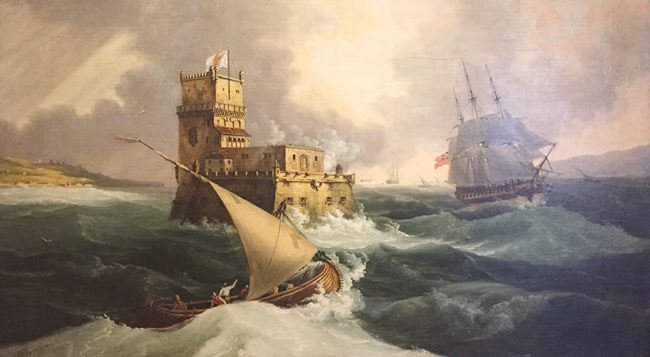 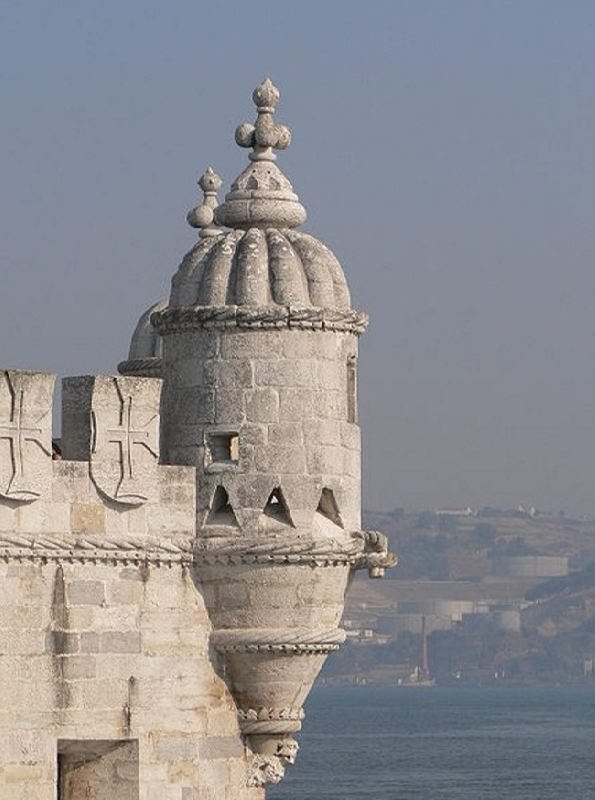 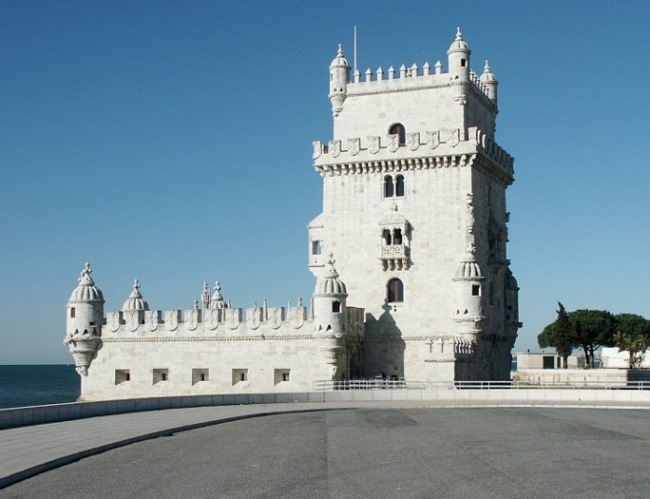 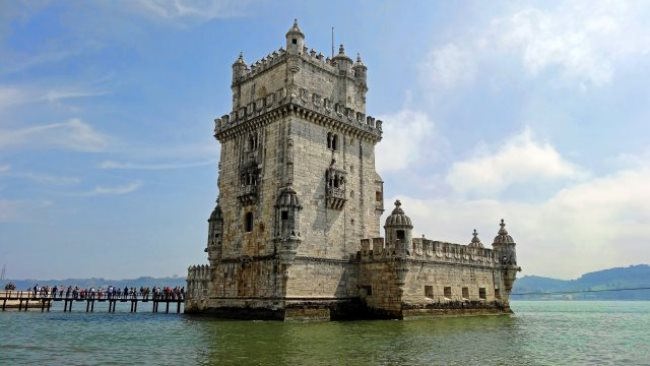