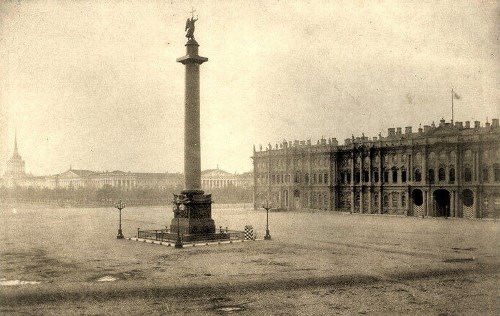 Alexandrian Column (Alexander Column) is on the main square of St. Petersburg.
In the late 20s of the XIX century, an open tender was announced. The French architect and engineer Auguste de Montferrand won it. Nicholas I insisted that the main part of the monument should be similar to the column of the emperor Trajan in Rome or the Vendome column in Paris, only higher and made from the monolith.
A granite rock, found in Finland, was used for the monolith. A prism, much larger than the size of the future column, was cut off from the rock. Huge stones for the foundation of the monument were cut down from the same rock. The largest weighed about 400 tons. They were taken to St. Petersburg by water, on a special barge.

The place for the installation of the column was already prepared. The foundation of the monument was built of half-meter thick granite blocks. A bronze box with coins minted in honor of the victory of 1812 were put in the center. 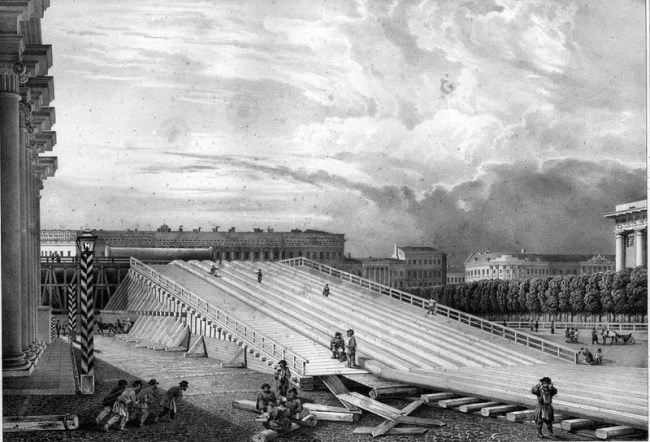 Album with pictures of Montferrand

By July 1832 the pedestal had already been completed, and the monolith of the column was approaching St. Petersburg. On August 30, 1832 a lot of people came to look at the rise of a giant column. Numerous spectators crowded at the windows and on the roof of the General Staff. The Tsar with his family also arrived. 2000 soldiers and 400 workers in just 1 hour and 45 minutes lifted a six-hundred-ton column with a height of almost 26 meters. On that day Nicholas I told the creator of the monument: “Montferrand, you’ve immortalized yourself!”
After the installation of the column, they had to fix four bas-relief plates, as well as other decor elements. The final polishing of the granite column lasted two years.
In parallel with the construction of the monument the sculptor B. I. Orlovsky made a figure of an angel with a cross, which was to complete the monument. The features of the angel reminded Alexander I. 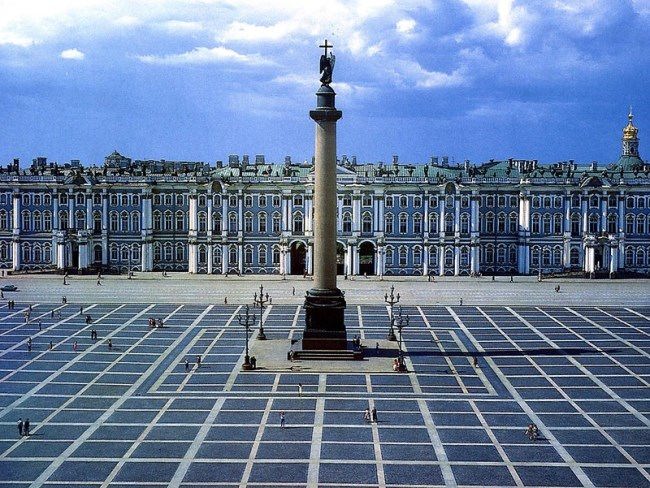 On August 30 (September 10), 1834 the solemn opening of the monument took place. One hundred thousand soldiers and officers participated in the parade on the occasion of the opening. There were a lot of people who fought with Napoleon in 1812.
The Alexander Column is still the tallest structure of its kind in the world (the total height is 47.5 meters). The column itself is not fixed on the base. The monument survived the storming of the Winter Palace and 900 days of the Leningrad blockade. However, the wings of the angel were pierced with shards, there were damages to bas-reliefs and even the granite itself.
The Alexander Column, built in memory of the heroic ancestors, is one of the main symbols of St. Petersburg.

Alexandrian Column on the coin 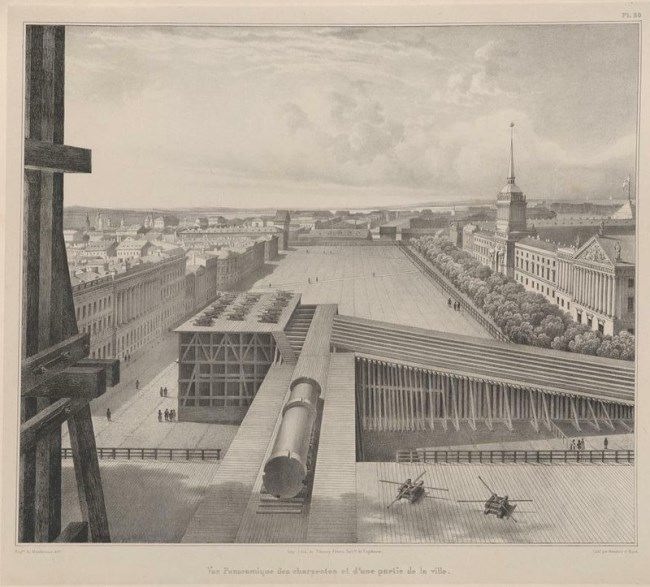 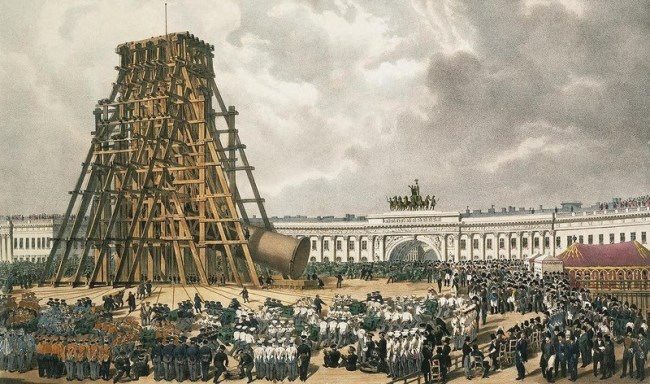 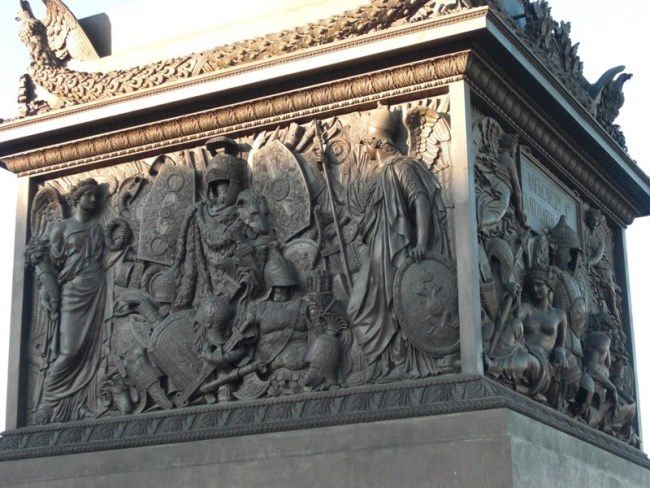 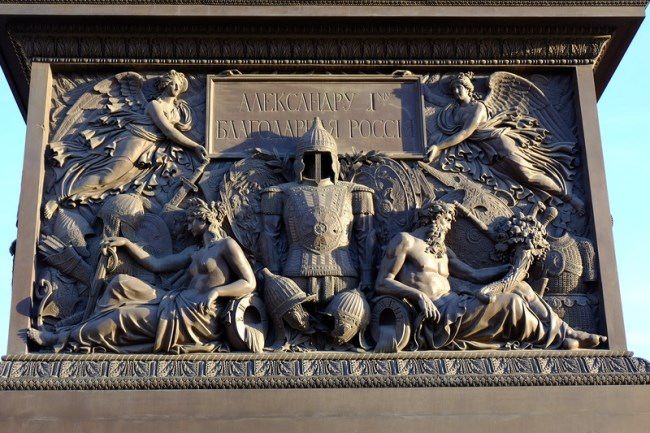 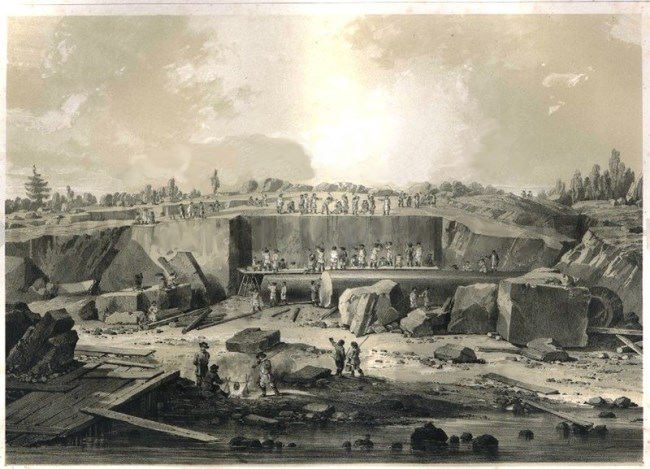 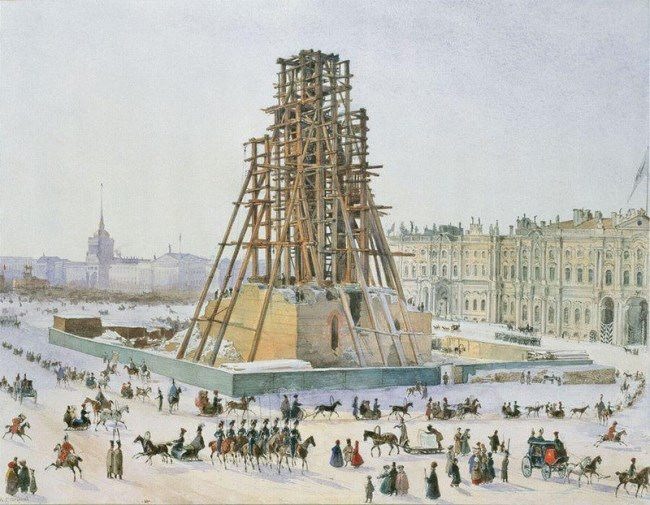 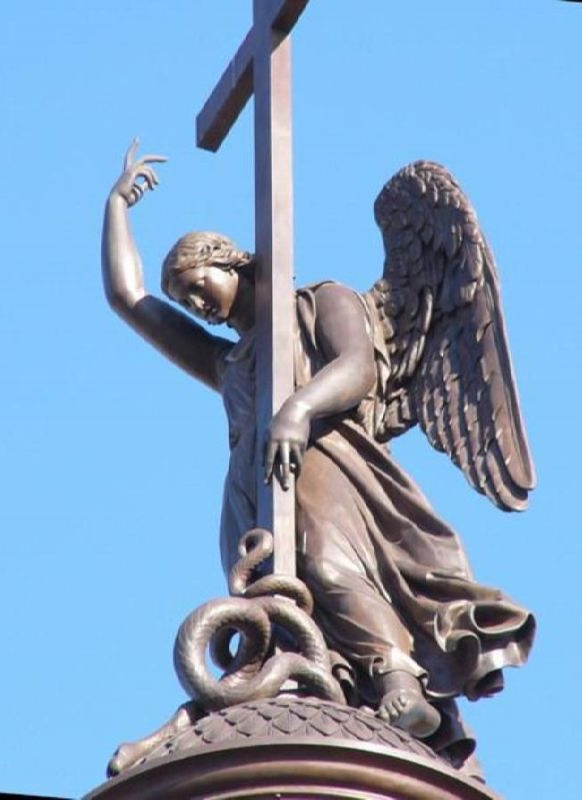 Figure of an angel with a cross 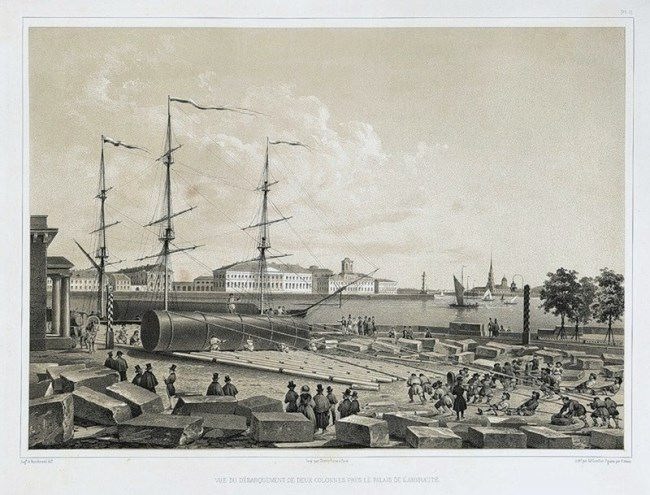 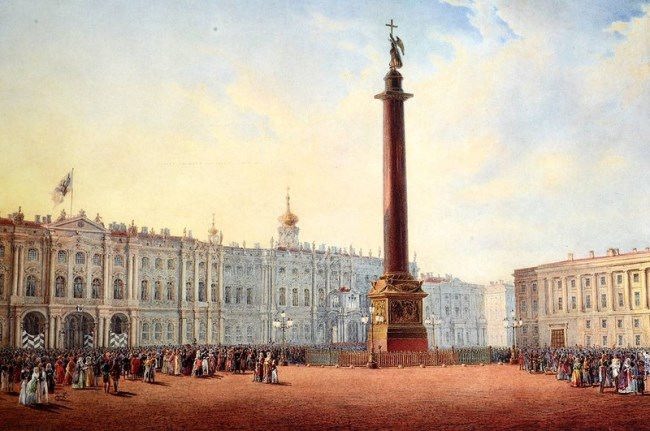 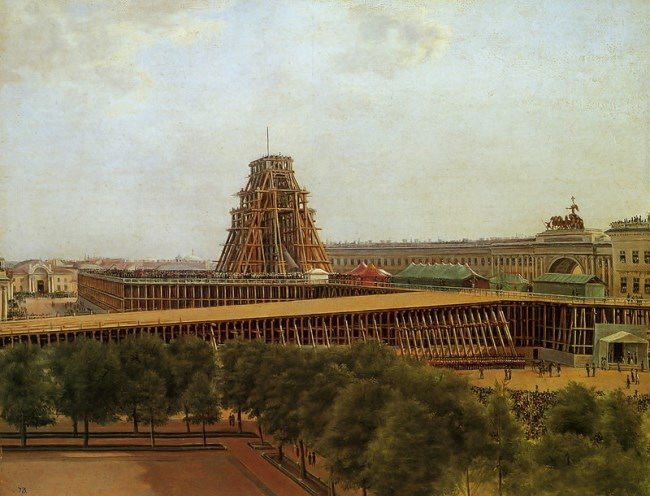 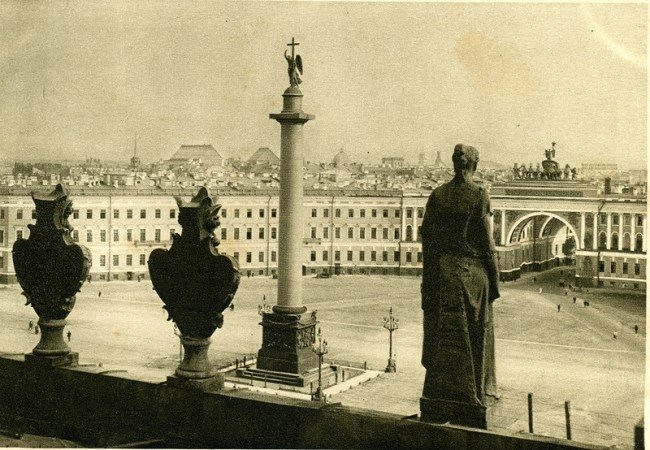 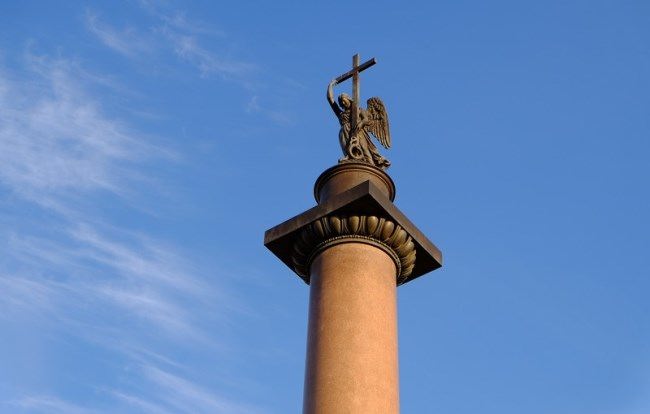 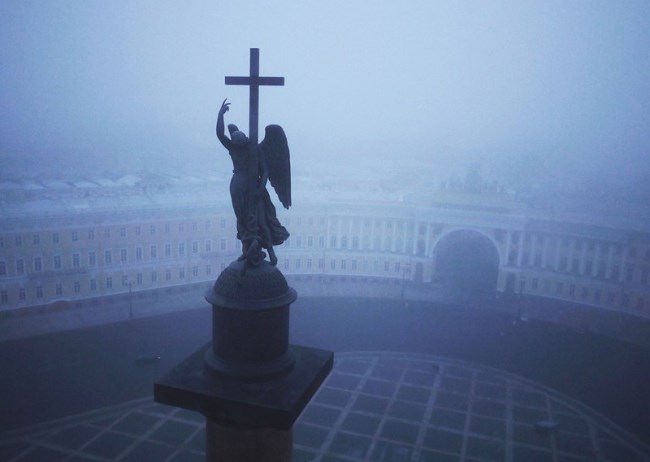 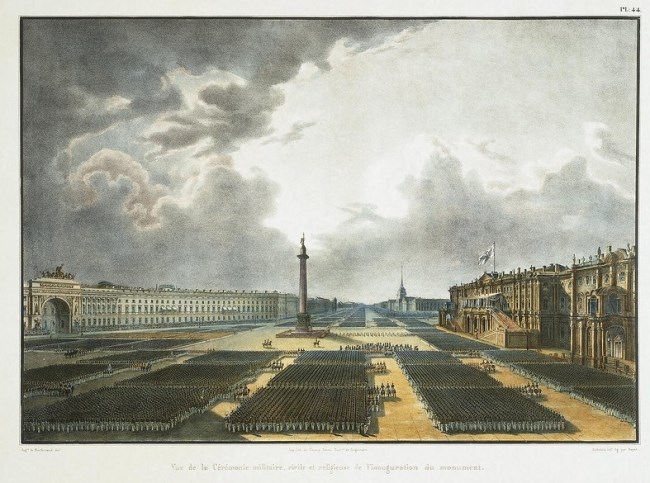 Parade at the opening of the Alexander Column in 1834 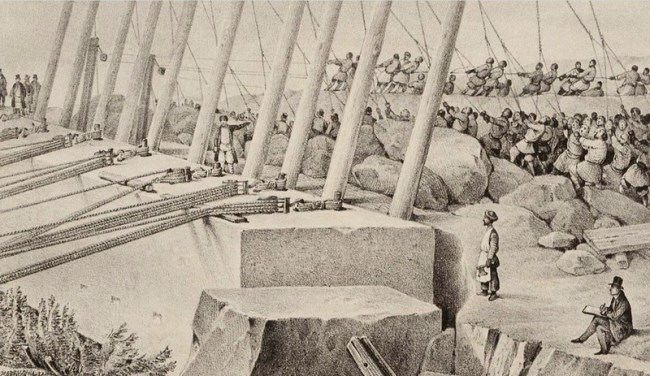