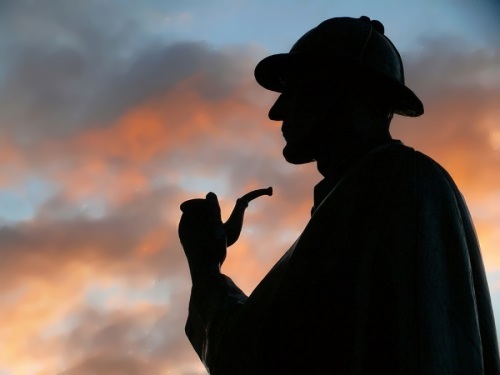 In the 1880s a young doctor wrote stories to pass the time while waiting for new patients. His stories were about a man who was very good at solving crimes. They were so popular that the doctor decided to give up medicine and become a writer. The doctor was Arthur Conan Doyle and his creation was Sherlock Holmes.
Sherlock and his famous friend Doctor Watson lived at 221b Baker Street. Their landlady was Mrs Hudson.
221b Baker Street is the world’s most famous address and people have been writing to it for more than 100 years. Most letters were from the United States and people asked Mr Holmes to help them with some problem, such as finding a missing relative (or a pet).
But the museum was opened only in 1990 there. Sherlock Holmes Museum is unique. There are no horrors, no mummies or hidden corpses, no wax figures… But you have a feeling as if the great detective had just left the room for a moment with Dr Watson, and Mrs Hudson is somewhere in the backrooms. The museum is filled with Holmes’ things – his violin, deerstalker and pipe, the Persian slipper in which he kept his tobacco, unanswered letters pinned to the wall with a knife, his magnifying glass… Dr Watson’s diary contains hand-written notes and extracts from The Hound of the Baskervilles. 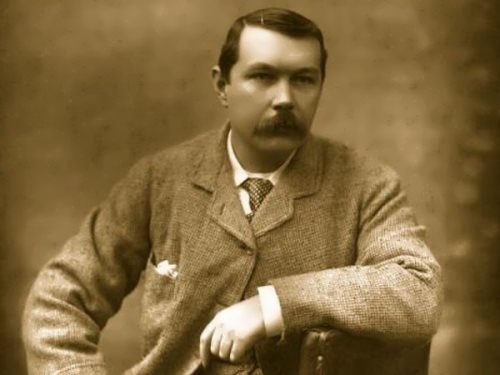 The Sherlock Holmes Adventures have been filmed for cinema, serialised for television, dramatised for stage and radio and published in at least 40 languages. According to the Guinness Book of World Records, Holmes is the most portrayed character on the screen. More than 76 actors played the famous detective in more than 211 films. Vasili Livanov is considered to be one of the best. 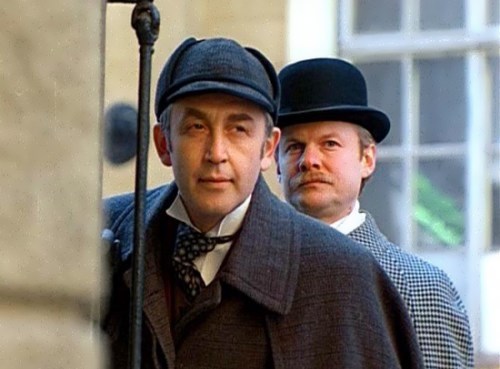 Holmes never said “Elementary, my dear Watson!” He said “Elementary” and “My dear Watson”-many times, but he never combined these phrases.
Holmes has become an inspiration for police and private detectives and his methods of deduction are still in use and much respected.
There is a monument to Sherlock Holmes in London. It was created by John Doubleday. 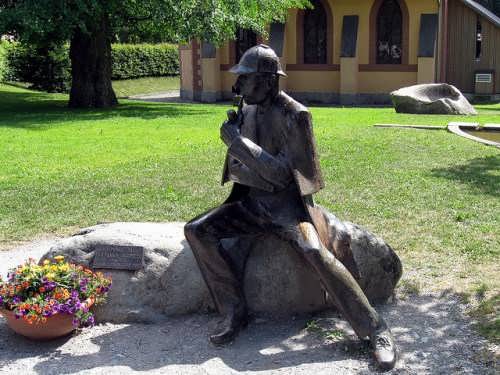 Did you know that Sherlock Holmes had a prototype?
One evening, about the turn of the last century, several guests sat around a dinner table discussing famous murders and unsolved crimes. One of the guests, Dr Joseph Bell, a famous Edinburgh surgeon and university professor, surprised the others with his unusual deductive abilities.
“The trouble with most people,” he said, “is that they see, but do not observe. Any really good detective ought to be able to tell, before a stranger has sat down, his occupation, habits, and past history through rapid observation and deduction. Glance at a man and you find his nationality written on his face, his means of living on his hands, and the rest of the story in his gait, manners, tattoo marks, and clothes.”
One of the guests remarked jokingly, “Why, Dr Bell might almost be Sherlock Holmes.”
“My dear sir, I am Sherlock Holmes,” Dr Bell said.
Dr Bell was not joking. He was, indeed, the original Sherlock Holmes, the prototype for the famous Conan Doyle’s creation.
Joseph Bell was Arthur Conan Doyle’s professor at the University of Edinburgh. Dr Bell could diagnose a patient’s disease just by observing him. 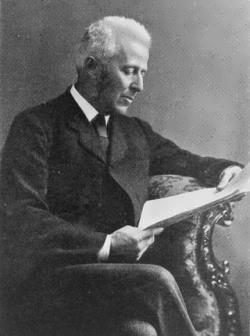 “He would sit in his receiving room, with a face like a red Indian, and diagnose people as they came in, before they even opened their mouths. He would tell them their symptoms, and even give them details of their past life, and hardly ever would he make a mistake,” wrote A. Conan Doyle.
It was exactly this kind of eagle-eyed observation that enabled Holmes to solve some of his most baffling crimes.
The students admired Dr Bell and thought him a magician. He never failed to surprise them.
One day Bell showed his students a glass of amber-coloured liquid. “This, gentlemen, contains a very potent drug,” he said. “To the taste it’s very bitter. Now I want to see how many of you gentlemen have educated the powers of observation. Of course, we might easily analyse it chemically, but I want you to test it by smell and taste. And as I don’t ask anything of my students which I wouldn’t be willing to do myself, I will taste it before passing it around.”
Dr Bell dipped his finger into the liquid, put his finger to his mouth, and made a grimace. Then he passed the glass around. Each student dipped his finger into the medicine, sucked it, and, of course, made a grimace because the liquid was very bitter.
Dr Bell then began laughing. “Gentlemen,” he said, “I’m sorry to say that none of you have developed the power of observation, which I so often speak about. You didn’t watch me closely. While I placed my forefinger in the bitter medicine, it was the middle finger which found its way into my mouth.”
Dr Bell’s detecting genius was known to the police. As an amateur detective, without official status, Dr Bell worked hand in hand with Sir Henry Littlejohn, Edinburgh police surgeon, and helped to solve several complicated crimes.
When Arthur Conan Doyle decided to write his first detective story he remembered Dr Bell and his unusual powers of observation and deduction. “I thought of my old teacher Joe Bell, of his eagle face, of his curious ways, of his deductive tricks,” Doyle recollected in his autobiography. “It is all very well to say that a man is clever, but the reader wants to see examples of it — such examples as Dr Bell gave us every day. The idea amused me. What should I call the fellow?”
He called him Sherlock Holmes.
Dr Bell liked A. Conan Doyle’s detective stories that popularized his ideas. “Doyle shows how easy it is, if only you can observe, to find out a lot more about your friends, to baffle a criminal and lay bare the manner of his crime.” In Bell’s opinion, every man can change the world of boredom into the world of excitement and adventure by developing the power of observation. Like Sherlock Holmes, we will be able to detect from a man’s hat that his wife does not love him, from a man’s cane that he is afraid of being murdered, from a man’s pipe that he is left-handed and careless. 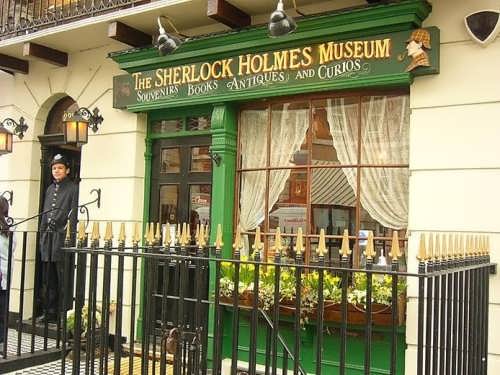 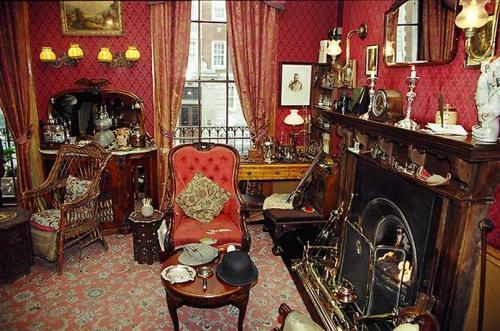 Conan Doyle believed in fairies?!
Sir Arthur Conan Doyle spent a lot of time doing research on spiritualism and the supernatural. Doyle also believed in fairies, and he wrote an entire book arguing that they exist!
In 1917, two girls from the Yorkshire village of Cottingley in England made photographs of themselves with fairies. Few people took the pictures seriously, but Doyle did, and he wrote a book about the girls, hoping he could convince others that the photos were real.
Doyle died in 1930, still believing fairies existed. In 1933, the girls confessed that the pictures were fakes. 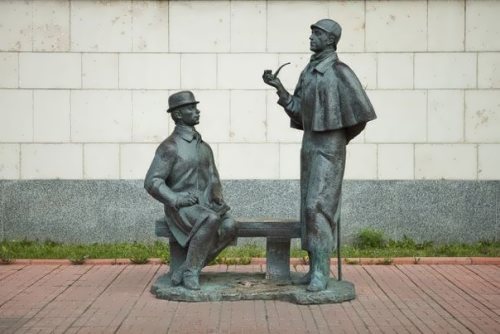